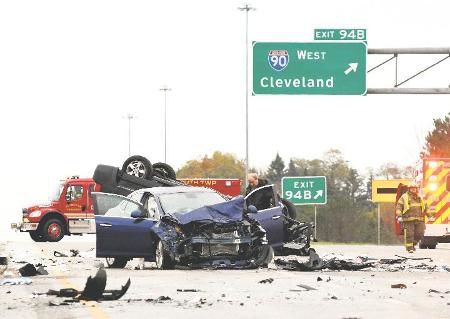 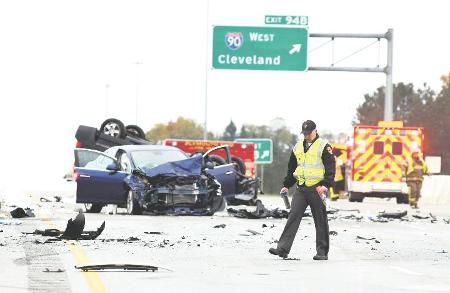 An Ohio State Highway Patrol trooper, investigates a multi-vehicle crash Friday morning on the north-bound lane of Route 11 on the Interstate 90 overpass on Friday morning.

An Ohio State Highway Patrol trooper, investigates a multi-vehicle crash Friday morning on the north-bound lane of Route 11 on the Interstate 90 overpass on Friday morning.

PLYMOUTH TOWNSHIP — A multi-vehicle crash on Route 11 Friday morning resulted in the death of a Jefferson woman.

The crash occurred around 7 a.m. in the northbound lanes of the Interstate 90 overpass on Route 11 and involved three vehicles, according to the Ohio State Highway Patrol. Marlene McClellan, 74, of Jefferson, was a passenger in one of the vehicles and she died at the scene, according to the Ashtabula County Coroner's Office.

A 2004 Chevrolet Trailblazer driven by Rebecca Pratt, 28, of Ashtabula, was merging on to Route 11 North from Interstate 90, according to a Highway Patrol media release. Pratt lost control and drove across all four lanes of Route 11 and struck a Dodge Caravan driven by Jody Pezzano, of Andover. Pezzano, who had serious injuries, was flown by helicopter to University Hospitals Cleveland, the release states.

The Dodge Caravan overturned on impact and was struck by a Buick Verano driven by McClellan's husband Arthur, 72, who was taken by ambulance to Ashtabula County Medical Center. His injuries were not considered life-threatening.

Ohio State Highway Patrol Lt. Tina Jackson said the cause of the crash remains under investigation. The northbound lanes on the overpass were closed while troopers investigated.

"A Chevy Trailblazer on the ramp lost control and struck a Dodge Caravan," Jackson said at the scene. "Then another car came along and struck them."

The Ohio State Highway Patrol said alcohol does not appear to be a factor in the crash.