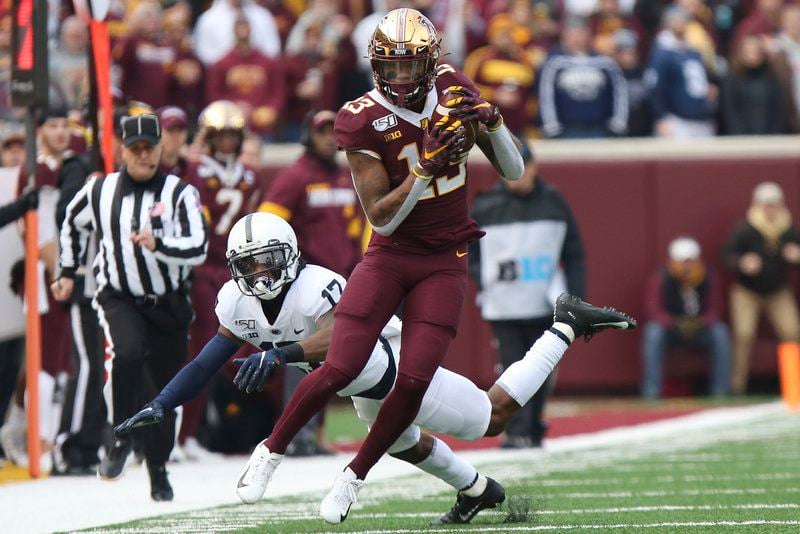 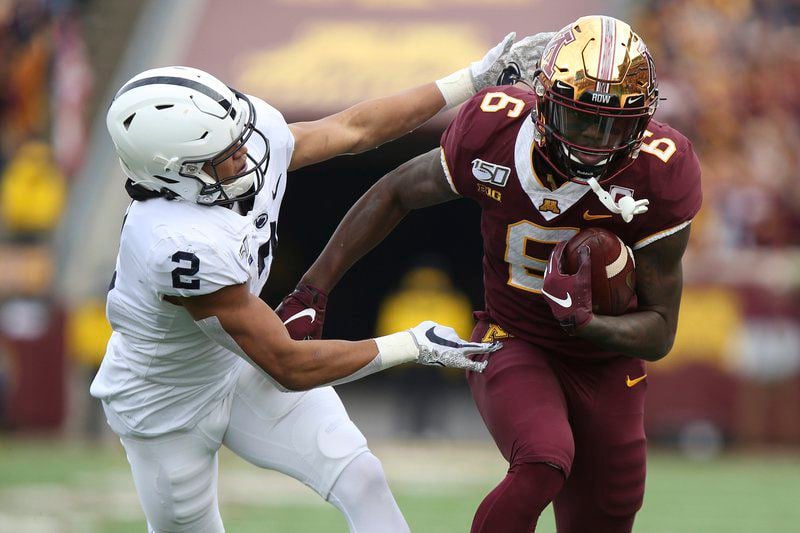 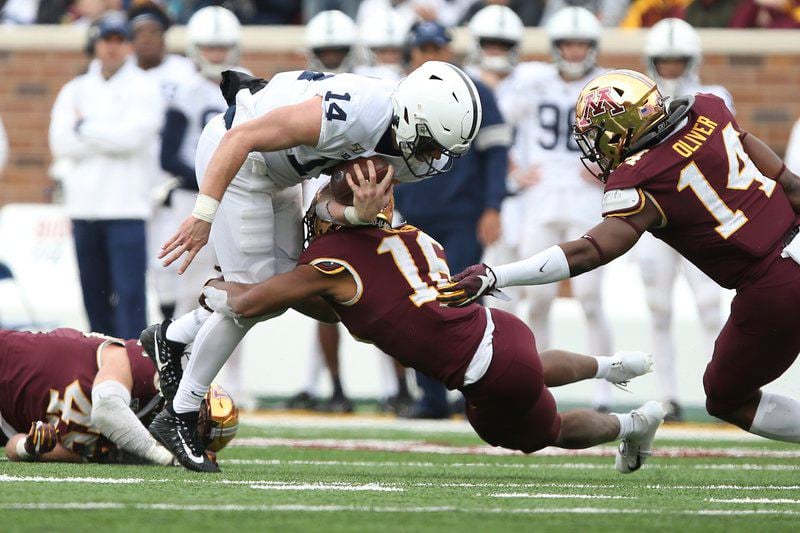 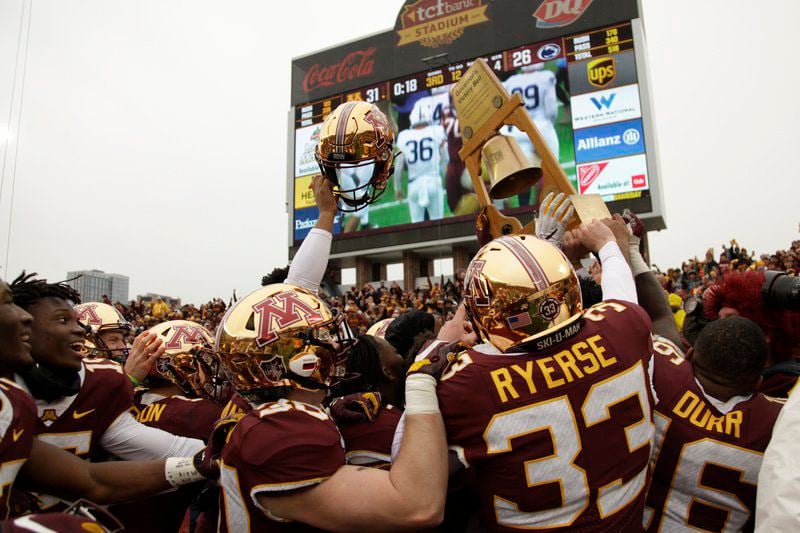 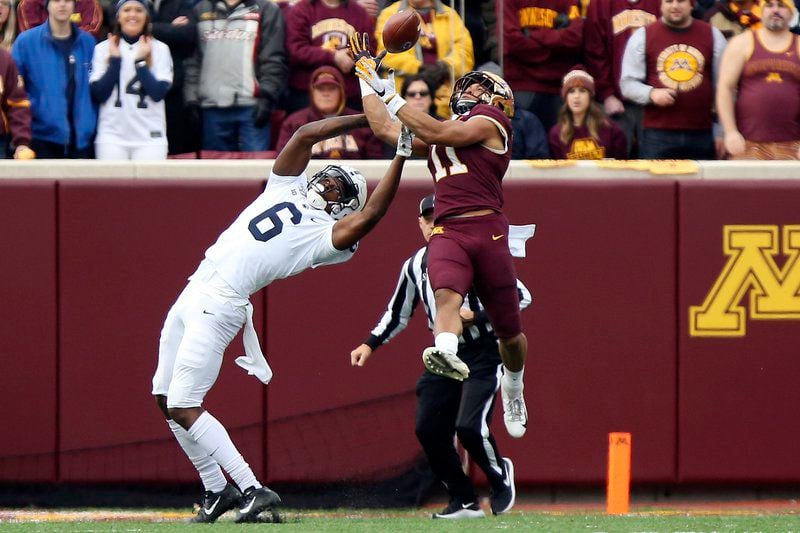 MINNEAPOLIS (AP) — Minnesota's Jordan Howden picked off Sean Clifford's pass in the end zone with 1:01 left, the third interception thrown by Penn State's quarterback, and the 13th-ranked Gophers held on for a 31-26 victory on Saturday afternoon over the fifth-ranked Nittany Lions for their first win over a top-five team in 20 years.

Tanner Morgan passed for 339 yards and three touchdowns to direct a dismantling of Penn State's staunch defense, as Minnesota (9-0, 6-0, No. 17 CFP) not only remained unbeaten but stayed on track for its first trip to the Big Ten championship game.

"I'm just so proud to be a Gopher," said coach P.J. Fleck, who declared the game ball for the entire state in giving it to the school president.

The first sellout crowd for the Gophers at home in four years swarmed the field after the clock ran out, reveling in the biggest step forward yet under Fleck in his third season. The Gophers scrambled the College Football Playoff picture a bit, too, after Penn State (8-1, 5-1, No. 4 CFP) emerged with a top-four spot in the first edition of the rankings.

"We knew they were a good football team," Nittany Lions coach James Franklin said. "It's hard to be undefeated."

Rashod Bateman got the Gophers going with a 66-yard score on their first possession and finished with seven catches for 203 yards, the second-most in program history. Tyler Johnson had seven receptions for 104 yards and a touchdown, too, as Minnesota made enough early gains to hold up during the late rally by Penn State. Morgan went 18 for 20, his second game of the season with a 90% or better completion rate.

"He was reading us very well. He kind of knew what we were in and what they could to do expose us there," linebacker Jan Johnson said. "They hit their plays. He made their throws."

Journey Brown's second rushing touchdown of the game with 3:49 to go cut the lead to five points, and the Gophers promptly went three and out. K.J. Hamler muffed the punt when a teammate backed into him, and though the Nittany Lions recovered, they were pushed back to their 28-yard line.

Clifford, who went 23 for 43 for 340 yards and one score, connected with Jahan Dotson for 49 yards to get Penn State to the 11. Two plays later, however, came the drive killer for Penn State. Daniel George was called for offensive pass interference during an over-the-middle catch by Brown that reached the 2. Clifford, who was off target for most of the day, overthrew George on the next play before the game-sealing pick by Howden. Clifford, who came into the game leading the Big Ten in total offense, had only three interceptions over the first eight games.

Antoine Winfield Jr. had the first two picks in the first half, matching the FBS lead and setting the all-time Minnesota record with seven on the season. Both were inside the 10-yard line.

The Gophers had 321 yards and a 24-13 lead at halftime, already the most points allowed in a game by the Nittany Lions this season, but a fumble near midfield by Shannon Brooks at the end of a run on the first play after a punt sapped some momentum.

Penn State went the other way for a touchdown pass from Clifford to backup tight end Nick Bowers, but Bateman broke open again for a 36-yard gain on the next drive to set up a scoring plunge by Seth Green. The Gophers have touchdowns on all 19 of their goal-to-go possessions this season. Chris Williamson batted down Clifford's fourth-down throw into the end zone on the ensuing drive by Penn State, giving the Gophers another opportunity to drain the clock.

From start to finish, they matched the moment in the biggest game of their careers.

"As an athlete and just in life," Morgan said, "you should want pressure because that means your life is significant."

Penn State: Seeking their first berth in the College Football Playoff, the Nittany Lions watched a defense that had allowed the second-fewest points in the FBS entering the game take a step back against a group of Gophers receivers that was the best they'd faced all year.

Minnesota: Ending a 13-game losing streak to ranked opponents and beating a top-five team for the first time since a win at No. 2 Penn State in 1999, the Gophers produced a potentially program-changing victory that has been missing for so many decades. They have a two-game lead in the West Division with three to go.

Penn State could fall behind Minnesota, which will certainly climb into the top 10 when the next rankings come out on Sunday. The loss will also hurt the Nittany Lions in the CFP pecking order, with the Gophers getting a boost but still with a long way to go to be in the mix.

Penn State: Hosts Indiana next Saturday. The Nittany Lions have a 21-1 record against the Hoosiers, with the only loss on the road 2013.

Minnesota: Plays at Iowa next Saturday. The Gophers have lost four straight games against the Hawkeyes.