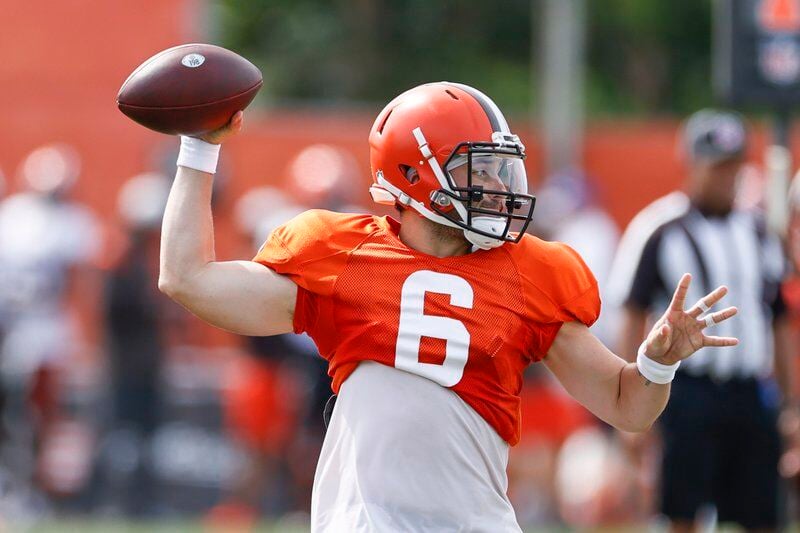 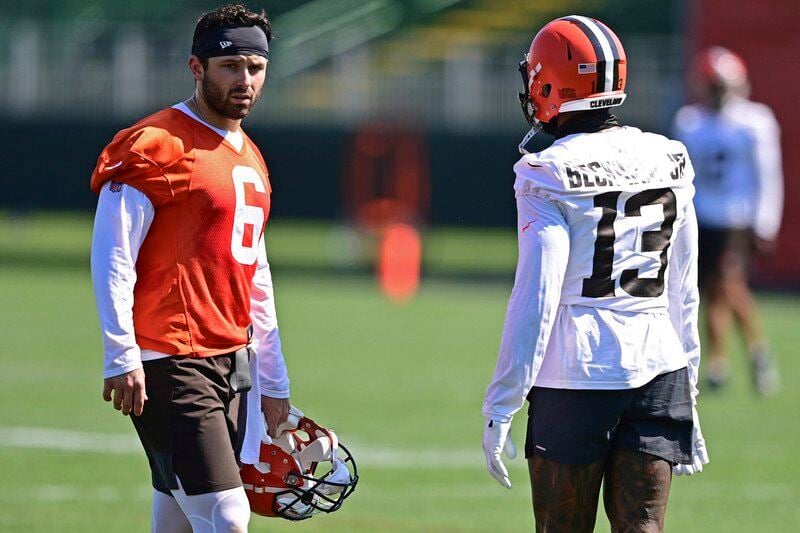 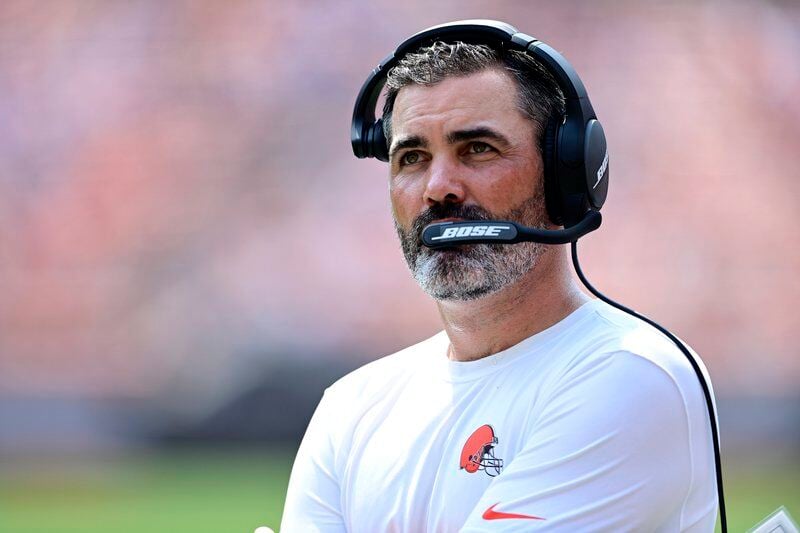 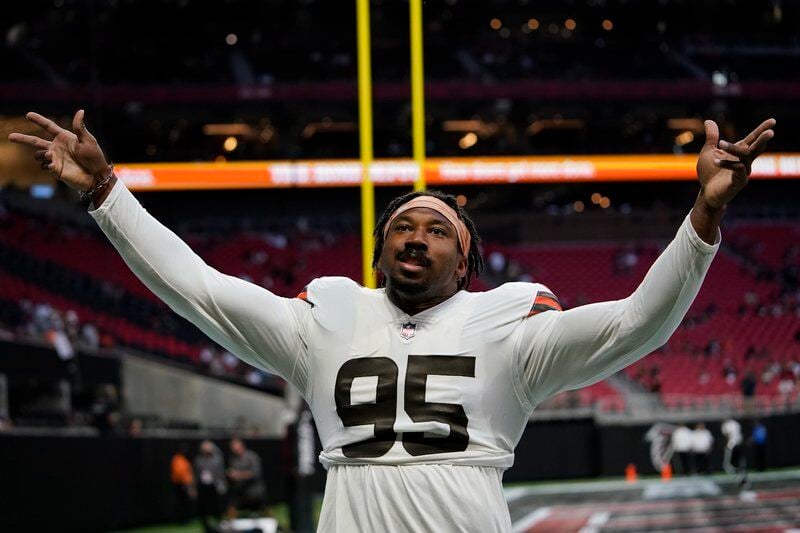 Cleveland Browns defensive end Myles Garrett (95) speaks to fans before the first half of a preseason NFL football game between the Atlanta Falcons and the Cleveland Browns, Sunday, Aug. 29, 2021, in Atlanta. 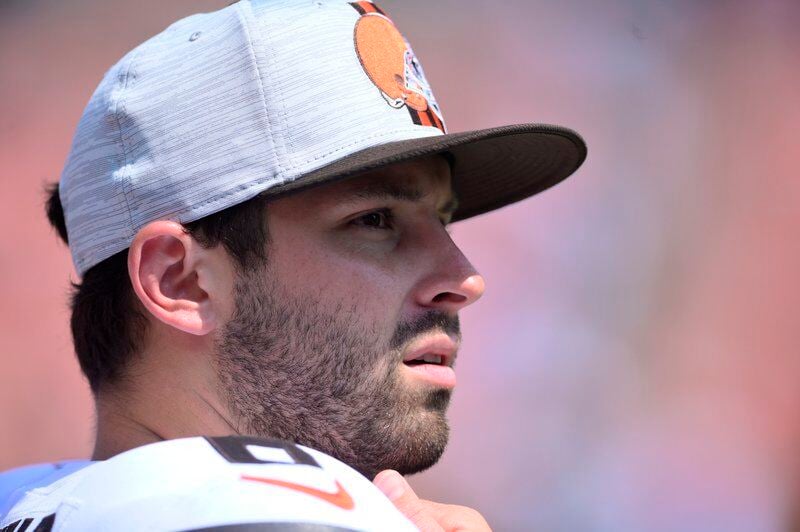 Cleveland Browns quarterback Baker Mayfield watches during the second half of an NFL preseason football game against the New York Giants, Sunday, Aug. 22, 2021, in Cleveland.

Cleveland Browns defensive end Myles Garrett (95) speaks to fans before the first half of a preseason NFL football game between the Atlanta Falcons and the Cleveland Browns, Sunday, Aug. 29, 2021, in Atlanta.

Cleveland Browns quarterback Baker Mayfield watches during the second half of an NFL preseason football game against the New York Giants, Sunday, Aug. 22, 2021, in Cleveland.

The next step will be tougher.

Passed over during Cleveland's search in 2019, Stefanski gave the Browns a second chance to hire him and, well, the rest is history.

Working in harmony with general manager Andrew Berry, who returned to the organization in 2020, Stefanski guided a team with several of the league's rising stars through an unprecedented season of obstacles and to the Browns' first playoff win since 1989.

He has brought the Browns sanity and stability, two things in short supply in Cleveland for much of the past two decades.

Also along the way, the 39-year-old coach formed a strong bond with quarterback Baker Mayfield, who has grown into a leader while quieting the doubters who wondered about his long-term viability.

With a franchise QB, coach and front office, the Browns are legitimate at last, and the Super Bowl talk is warranted.

Cleveland's rise, however, has also spawned huge expectations for a team that collapsed under the weight of preseason hype two years ago.

But Mayfield, who took off following the bye week last season by throwing 14 TD passes and just two interceptions in his last 10 games, believes those tough lessons of the past will serve the Browns well when adversity arises in 2021.

“Because we’ve been punched in the mouth quite a bit, I think our guys will know how to handle that,” he said. "It has to be reiterated every time, we still have to go out there and play with complete confidence and know it’s just not going to happen. It’s a tricky line to walk.”

The Chubb-Hunt 1-2 punch is unlike any in the league and it serves as Stefanski's bread and butter to set up play-action passes for Mayfield.

The Browns showed they belonged among the AFC's elite last season by going on the road to beat Pittsburgh in the wild-card round — ending a 17-game losing streak at Heinz Field — before losing 22-17 to two-time defending conference champion Kansas City in a game Cleveland let slip away.

This time, they intend to finish the job.

One of All-Pro defensive end Myles Garrett's personal goals is NFL Defensive Player of the Year. He was on track to maybe winning the award last season when he contracted COVID-19.

The virus flattened the 6-foot-4, 275-pound specimen, who required breathing treatments over the final weeks. After getting 9 1/2 sacks in his first nine games, Garrett only recorded 2 1/2 over his last seven.

As long as he stays healthy, Clowney should help Garrett. Clowney can play opposite Garrett or slide inside and next to him, creating a pick-your-poison matchup issue for offenses to scheme against.

Beckham returned quicker than expected from a season-ending knee injury, and will likely be on the field in Week 1 against the Chiefs. Beckham missed out on Cleveland's playoff run a year ago, and because he is who he is, there's been endless speculation about his future with the Browns.

It's undeniable that he gives Stefanski — and Mayfield — a weapon capable of stretching any defense. What remains to be seen is whether he can handle a supporting role on a team loaded with playmakers.

The Browns have never won the AFC North. This could be their year.

They ended their playoff drought dating to the 2002 season last year and won a playoff game for the first time since 1994. Next up is their first division title since 1989, when they played in the AFC Central along with the Houston Oilers.

“That's the easiest way to get in the playoffs, win your division,” said left guard Joel Bitonio, who was on Cleveland teams that went 4-44 from 2015-17. “That's always a goal.”

Season-ending injuries to safety Grant Delpit (Achilles tendon) and cornerback Greedy Williams (shoulder nerve) in 2020 had a troubling trickle-down effect as the Browns were constantly moving players around.

Delpit and Williams have again been slowed by injuries this summer, and cornerback Denzel Ward and safety Ronnie Harrison missed time.

Nickel back Troy Hill, who played with Johnson in Los Angeles, gives the Browns some insurance, but the group's overall health could give Stefanski and Berry some sleepless nights.

The Browns will start 2021 in the same place 2020 ended: Arrowhead Stadium. The league's schedule makers matched up the Browns and Chiefs in Week 1.

“Hell, yeah,” Browns wide receiver Rashard Higgins said when asked if that was a good thing.

It was Higgins' costly fumble at the goal line that proved to be pivotal in Kansas City's comeback win.

“It’s a vindictive vibe,” Johnson said. “We definitely want to get back at those guys.”