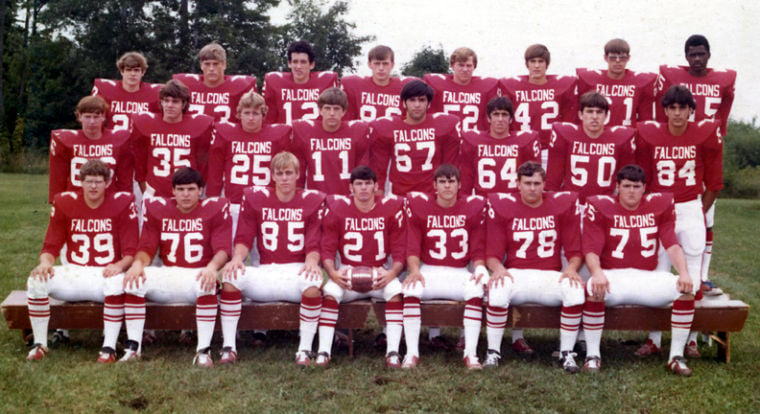 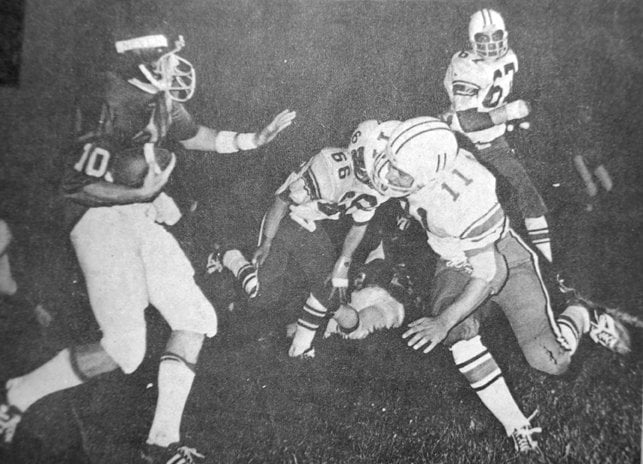 From the time he started playing football in the backyards near his home in Rock Creek, John Workman was putting it all on the line. It never changed.

Workman was the second of three children of Ann and Harry Workman. His brother, Jeff, graduated from Jefferson in 1975 and his sister, Rosemary, was a 1983 Jefferson graduate. Their father is deceased, while their mother lives in Jefferson.

“We lived in East Trumbull, about three or four miles west of Rock Creek,” Workman said.

Most of his early opponents were his fellow students at Rock Creek Elementary School. Even then, Workman’s football path seemed set.

“I played with all the kids from Rock Creek,” he said. “I was usually a lineman or a receiver, but we took turns playing a lot of positions.”

When he got to the seventh grade at Jefferson Junior High, Workman joined forces with a lot of the players who would mold the Falcons into a winning outfit such as running backs Randy Park and Jim Baker, quarterback Mark Neenan, ends Brad Reinke, Gary Tyus and Charles E. Wilson and center Pat Howley. They hit it right off for coach Bob Ashba, who followed them up the line through seventh, eighth and ninth grades. By their freshman year, they had produced a 6-1 record.

“They started me off at end and usually ended up moving me in to guard,” he said. “They played me at middle guard and outside linebacker on defense.

“Those were pretty good teams. It was a good group of guys who were awesome players. Coach Ashba was kind of a practical joker, but he definitely taught us the fundamentals and had a way of getting the most out of us.”

Park, an Ashtabula County Football Hall of Famer, remembered a show of strength Workman put on even then.

“When we were freshmen, Bob Ashba had a device that he called a hooker, which was a (tackling) dummy that would drop down on springs and you could hit and they’d reset it,” he said. “Every time John hit it, they never had to reset it because he’d do it himself.”

So the Falcon coaching staff knew they had something special coming when Workman and the rest of the sophomore class arrived at the varsity level in 1974.

“They were our super sophomores,” Jim Richards, an assistant coach then, said. “We saw what they could do. We knew they were winners.”

Even though he was new to the scene, head coach Glenn Sutherin knew he had a bankable commodity, too. The Falcons quickly realized the grizzled veteran was determined to get the most out of them he could.

“He reminded me of God,” Workman said. “I’d watched a lot of Ohio State games and thought he was a lot like Woody Hayes.

“(Sutherin) broke you down, then built you back up. He had us conditioned like I’d never been before. He had a way of getting the most out of guys, a lot of times more than they thought they could give.”

In fact, that 1974 season, Sutherin made believers of the Falcons. He guided them to a 4-5-1 record and, more importantly, a share of the Grand River Conference title with Perry, the first a Jefferson team had won since 1954. It was done with a mixture of those super sophomores and veterans like guard Dennis Mead, center Lloyd Ashley, linebacker Tom Smith and defensive back Steve Spang.

“It was awesome,” Workman said. “I remember beating Ledgemont for the title. We beat PV that year, too. I felt so good because I felt I had done my job.”

Workman played both ways, starting at end offensively and tackle and middle guard defensively. He didn’t play favorites, either.

“I loved them both,” he said. “I actually probably liked defense better because I could hit people.”

It was the beginning of a great era in Jefferson football, one in which the Falcons improved to 6-3-1 in 1975 for the school’s best record in 20 years, then went a step farther in 1976 by finishing 9-1, still the best single season in school history. But neither record produced a championship, despite great honors for Workman and several of his classmates.

In fact, the Falcon seniors of 1976 went the extra mile to make it special.

“We wanted to go out in a big way,” Workman said. “We got together earlier to try and get prepared.

Sutherin tried all he could to make it happen, too.

“He told us, ‘My God, son, you have everything in your hands. It’s there for the taking,’” Workman recalled. “He used to pound the desk and papers would fly everywhere. I can’t tell you how many clipboards he went through that season. Nobody liked Saturday film sessions.”

“Glenn told us it could be the most important year in Jefferson football history,” Baker, who played fullback, said.

Unfortunately, 9-1 still wasn’t enough. A 35-0 loss in the sixth game to a Fairport team led by quarterback and future Ohio State and Miami Dolphins punter Tom Orosz foiled the efforts for a GRC title. Not even a 20-0 victory over Edgewood in the finale for Jefferson’s first possession of the Edward Hoadley Cup in almost two decades could completely compensate.

“It’s a hollow feeling when you’ve worked so hard all year for something like that and it doesn’t work out,” Workman said. “But Fairport outplayed us. It was tough to get field position with (Orosz’s) punting. But losing is losing, no matter who it’s to.

“I had a great year, but that was a hard pill to swallow. In the end, it wasn’t what we hoped for. Beating Edgewood was nice, especially after we’d been so close the year before, but losing to Fairport still hurt.”

“I’d trade going 9-1 and beating Edgewood that year for a win over Fairport, especially since it was at their house,” he said.

The passing years have made that 9-1 season a little more a source of pride to Workman, especially since it hasn’t been topped.

“I do feel proud to have been a part of history,” he said.

College football beckoned Workman, and he answered briefly, but it didn’t last long.

“I had a chance at Mount Union, and Coach Sutherin got me to Youngstown State, but I wasn’t too much into it, so I went into the Marines,” he said.

All of much marked the end of his playing career.

Mary Ellen (Duva) Frary, 75, passed September 8, 2021. The loving mom of Jacqueline (Bill) Taggart and Ryan Ginn; sister of Richard, Mark and Michael. Proud grandmother of 4; great-grandmother of 5. No services will be held. www.czupfuneral.com