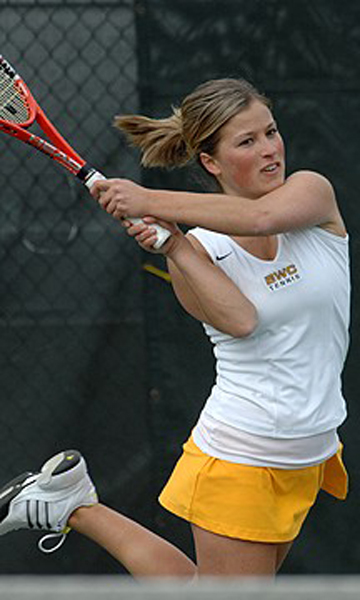 ANDREA ESSIG, a former star player at Edgewood, has high hopes for this, her senior season at Baldwin-Wallace College. 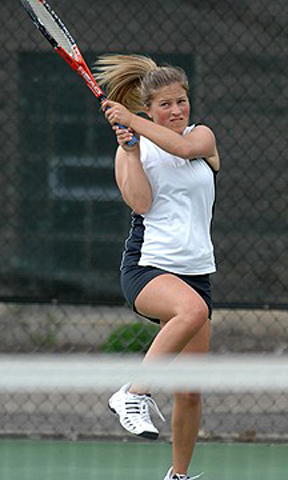 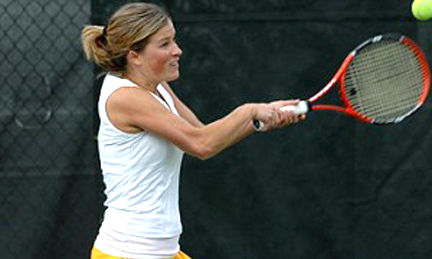 ANDREA ESSIG, a former star player at Edgewood, has high hopes for this, her senior season at Baldwin-Wallace College.

BEREA — Winning a pair of Ohio Athletic Conference titles and earning two NCAA Division III National Tournament berths has been exciting for Baldwin-Wallace College senior women’s tennis student-athlete and co-captain Andrea Essig. And, leading her team to a third crown and berth in the national tourney would be the perfect ending to a fine career.

To date, Essig and the Yellow Jackets have compiled a 4-7 overall and 1-0 Ohio Athletic Conference mark against the toughest pre-season competition in the program’s history.

“I think we have a great chance to win the conference this year,” said Essig with enthusiasm and prior to a match this today at home against Cleveland crosstown rival Case Western Reserve University on the “Pop” Collins Courts in Berea at 3:30 p.m. “We are a strong team with a lot of depth in the line-up. Our biggest competition in the OAC will probably be Otterbein College, but there are a few other teams that may give us a run for our money.”

However, simply relying on the odds is not enough for Essig. “I believe if we work hard as a team all season we’ll be at the top of the conference and hopefully on our way to the national tournament as well!”

Since Essig joined the Yellow Jacket program in 2006, she has been a vital part of the team’s many successes. She has helped B-W to assemble an overall 54-24 record, including a school-record 25 victories three seasons ago.

She also has compiled a number of successes individually.

As a freshman in 2006-07, Essig split her time between the fifth and sixth singles positions. It was during this season she earned her first letter and fashioned a 14-14 overall record. She also made a few appearances in third doubles and achieved a 4-5 mark. Her efforts helped the Yellow Jackets compile a school-record 25-3 record, including a 9-0 OAC mark and the OAC regular season title, the OAC Tournament crown and the school’s first-ever NCAA Division III Tournament. At the NCAA tourney, B-W beat Albion College of Michigan for the conference’s first-ever win at the national level.

“Andrea was a big part of our success as a freshman,” veteran coach Jack Bethlenfalvy, who owns a school-record 282 career wins and is the winningest women’s tennis coach in both OAC and Ohio collegiate annals, said. “(Her development) all began her first season and she’s just gotten better and better every year.”

As a sophomore in 2007-08, Essig started as a third doubles partner with current junior Katy Marshall (Medina/ Senior) and the duo combined for a 12-8 mark as a combo. Overall, Essig compiled a 15-10 total doubles mark. In singles play, she saw limited action at No. 6 and had a 3-4 overall mark. Again, Essig and B-W had a fine season with an 18-7 overall record, won the OAC regular season title with another 9-0 slate, captured the OAC tourney championship and advance to the NCAA Division III National Tournament where they lost at No. 2-seed and Div. III power DePauw (Ind.) University.

“From the top to the bottom of our lineup in 2007-08, we might have had our strongest team,” said Bethlenfalvy, but also making sure to note that it’s tough to beat the 25-3 team of a year before. “We added (juniors) Caitlyn (Pecinovsky,Whitehall/ Bishop Hartley) and Emily (Pelosi, Uniontown/ Green) which moved Andrea strictly to doubles. She responded by having another good season.”

As a junior, Essig returned to singles play and responded by earning the No. 3 position and posted a 10-17 overall mark, including a solid 5-3 slate against OAC foes, and teamed with Pelosi at third doubles to compile an 6-2 mark in OAC play. For her efforts, she was awarded honorable mention All-OAC honors.

“I think last season really gave Andrea the confidence that she can play at a high level at a high singles position and be a leader on the team,” Bethlenfalvy said.

Essig is currently into her fourth season and is a starting player at fifth singles and has a 4-10 overall mark and joins Marshall at third doubles for a 5-9 mark. One of Essig’s main attributes as a team leader is her positive attitude.

“The great thing about playing doubles with Andi is that no matter what (is happening in our match), she always says, ‘that’s OK, head up, let’s keep going,’” Marshall said. “She always finds a way to stay positive when we are on the court together.”

“Andi is one of the toughest competitors that I know,” Pecinovsky, who plays first singles and first doubles, said. “She never gives up, and she never lets her team give up, either.

“(Opponents) may walk out onto the court to play her, and not get that instant intimidation factor, but as soon as she rips a return back at you, well, you’ll start thinking otherwise. Mark Twain once said, ‘Its not the size of the dog in the fight, it’s the size of the fight in the dog.’ Although she’s small, Andi definitely has a lot of fight in her. I really admire her passion for the sport, and I’m so glad I’ve been able to compete with her on my side for the past three years.”

The dedication and hard work Essig displays on the court, she also applies off the court. Her work in academics has placed her on the dean’s list for the past three consecutive semesters. She also is an active member on campus through various public relations events, including working for the Cleveland Rape Crisis Center, “Go Green!”, and “Aluminum Cans for Burned Children”. She also is an active member of Greek life as a member of the Delta Zeta Sorority.

“Andrea is a role model for our younger players as a leader, good student and being involved on campus,” Bethlenfalvy said. “She has really, really been involved and we are very proud of her efforts. At a Division III school like B-W, the focus is on education and being well-rounded as a student and leader. Andrea has taken full advantage of her opportunities, and to her credit has done very, very well.”

Later this spring, she will graduate with a dual major in public relations and sport management. She has an open mind and a positive outlook for her future.

“My future plans are unknown at this time,” Essig said. “I am keeping my eyes open for job opportunities and hoping that something comes up in the near future. I would like to stay in the Cleveland area, at least for now, but the future is unpredictable.”

Former team captain and tennis team alum Alyssa Trampert ’09 says of Essig, “Over the past three years that I’ve known Andi, she’s developed into a player that is not only a supportive teammate on the court, but also a supportive friend off the court. She understands the responsibilities required to be a captain and is a good example to all of the girls.”

Following the match versus CWRU, Essig and the Yellow Jackets continue their busy schedule with a rescheduled match versus NAIA foe Walsh University on Friday at B-W and an OAC match Saturday at Capital University in Columbus.

“One of our goals is to compile the best possible overall record that we can, but the three main goals are to go undefeated during the OAC regular season, win the OAC Tournament title and advance back to the NCAA Tournament,” Essig said. “I am really excited about the challenge of a third title and NCAA berth. It is a driving force with the entire team.”

Pelosi, a junior, works in the sports information department and plays tennis at Baldwin-Wallace College.