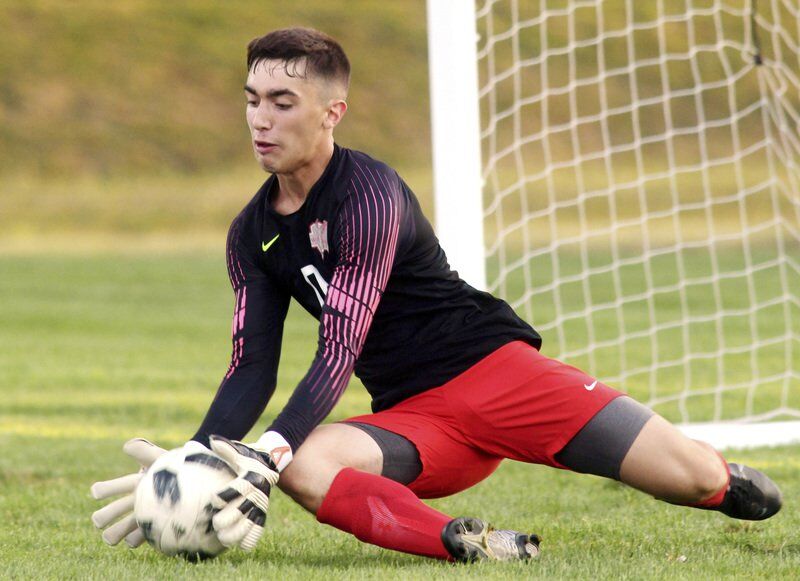 Edgewood goalie Ty Vencill makes a save during first-half action vs. Geneva recently at Corlew Field in Ashtabula Township. The Warriors played Grand Valley to a 1-1 tie on Tuesday night. 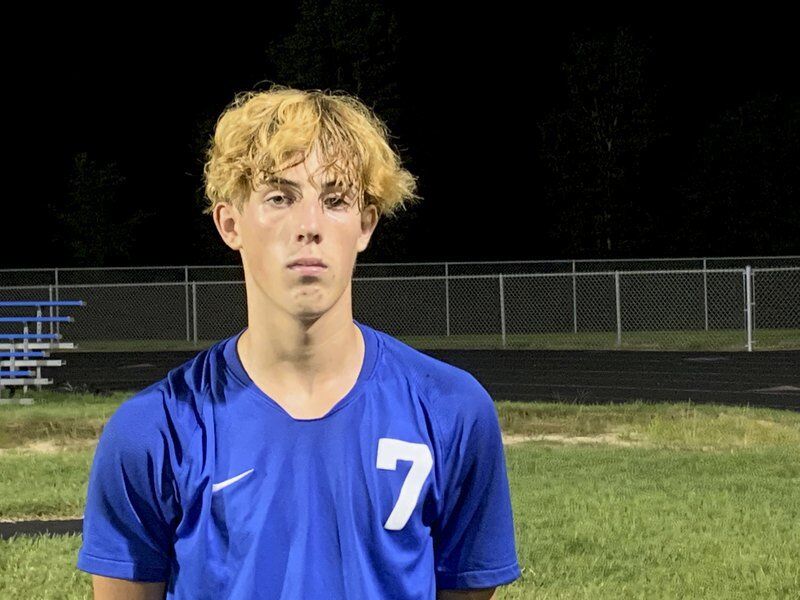 Grand Valley's Jordan Briggs scored the lone for his team in a 1-1 tie vs. Edgewood at GV High School on Tuesday night.

Edgewood goalie Ty Vencill makes a save during first-half action vs. Geneva recently at Corlew Field in Ashtabula Township. The Warriors played Grand Valley to a 1-1 tie on Tuesday night.

Grand Valley's Jordan Briggs scored the lone for his team in a 1-1 tie vs. Edgewood at GV High School on Tuesday night.

ORWELL — Entering Tuesday night, Grand Valley had not allowed a goal this season.

That changed with 12:30 left in the first half when Edgewood pushed one in the net.

In the second half, the Mustangs scored to tie the game at 1-1.

That’s the way it ended on Tuesday night in a county boys soccer clash.

The Warriors scored when Mustangs goalie Andrew Verhas made a diving save on a shot on goal during a deep attack into the box by the Edgewood.

The ball ricocheted off his hands and directly to junior Patrick Pierce-Ruhland, who kicked it past the recovering keeper.

Prior to the Edgewood goal, GV had outscored its opponents 19-0 through three games this season.

“I thought they handled [giving up a goal] well,” Mustangs coach Rick Huffman said. “We actually talked about that before the game. At some point, you’re going to give one up, and how you handle that is gonna be telling.”

Following the goal, Edgewood (4-2-1) controlled the game for the final 10 minutes of the half.

Their sweepers ended GV’s attacks before the Mustangs could setup shots on goal. Sophomore goalie Ty Vencill stopped any occasional shots that came his way in the final minutes, allowing Edgewood to take a 1-0 lead into halftime.

“It seems like we always start off slow,” Edgewood coach Rick Carlson said. “For the first 8-10 minutes we’re just trying to work our way into the game a little bit. Then once we settle down and play our game … we seem to pick it up a bit more.”

Vencill’s stops earlier in the half helped quell any GV (3-0-1) attacks. He recorded 15 saves in the first half.

“He’s a beast,” Carlson said of Vencill. “He was CVC Player of the Week last week. Ty wears his heart on his sleeve a lot of times. Sometimes he has to let those bad ones go, but he’s really made a lot of progress. It’s nice having him as a sophomore, and at least I know I have him for the next two years. More than anything he’s a great kid.”

However, Huffman rallied his team at the half.

“The first half is nothing close to what we are, Geneva can attest to that,” he said. “We pretty much just play 80 minutes of full aggressiveness, good technical soccer, but we’re gonna press. We just came out flat [in the first half].”

It took the less than a minute to tie the game at 1-1 on a nice find from junior Kyle Benson to sophomore Jordan Briggs inside the box.

“The goalie [Vencill] called it out, their defense backed up, and I got an easy one touch in the net,” Briggs said.

GV attacked Edgewood in the final minutes of the game, regularly getting shots on goal.

However, they couldn’t finish. Vencill finished with 24 saves, as the Warriors defense and some self-inflicted mistakes ended the Mustangs late push.

“The second half I just wanted to establish our presence and show them what our Grand Valley soccer is about,” Huffman said. “I think you saw that. We just ran out of time.”

“There’s a couple games we have on our calendar, every game is important obviously, we don’t want to look past another one,” Huffman said. “But we know we have them again, and we know we didn’t finish business [tonight]. So we’ll be ready for them at the end of the season.”