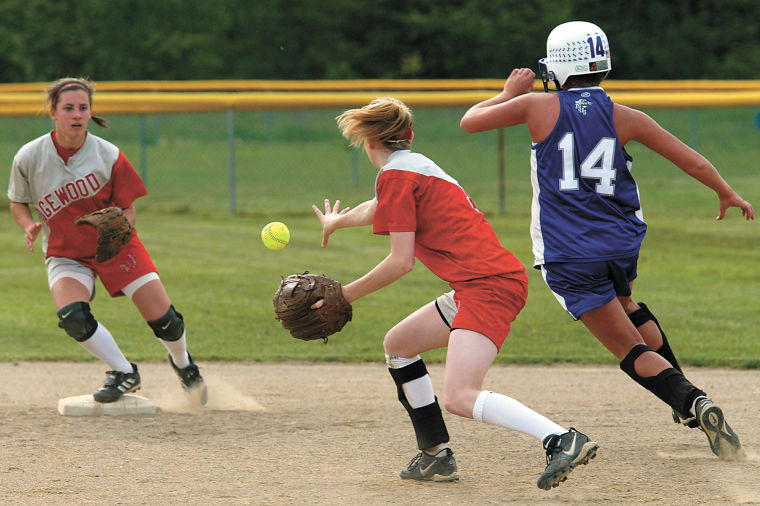 EDGEWOOD'S KATIE McMellen (center) flips to Trisha Dreslinski (left) to record an out as Poland's Amanda Crittings (14) tries to break up the play during the district final between Poland and Edgewood at Jags Complex Wednesday. 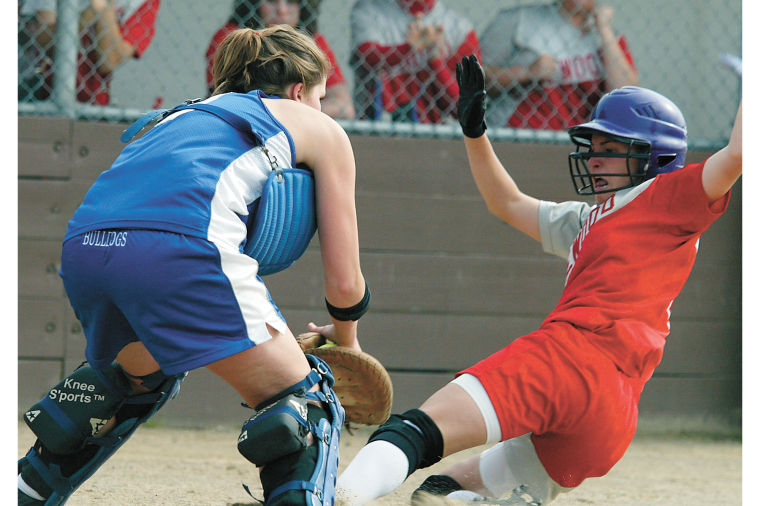 EDGEWOOD'S TRISHA Dreslinski is out at the plate as Poland catcher Julia Johnston applies the tag during the district final between Poland and Edgewood at Jags Complex Wednesday.

EDGEWOOD'S KATIE McMellen (center) flips to Trisha Dreslinski (left) to record an out as Poland's Amanda Crittings (14) tries to break up the play during the district final between Poland and Edgewood at Jags Complex Wednesday.

EDGEWOOD'S TRISHA Dreslinski is out at the plate as Poland catcher Julia Johnston applies the tag during the district final between Poland and Edgewood at Jags Complex Wednesday.

By BOB ETTINGER For the Star Beacon JEFFERSON - Edgewood right fielder Jackie Baird stepped to the plate in the seventh inning in a tie game with Trisha Dreslinski on second just wanting to put the ball in play. She not only put the ball in play, she placed it perfectly allowing Dreslinski to score and give the Warriors a district championship win, 3-2, over Poland Wednesday at the Jefferson Area Girls Softball Complex. "I was thinking I just needed to put the ball in play," Baird said. "If I wasn't going to get a solid hit, I wanted to hit a fly ball to right field to move Trisha." "It took a couple seconds after I scored to realize we were district champions," Dreslinski said. "Words can't explain (how I feel)." The Warriors (23-3) will play Notre Dame-Cathedral Latin in the regional semifinal today at Firestone Stadium in Akron at 5 p.m. Dreslinski drew a leadoff walk in the home half of the seventh and moved to second on a passed ball. "We're always looking to move the runners," Dreslinski said. "A passed ball is like getting free bases. I was anxious to move. I wanted to score." "That was really big," Poland coach Reid Lamport said. "Then they got a little break with the passed ball." "I thought, we have a shot," Edgewood coach Shelley Monas said. "All we needed then was a hit. Trish has nice speed on the bases and she runs the bases well." Following Jill Moga's popout to the first baseman, Baird looped an 0-1 pitch over third base that created a cloud of chalk when it hit the line. The throw to the plate was off line and Dreslinski scored standing up. "After the popout, we were hoping to get another out, then even if the runner moves up to third, we still have a chance to get out of the inning." Lamport said. "(Baird) hit it right on the line and nobody was going to stop Dreslinski from coming home. She was running at the crack of the bat." "I was sending (Trisha) all the way," Monas said. "That (hit) was well-placed. (Kari Thompson's) a good athlete out there. She came up firing." Poland pitcher Liz Maher had tied the game at 2-2 with a leadoff home run in the top of the seventh. A leadoff homer in the top of the fourth by Thompson had given the Bulldogs (21-4) a 1-0 advantage. "It would have been nice if someone were on," Lamport said. "I'm surprised we didn't put a few more hits together. I guess it would have been better to have four singles instead of the two home runs." Consecutive singles from Katie McMellen, Alexi Cash and Dreslinski led to a pair of Edgewood runs in the fourth. "We bunched our hits together," Monas said. "That was very much a key." McMellen slapped an infield single to lead off, and Cash followed with a single through the right side. Dreslinski followed with a single to center that scored McMellen from second. Moga grounded back to the mound to move the runners up and Baird grounded to short to score Cash. Dreslinski was thrown out trying to score on the play. Megan Dragon struck out six and scattered five hits to improve to 15-1 on the season. "Dragon threw a real nice game," Lamport said. "Megan always keeps us in games," Monas said. "The key was she scattered those hits. She kept us in the game. She's pretty good for a freshman." Ettinger is a freelance writer from Ashtabula.