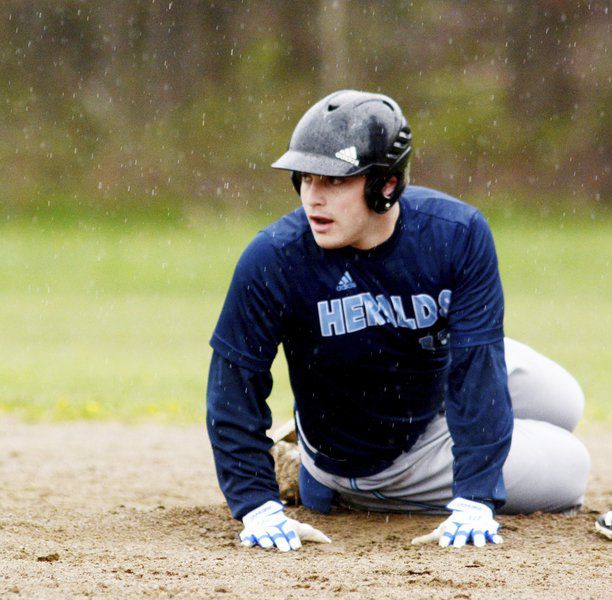 St. John’s Jon Timonere arrives safely at second base during a non-conference baseball game in the 2019 season at Pymatuning Valley. Timonere is scheduled to play football and baseball at Hiram College. 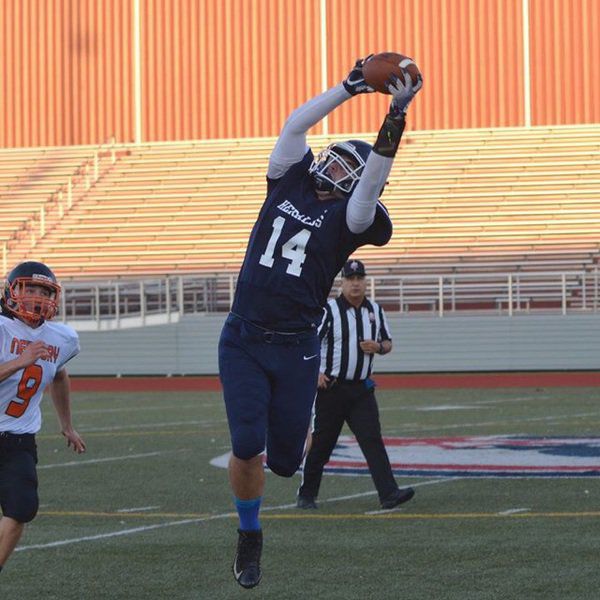 St. John’s Jon Timonere stretches for a catch against Newbury in the 2018 season. Timonere is scheduled to play football and baseball at Hiram College this upcoming school year.

St. John’s Jon Timonere arrives safely at second base during a non-conference baseball game in the 2019 season at Pymatuning Valley. Timonere is scheduled to play football and baseball at Hiram College.

St. John’s Jon Timonere stretches for a catch against Newbury in the 2018 season. Timonere is scheduled to play football and baseball at Hiram College this upcoming school year.

SAYBROOK TOWNSHIP — Jon Timonere may have been only a day away from heading off to college, but rather than living up his final 24 hours at home, the 2019 graduate was hanging out at a familiar place — the St. John practice field.

If anyone could appreciate what the numerically challenged Heralds will be going through this season, it would be Timonere.

“These kids have been working hard all summer,” he said of the small group of players working on quick passing drills. “They deserve a chance to play.”

He worked hard all four years at St. John, playing football, basketball and baseball, while excelling in the classroom.

That work has paid off as he now has the chance to play football this fall and baseball in the spring for Hiram College.

“I really liked the school,” he said of liberal arts college in Portage County. “It’s a family atmosphere, just like here.”

Student-athletes playing two sports in college is not something you do not hear about everyday.

Then again, neither is someone from a small school like St. John getting an opportunity at the next level.

door down with offers

Instead, Timonere had to put in the work himself, writing letters and emailing videos of himself on the field to college coaches, in hopes that someone would take notice.

“It’s hard, especially being out here in Ashtabula County, to get recruited without working to get your name out there,” Timonere said. “I reached out to the football and baseball coaches there. I also talked to my coaches here about if they thought it was realistic that I could play in college.”

Now that he’s made the commitment, his high school coach believes his work ethic and dedication is

what will make him successful.

“He did everything we asked him to,” Knisely said. “He played multiple positions, never complained, never missed a workout. He wanted more than anyone for this program to be successful.

“I pushed for him

to play two sports. I

did two sports in college and I think it will help him stay focused. His commitment is what will make him successful. He’s going to have a great college career and I can’t wait to go see him play.”

Timonere can’t wait, either, simply, because of the passion he has to be out on the playing field.

“That’s really what it is for me,” he said. “I just love football and I didn’t want to be done with football or baseball. I could not have gotten anywhere without coach Knisely, as well as (Heralds basketball) coach (Curtis) Turner and (baseball) coach (Steve) Urchek, as well as the assistant coaches. They really got me through a lot, they pushed me to be the best player and best student I could be.”

He said he’s not decided on a major area of study, but leaning towards a degree in business or psychology.