The Latest: Biden to get COVID booster after authorization 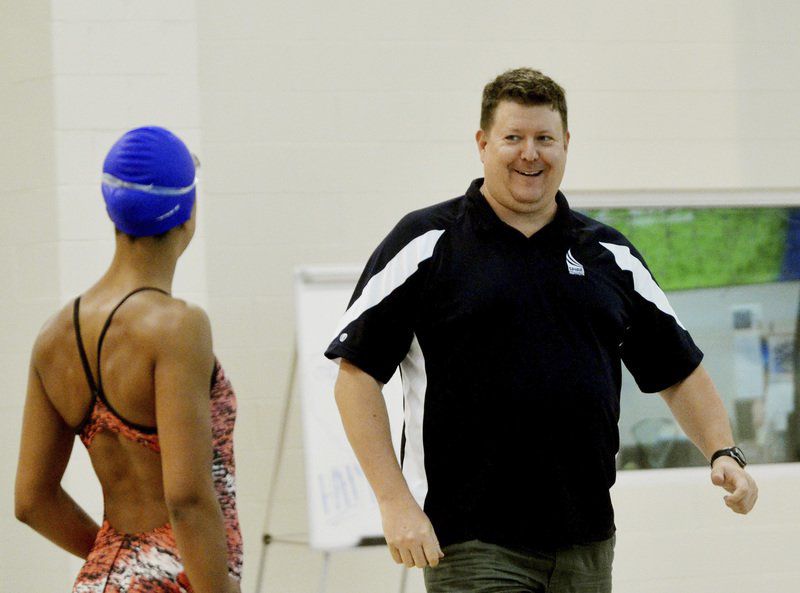 Thad Schultz, SPIRE aquatics director and swim coach, prepares to start practice with Naomy Grand'Pierre and other Olympian swimmers on Friday at the SPIRE Institute in Harpersfield Township. 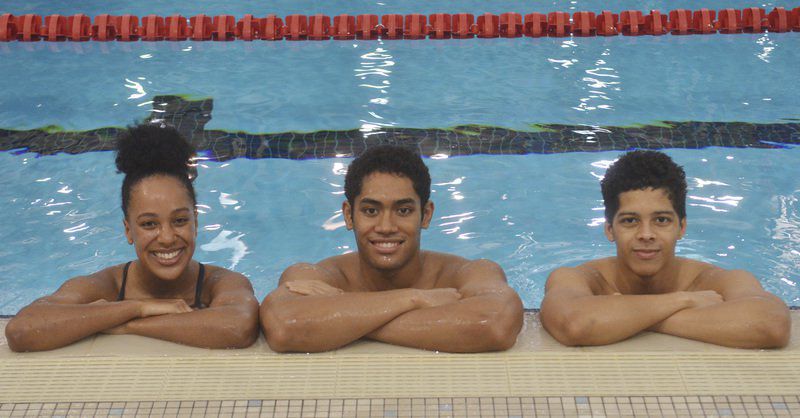 Olympian swimmers (from left) Naomy Grand’Pierre of Haiti, Meli Malani of Fiji and Hannibal Gaskin of Guyana have been training at Spire Institute in Harpersfield Township and will soon be leaving for Brazil to compete in the 2016 Summer Olympic Games next month. 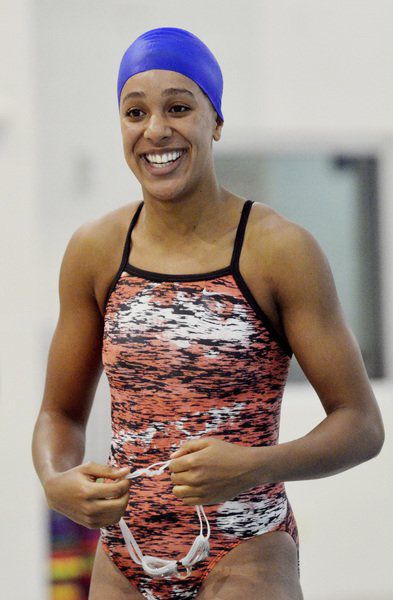 Naomy Grand’Pierre trains at the SPIRE Institute in Harpersfield Township. Grand’Pierre will represent Haiti in the 2016 Olympic Games in Rio de Janeiro, which begin Aug. 5.

Meli Malani of Fiji will be helding to the Olympics in Rio de Janeiro after training at the SPIRE Institute in Harpersfield Township.

Thad Schultz, SPIRE aquatics director and swim coach, prepares to start practice with Naomy Grand'Pierre and other Olympian swimmers on Friday at the SPIRE Institute in Harpersfield Township.

Olympian swimmers (from left) Naomy Grand’Pierre of Haiti, Meli Malani of Fiji and Hannibal Gaskin of Guyana have been training at Spire Institute in Harpersfield Township and will soon be leaving for Brazil to compete in the 2016 Summer Olympic Games next month.

Naomy Grand’Pierre trains at the SPIRE Institute in Harpersfield Township. Grand’Pierre will represent Haiti in the 2016 Olympic Games in Rio de Janeiro, which begin Aug. 5.

Meli Malani of Fiji will be helding to the Olympics in Rio de Janeiro after training at the SPIRE Institute in Harpersfield Township.

HARPERSFIELD — Naomy Grand’Pierre will make history when she travels to Rio de Janeiro to compete at the 2016 Summer Olympic Games.

Born in Montreal and raised in Atlanta, Grand’Pierre will become the first Haitian female swimmer to represent her country at the Olympic Games. A dual citizen of both the United States and Haiti (her parents’ country of birth), the University of Chicago swimmer decided last fall to approach the Haitian Swimming Federation after discussing the topic with her parents.

Following months of training, she received the official word from FINA, the international governing body for aquatic competition, in early July that she could represent her parents’ home country this summer.

“The most exciting thing that I am going about this whole process is the fact that I’m the first Haitian female swimmer, so it’s a pioneer event in that regard,” Grand’Pierre said. “So, I’m really excited about representing that aspect of Haiti and jump-starting swimming for that country.”

Grand’Pierre is one of four swimmers who have trained at the SPIRE Institute to qualify for the Summer Olympic Games in Rio. Joining her will be Fiji’s Meli Malani, Guyana’s Hannibal Gaskin and Grenada’s Corey Ollivierre.

Malani and Grand’Pierre will compete in the 50-meter freestyle, Gaskin in the 100 butterfly and Ollivierre in the 100 breaststroke.

All four athletes are 19-years old and entering their first Olympic Games, and they don’t seem to miss the significance of their accomplishment.

“I’m pretty excited,” Gaskin said. “I mean, it’s a great opportunity. It’s not an opportunity a lot of people get.”

They got the chance to meet those feats thanks to getting a scholarship from FINA that sent them to an official Olympic training center, and they happened to land in northeastern Ohio.

It’s an opportunity that has paid dividends for each athlete.

In the middle of a two-year scholarship program at the SPIRE Institute, Malani has already experienced two winters in Ashtabula County, and needless to say, he wasn’t quite prepared for them.

Fiji enjoys a tropical marine climate where in the “cool season” the average temperature is 72 degrees Fahrenheit.

That means Malani had never seen snow before outside of movies, and his first experience with snow could have proven costly.

“You see a lot of movies where kids go out and play in the snow and you think, ‘Oh, it must be fun just to go out there and do the same thing,’ but then I guess not because my hands started to go purple,” Malani said. “I tried to build a snowman, and I just ran back in — I couldn’t take it.”

Gaskin understood all too well Malani’s issues with winter. Guyana is a small South American nation west of Venezuela on the coast of the Atlantic Ocean with a tropical climate.

Because of this, it was a little daunting when he arrived in Ashtabula County in December on a seven-month scholarship.

Outside of that experience, though, Gaskin said he has enjoyed his time in Ohio.

“It’s a lot different than where I’m from ‘cause I’m from the Caribbean, and it’s just hot and sunny all year round. It rains, but even when it rains, it’s still hot,” Gaskin said. “I was up here in the winter, and it’s pretty cold with all the snow and everything. It’s like the first time experiencing it, but it’s cool up here.”

The weather couldn’t scare the athletes from getting instruction by Thad Schultz, the director of aquatics at SPIRE.

Prior to taking up the position, Schultz coached at Division I universities Penn State, Ohio State and Clemson, where he helped 48 athletes qualify for the NCAA national championship meet.

Malani had the highest praise for Schultz, describing him as a coach who knows what buttons to push in order to get the best out of his athletes.

He also said Schultz has improved his freestyle technique to help him improve.

“He’s a great coach, and he really motivates you to take swimming to the next level,” Malani said of Schultz. “This is almost a year now with me being with coach Thad, and he’s been a great coach so far. He’s tough on you in training, and he makes training fun at the same time.”

For what it’s worth, Schultz said every athlete entered his care with a very good background, having competed in the sport for years.

There are two things SPIRE could offer the quartet that their home countries couldn’t — the facilities and the knowledge someone like Schultz has.

He explained how while the coaches in many of those small nations are good, they didn’t receive the same education he did in the sport.

“I think that the amount of knowledge that they are now getting has improved greatly from what they got from their home countries,” Schultz said. “Their home countries did a fine job at coaching them and getting into this level that they were. I think we’re just able to help them get over that hump a little bit.”

In terms of training, the swimmers spend 16.5 to 17 hours per week in the pool, and then they put in another four-to-six hours in the weight room.

Added to that is yoga, and all of these things are meant to build more strength and stamina when they hit the pool.

All that work has already shown results, according to Gaskin.

He said he has already noticed a difference in his strength, and while he won’t know whether his stamina has truly improved until he gets to the pool in Rio, he expressed a belief that it has.

Even Grand’Pierre can tell a difference her performances in the short amount of time she’s been at SPIRE.

She arrived in June on a three-month scholarship, and the Maroon swimmer explained how Schultz has changed her stroke even more than her Chicago coach. It has her excited about her potential for next month.

“We’ve worked a lot on my technique and we’ve changed my stroke a little bit,” Grand’Pierre said. “So, I’m definitely feeling a lot stronger from the weight sessions that we’ve been doing, and in terms of my stroke, it feels really good. So, I’m excited going into Rio, and I think I should be able to perform pretty well and go a best time.”

With all the improvements, all four athletes managed to put together the necessary qualifying times or received official word from FINA that they will race in Rio.

Now, the swimmers are beginning to make their way to Brazil.

Ollivierre left the county earlier this week, and the other three will make their way to South America in the next week or so.

It has dawned on the athletes that the pinnacle for most types of sports is right around the corner.

Considering the age of all four at 19, they have felt the nerves associated with competing against some of the best athletes in the world, but just like with the physical aspects, Gaskin explained how he and the other swimmers have received some mental training in hopes of limiting those nerves.

“I’m pretty nervous. I mean, it’s world-class competition,” Gaskin said. “We had a mental trainer here, so we did a lot of talks on nervousness and how to remain calm and stuff like that.”

As to what each athlete can accomplish next month, they seemed to be realistic considering the level of their competitors.

Grand’Pierre, Gaskin and Malani expressed their desire just to set new personal records in the pool.

“Being realistic, since it’s my first Olympic Games, it’s going to be really tough,” Malani said. “I guess the first thing for me to focus on is my own heat. So, just getting past my heat would be a good first goal in the Olympic Games. Once I do well in the heat and see where I’m at, then we’ll see what’s the next step.”

Schultz tempered his expectations of what Grand’Pierre, Malani, Gaskin and Ollivierre will do at the Olympics.

He said the quartet should use it as a learning experience, a stepping stone going into the future, as they should have a few more cracks of doing well at the Olympics in the future.

“I’m just hoping they enjoy themselves at this point,” Schultz said. “I think it’s just going to be a great experience for them, and they’re all very young. So, hopefully, they use this as a stepping stone to get ready for the 2020 Olympics — get the experience and race the world’s best and have some fun and learn a lot.”