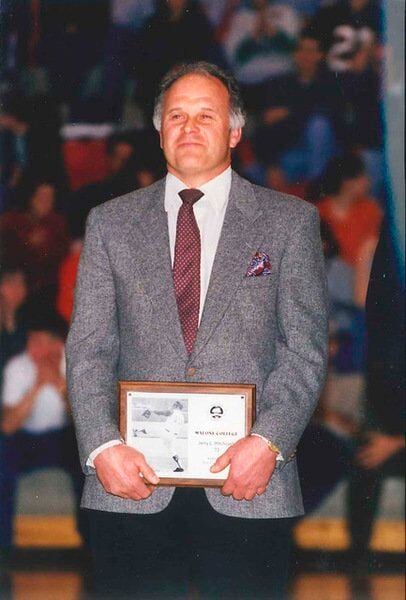 Jerry Hitchcock was inducted into the Malone College athletics Hall of Fame in 1999. The Pymatuning Valley graduate played baseball for the school in the 1960s. 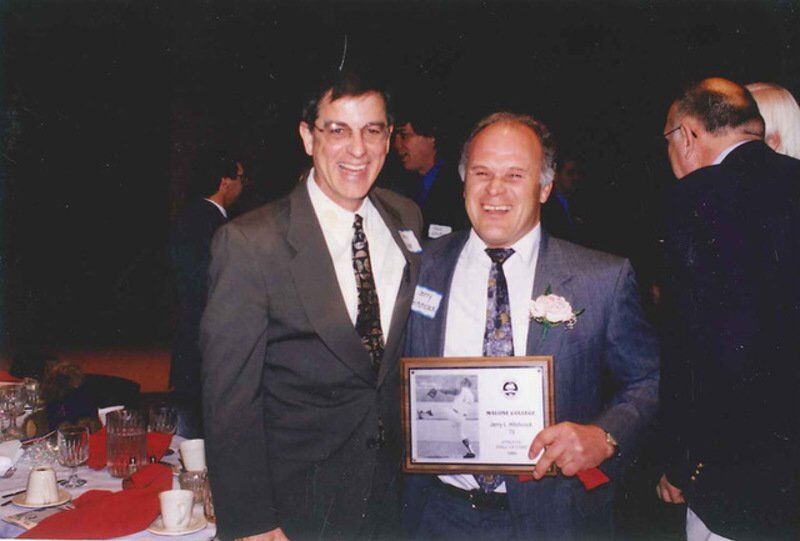 Jerry Hitchcock, right, was inducted into the Malone College athletics Hall of Fame in 1999. The Pymatuning Valley graduate played baseball for the school in the 1960s.

Jerry Hitchcock was inducted into the Malone College athletics Hall of Fame in 1999. The Pymatuning Valley graduate played baseball for the school in the 1960s.

Jerry Hitchcock, right, was inducted into the Malone College athletics Hall of Fame in 1999. The Pymatuning Valley graduate played baseball for the school in the 1960s.

Uninspired by academics in high school, Pymatuning Valley 1965 graduate Jerry Hitchcock admits to being an average student — at best.

“I wasn’t a very good student,” he said. “I never wanted to go to college. I had no idea what I wanted to do.”

Then everything changed. While attending the Richmond Center-Dorset Church when he was 19, Hitchcock fell under the positive influence of Rev. Henry King.

“In July, 1968, I accepted the Lord,” he said. “When I got saved, it took me to a higher level morally, spiritually and athletically. He saved my life.”

Hitchcock came to feel that if he was to fulfill himself, he needed to go to college. He began looking at Christian schools and finally settled on Malone College.

At the time, the fall of 1968, he was more than 20 years old, older than the average college student. When Pioneers baseball coach Tony Ladd became aware of his abilities on the baseball field, he signed him up as a walk-on.

Four years later, Hitchcock had notched four team Most Valuable Pitcher Awards and graduated with a bachelor of arts degree in Bible Literature. In 1999, he was selected to Malone University’s Athletic Hall of Fame.

“God was in it, that’s all I can say,” he said of the turn in fortunes.

Hitchcock had grown up on the family farm in Andover with his parents, Gordon Sr. and Adeline Hitchcock, and 10 siblings.

Like his other siblings, Bob and Gordon, Jr., who are in the Ashtabula County Basketball Foundation Hall of Fame, Jerry was athletic and played football, basketball and baseball at PV High School. But baseball was always his favorite sport.

“My dad was my inspiration,” Hitchcock once said. “I can remember him hitting ground balls to me all the time. He gave us all a lot of opportunities to pursue sports.”

Hitchcock grew up playing the game for Pierpont’s Little League team, then went on to play at PV under coach Joe Shantz. Over his high-school career, Hitchcock posted a 28-9 record and was a first-team All-Ashtabula County selection.

Hitchcock said he also got a lot of help from his coaches, including Pop Bermudez of Pierpont. Then, when he attended a clinic for youngsters held by the Cleveland Indians, future Major League Hall of Famer Bob Lemon showed him how to throw a curve ball.

“I had a sharp-breaking curve,” Hitchcock said of the result of that encounter. “I had a strong arm and threw the ball accurately. I think I did the most with what I had.

“I played third base and pitched [in high school]. I think I was a pretty good hitter, too. I pitched since I was 9 years old.”

Hitchcock marvels that got better in college classes than in high school.

“When God entered my life, I was sowing my wild oats,” he said. “I was probably 19 when it happened, just out of high school. It was like a second conscience. I wanted to do the right thing.”

When Hitchcock started at Malone College (now Malone University) in 1968, he made an immediate impact.

Overall, his collegiate pitching record was an impressive 26-9 (.743) with his best record of 7-1 with a 1.50 ERA in his sophomore season. Colleges, particularly northern ones, played far fewer games in those days.

Following his senior season in 1972, Hitchcock was named NAIA All-District 22 and All-Mid-Ohio Conference. He led the Pioneers to a 28-8-1 record, an NAIA District Championship and a ranking as high as seventh in the country that spring.

By the time he graduated, he ranked first in Malone history in victories (26), complete games (20), shutouts (four) and strikeouts (211).

“I was a control pitcher,” Hitchcock said. “I tried to get ahead of the hitters. My best pitches were the slider and curve, but I had a fastball and change, too.”

After graduation in 1973, Hitchcock signed on with the Sports Ambassadors to South America, a baseball squad which toured Ecuador, Nicaragua and Costa Rica.

“You had to raise your own money to get to Florida, then we flew over to South America [for the trip],” he said. “Players like Manny Sanguillen [who later played with the Pittsburgh Pirates] went. We’d play baseball and talk to the people about how we found God. There were about 15 guys and we were gone about a month.”

Hitchcock continued to play baseball after getting back from South America, competing on the Acme Scrap team and with the Jamestown (Pa.) Redbirds.

He also played American Legion baseball for the Ashtabula Rubber Company with such well-known county figures as Harvey Wells and Terry Melaragno.

“I went all over the place to play ball,” Hitchcock said. “When I was with Acme Scrap, we played teams from Cleveland and Painesville. It was like a Class B league, with older guys in it, like Columbus Williams, who played with Satchel Paige. Adam Holman played for Acme Scrap. He could really hit the ball.”

Eventually, Hitchcock tried to stretch himself too thin. It was a common fault for pitchers of that day to throw too much.

Until the latter part of the 20th Century, no one knew exactly how many pitches someone was throwing in a game, or cared. This prodigal attitude led to many ruined arms, especially since throwing a ball overhanded is an unnatural motion, particularly when the thrower is twisting his hand and arm to make the sphere spin in different directions.

Hitchcock found that out the hard way while pitching games on consecutive days for Acme Scrap in Ashtabula and the Jamestown Redbirds, adult baseball teams back in the 1970s.

“I’d pitch for one team one day and the other the next day,” Hitchcock said. “I had a good curveball. But [pitching on consecutive days] I screwed up my whole life doing that.”

Now retired, Hitchcock farmed, taught in charter schools for a couple of years and was a substitute teacher for about 20 years. He also worked for the township for 20 years.

Hitchcock married Louise, who passed away in 1978. He has three step-children. Now 73, Hitchcock lives in Andover.

He considers his Hall of Fame selection as his greatest honor.

“This is definitely the highlight of my sports career,” Hitchcock said.

But he qualifies that. When he gave his acceptance speech for the honor in Canton, Hitchcock compared it to living a meaningful life.

“I told them it’s an honor to be inducted into the hall of fame, but an even greater honor to have your name written in the Lamb’s Book of Life,” Hitchcock said.