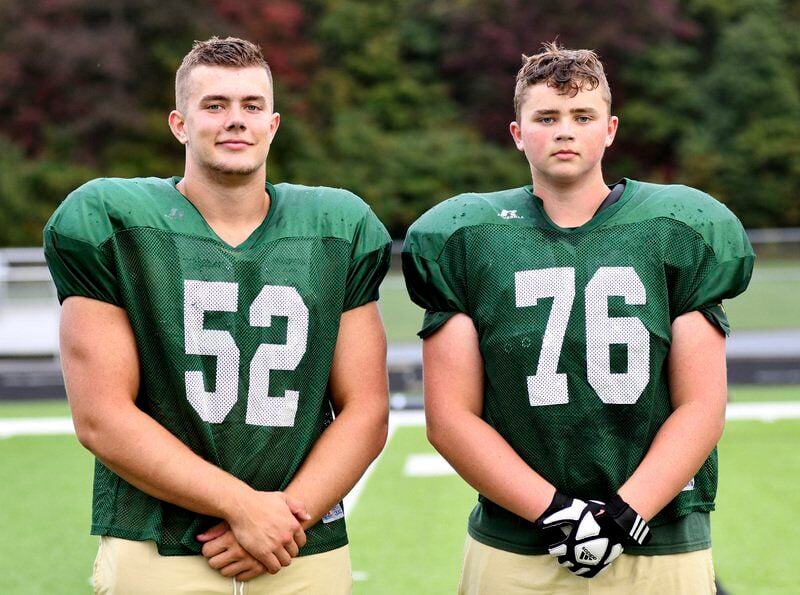 Lakeside brothers Sam, left, and Grayson Petros are a big part of the team’s line. The brothers have helped pave the way for the Dragons to rush for 1,516 yards through six games this season. 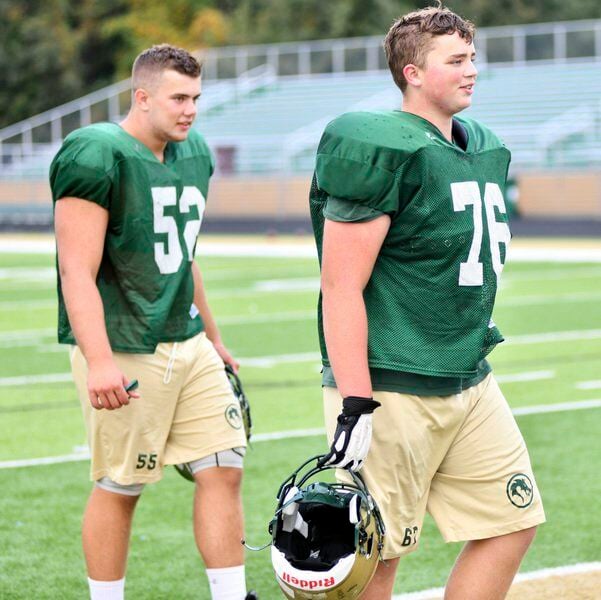 Lakeside brothers Sam, left, and Grayson Petros are a big part of the team's line.

Lakeside brothers Sam, left, and Grayson Petros are a big part of the team’s line. The brothers have helped pave the way for the Dragons to rush for 1,516 yards through six games this season.

Lakeside brothers Sam, left, and Grayson Petros are a big part of the team's line.

Sam Petros will tell you that the present is important, but also is the future.

Of course, Lakeside’s senior left tackle can also talk about the past ... how it’s nothing like the present.

This year, that has been anything but the case with the offensive line.

Anchored by Petros, with his freshman brother Grayson, at the other tackle, Lakeside has been able to control the line of scrimmage throughout the season and are now positioned with a chance to post its first winning record in nearly two decades.

The Dragons enter Week 8 with a record of 3-3. They’ll meet sate power Kirtland on Friday night before finishing the regular season with Orange and Edgewood.

The strength Lakeside has no doubt been their ability to run the football. J’Shon Sanders and Elijah Jefferson or ‘thunder and lightning’ as head coach Buzz Edwards refers to them as have averaged around 200 combined yards a game.

Sam Petros said the guys upfront take a ton of pride in those numbers.

“They’re essentially running on our backs” he said. “We’re paving the path for them.”

The running backs are the players he takes the most pride in.

Grayson Petros took over the starting right tackle spot in Week 2 against Madison. Prior to the start of the season, there was uncertainty over whether he would start on the same line as his older brother or not.

As Grayson continued to work during the summer, though, his brother believed more and more that they’d be on the field together.

“Honestly it started in the offseason,’ Sam Petros said. “Grayson kept up with me. He showed up for all the offseason stuff. Even when he didn’t have to lift, he came with me on the weekends. When his numbers started skyrocketing, when he was able to put over 400 pounds on the bar for the squat, I knew there was a chance.”

Grayson put in the work, but having his brother as a mentor gave him a huge advantage.

“We go in the backyard and practice plays all the time,” the younger Petros said. “Basically, he’s my role model, I try to copy off from everything he does.”

Players like the Petros’ are why the Lakeside program, after years of frustration, appears to be on the verge of turning the corner. Edwards believes in developing linemen in the weight room during the offseason.

The Petros boys are two players who have bought in and now provide proof that what the coach’s philosphy works.

“I think Sam is the best linemen in the county, and one of the top ones in northeast Ohio,” Edwards said. “He’s very seasoned. He started four years, he had 29 starts under his belt. He’s done nothing but work his tail off and earned everything he’s gotten.”

Looking at the younger brother now compared to where the older one was as a freshman, Edwards said the potential is extremely high.

“Grayson is just following his brother’s lead,” Edwards said. “As an older brother to a younger brother, he showed him what hard work is in the offseason. A lot of people do not understand the drive that those two kids have.

“We work out four days a week, but Sam and Grayson will work out on the weekends. Grayson is one of the most talented freshmen linemen that I have been around and I have been coaching offensive line for 17 years. I’ve had all-state players and scholarship players. Grayson has the ability and the athleticism and physical strength. He has all the tools to be even better than Sam if he continues to work as hard as he works.”

Between the Petros boys are sophomores Randy Valeriano, Hassani Sy, and Gavin Grant.

The Dragons will also have Sanders back next year, but Jefferson will graduate.

“The cupboard is getting plentiful,” Edwards said. “The future is bright.”

Sam Petros knows his future is only for a few more games. But being part of the past, and knowing what has been done to change it, he’s excited as anyone about the present and the future.

“We’re obviously trying to win now, but we’ve been building foundations,” he said. “As good as we are now, as improved as we are, a lot of those guys are going to come back. We’re done with the 3-7, 2-8 stuff, that’s no more. We’re turning this into a winning culture.”