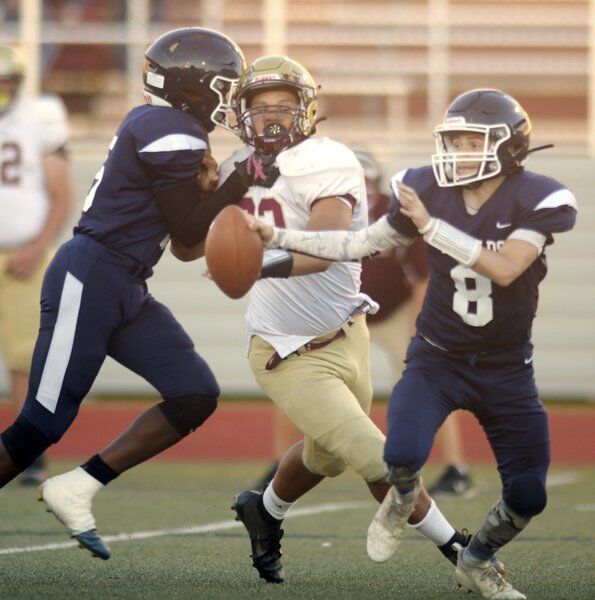 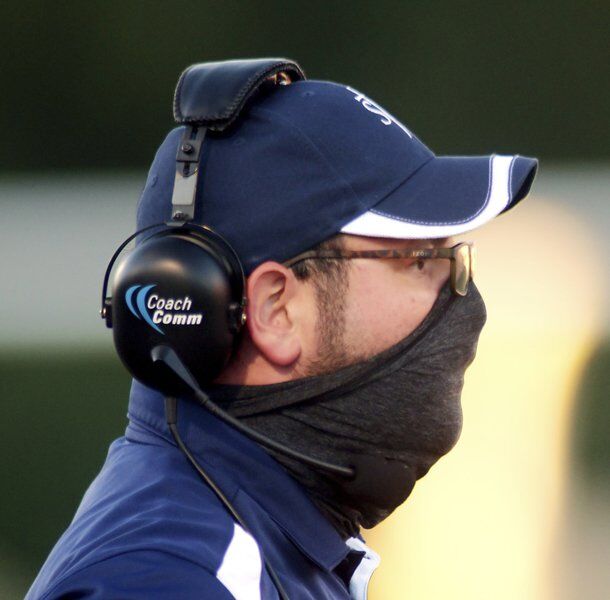 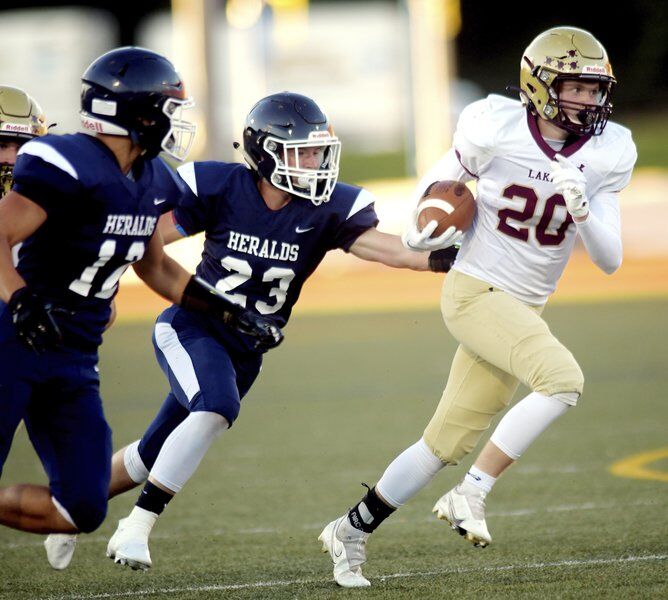 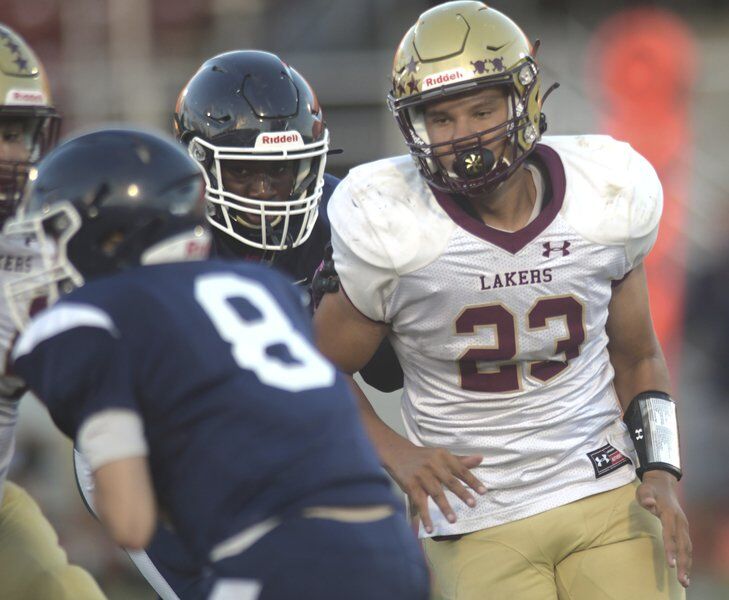 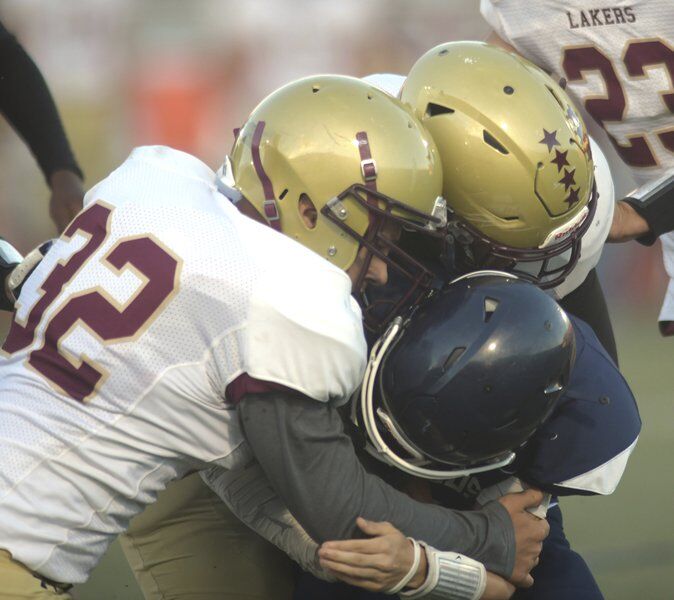 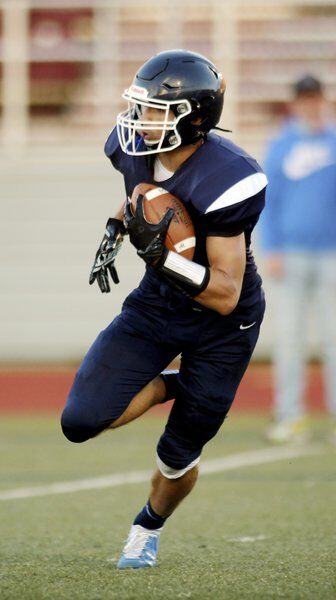 St. John's David DiSalvatore returns a kick on Friday evening during a game with Pymatuning Valley at Spire Institute in Harpersfield Township. 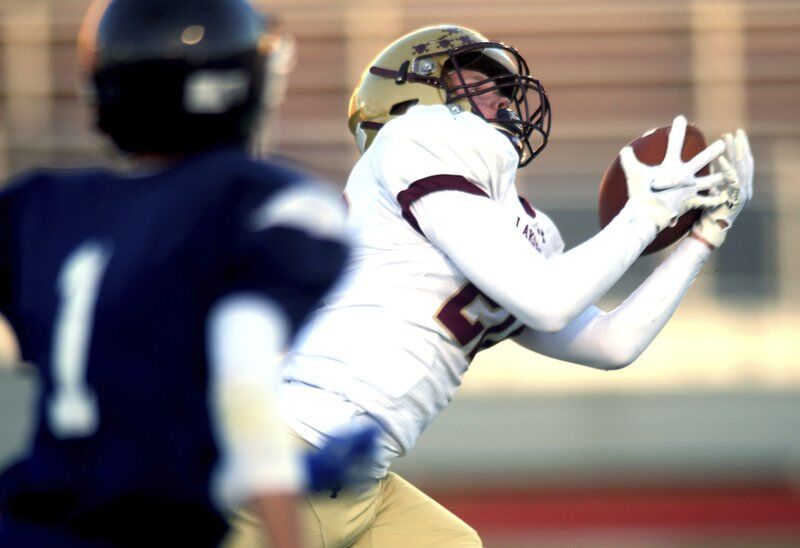 Pymatuning Valley’s Andrew Root catches a touchdown pass vs. St. John during a recent game at Spire Institute in Harpersfield Township. The Lakers head to Fairport Harbor in a battle of 3-0 teams on Friday. 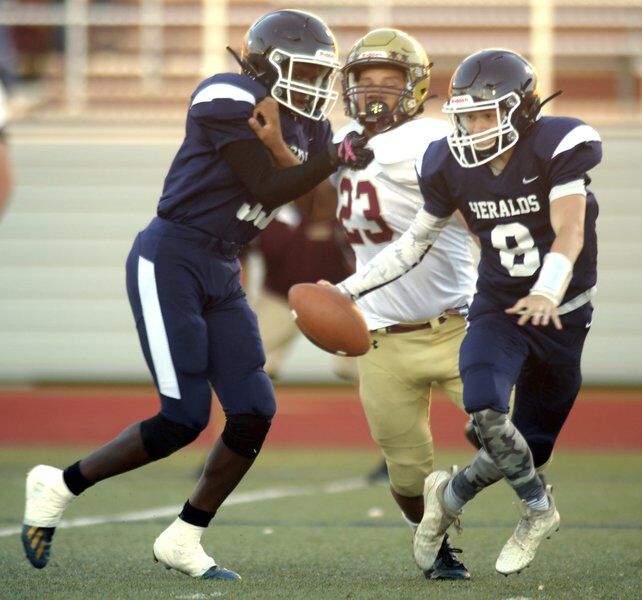 St. John's David DiSalvatore returns a kick on Friday evening during a game with Pymatuning Valley at Spire Institute in Harpersfield Township.

Pymatuning Valley’s Andrew Root catches a touchdown pass vs. St. John during a recent game at Spire Institute in Harpersfield Township. The Lakers head to Fairport Harbor in a battle of 3-0 teams on Friday.

HARPERSFIELD TOWNSHIP — Pymatuning Valley senior running back Jonah Wilkerson ran up the middle for a 59-yard gain. Multiple St. John defenders made the stop at the Heralds’ 15. Following a 13-yard run from Wilkerson, PV committed four straight penalties, moving the ball back to the 24.

“It was disappointing,” PV coach Neal Croston said following his team’s 66-0 Northeastern Athletic Conference win over St. John on Friday night at Spire. “We’ve got to move our feet and be smart. It happened last week, and it happened again. We don’t want it to be a pattern. We know eventually that can come to haunt you when you’re in a close game.”

St. John’s defense held, forcing a fourth-and-goal from the 5. On fourth down, it appeared the defense got a stop, but a pass interference call in the end zone kept the Lakers’ offense on the field. One play later, senior quarterback Tyler Bean ran for a 2-yard touchdown.PV was just getting started and rolled to its second straight to open the 2020 season.

“We don’t hit as much, we don’t practice as long anymore,” Croston said. “We wanted [our starters] to get the reps so that we could practice some things against a varsity team. That’s what we did in the first half. In the second half it was good to get our young guys in.”

The early offensive attack from senior quarterback Tyler Bean and Wilkerson helped PV jump out to a 22-0 lead in the first quarter. In the second quarter, the Lakers added 30 points, including a 22-yard touchdown pass from Wilkerson to senior wide receiver Tanner Rhoades in double coverage down the left sideline.

“Coach put me in at quarterback because I’m second string, but he put me in and let me get my one pass,” Wilkerson said. “He doesn’t let me pass, so that was the first time this season. It’s more of a wildcat thing if I go to quarterback.”

Wilkerson added more than 100 yards on the ground, a receiving touchdown, as well as the aforementioned passing touchdown. Bean threw for three touchdowns and ran for a score.

Both also helped set the tone defensively. Wilkerson regularly got into the Heralds’ backfield, and Bean snatched an interception in the first quarter, helping the Lakers extend their lead to 22-0.

A week ago against Chalker, Seth Thomas completed 11 of his 17 throws for 309 yards and four touchdowns. The defense picked off Thomas twice, leading to a short field and quick scores for the offense. Friday night, every St. John possession ended with a turnover or punt.

“We came out chanting, I said, ‘Who got my back?’ And they said, ‘I got your back,’” Wilkerson said. “That’s exactly how it feels when we’re on defense. If I mess up, I know someone’s got me.”

PV will play Chalker on Friday. The different offensive approach from the Wildcats could help highlight a talented Lakers defensive front, even more so than this week.

“[Chalker is] more of a linemen-type team,” Croston said. “[They use] double tight end, I-formation so our guys like that physical stuff. It’ll be good for us to see a different team. This week was all spread. It’ll be another challenge, and our guys will be up for it.”