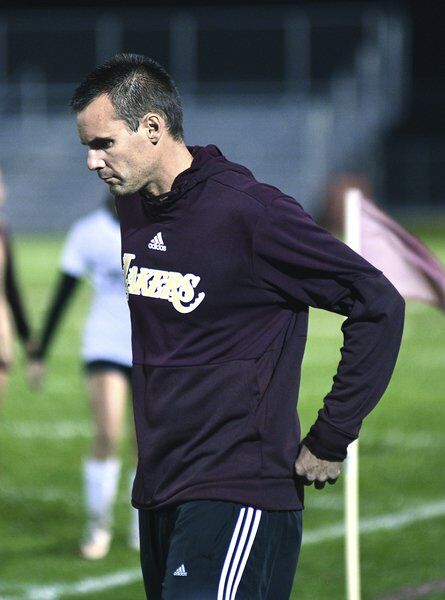 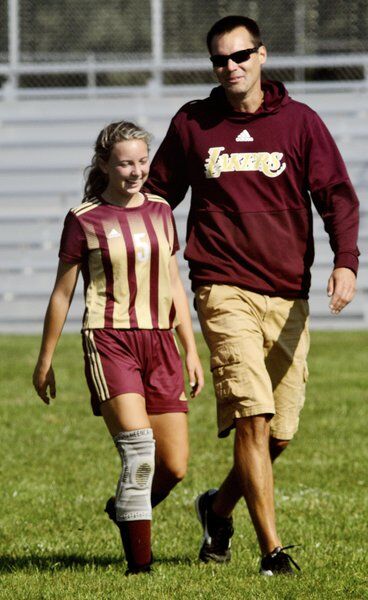 Pymatuning Valley head coach Jerry King, right, walks off the field with Zoey Painter after an inury during a home match with Grand Valley in September. 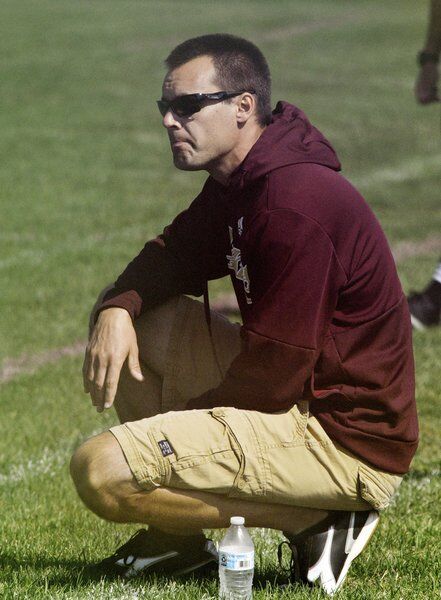 Pymatuning Valley head coach Jerry King watches the action during a home match with Grand Valley in September. King has been selected the 2021 Ashtabula County Girls Soccer Coach of the Year.

Pymatuning Valley head coach Jerry King, right, walks off the field with Zoey Painter after an inury during a home match with Grand Valley in September.

Pymatuning Valley head coach Jerry King watches the action during a home match with Grand Valley in September. King has been selected the 2021 Ashtabula County Girls Soccer Coach of the Year.

Entering the 2021 soccer season, Pymatuning Valley girls coach Jerry King knew his team had the type of defense that could keep the Lakers in most games.

“I just didn’t know if we could score enough to win,” he said.

As the season went along, it was quite clear that they could.

PV went 14-1-1 this season. Not only did the Lakers win the Northeastern Athletic Conference championship, but they did so by defeating traditional powerhouse Badger twice, something that no PV team had done before. They also advance to the Division III district tournament.

For the team’s success, King has been named 2021 Girls Soccer Coach of the Year.

The coach said he had reason to believe his team could have success, but what his team accomplished this season clearly exceeded his expectations.

The Lakers had plenty of heroes this season. Offensively, they scored 86 goals, which was more than doubled the number of goals they scored a year ago.

Sophomore Leah DeMoss returned healthy and led the way with 25, but she had plenty of help. Freshman Zoey Painter, who was new to the game along with Ruby Beck, another sophomore, complimented DeMoss with another 25 goals between the two of them. Thirteen other PV players also scored at least one goal.

“As a group, our entire offense played really well this year, they really exceeded my expectations,” King said.

Where the Lakers really stood out, though, was on defense.

PV allowed only 20 goals on the season, which was a carryover from the year before in which they gave up 22.

“We had a really good defense, including our goalie, Ellie Struna,” King said.

Struna was strong in the net, but the players in front of her certainly made her job much easier.

Over the past two years, King said Struna averaged between 150-170 saves per season. This year, the number was down to just 86. The reason was teams simply were not getting shots off at her.

Cassie Clute, senior captain and first-team All-NAC player, Brooke Gray, and the trio of Sydney Morrison, Grace Stroke, and Mya Skarlinsky combined to diffuse opposing offensive attacks before they could get started.

“Those five were our five main defenders all year and they did a really nice job,” King said. “They could just shut down an offense. They did not even allow good shots on goal. That is how well they played.”

The Lakers’ lone defeat was against eventual regional finalists South Range 3-0. Even in that game, the PV defense stood strong.

“Their first goal was not until 37 minutes into the first half,” King said. “It was 1-0 at halftime. As the half went on, you could see South Range starting to press, starting to bark at each other a little bit. Our defenders kept them in front and kept them frustrated for much of the game.”

PV will graduate four seniors this season, including captains Struna, Clute, and Kali Seimbor and Zara Haffa. There will be a lot of talent returning, though, and the players returning lend optimism that the program can be strong for the foreseeable future.

“I hope so,” King said. “We’ve never returned our leading scorer in the last eight years that I’ve been here. Next year, we’ll return not only our No. 1 scorer but our No. 2 scorer as well. We have a nice group of kids coming back and it’s fun. I feel like we can still be good.”

JEFFERSON [emdash] Robert K. Weisdack, 70, passed away December 3, 2021, at the Cleveland Clinic from complications of COVID-19. Funeral services are incomplete and will be announced by the Fleming-Billman Funeral Home, 49 W.Jefferson Street, Jefferson. www.fleming-billman.com