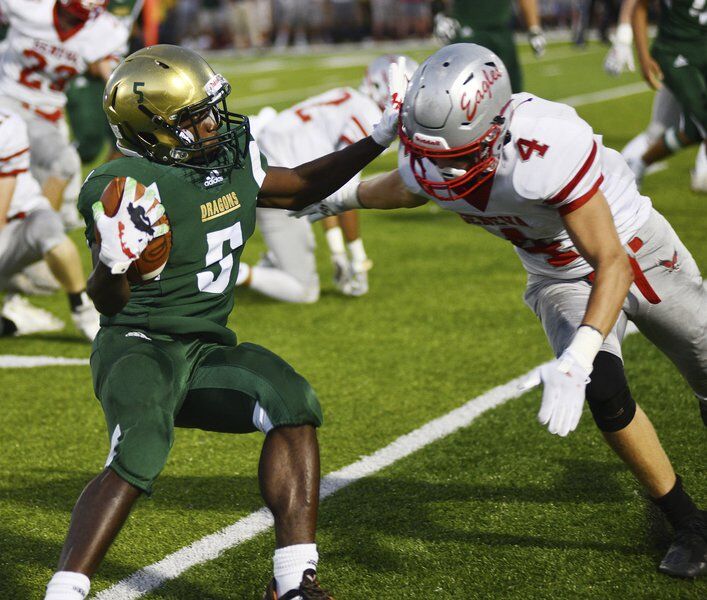 Lakeside’s Elijah Jefferson (5) straight arms Geneva’s Luke Smith on his way to a touchdown on Friday night at Lakeside. 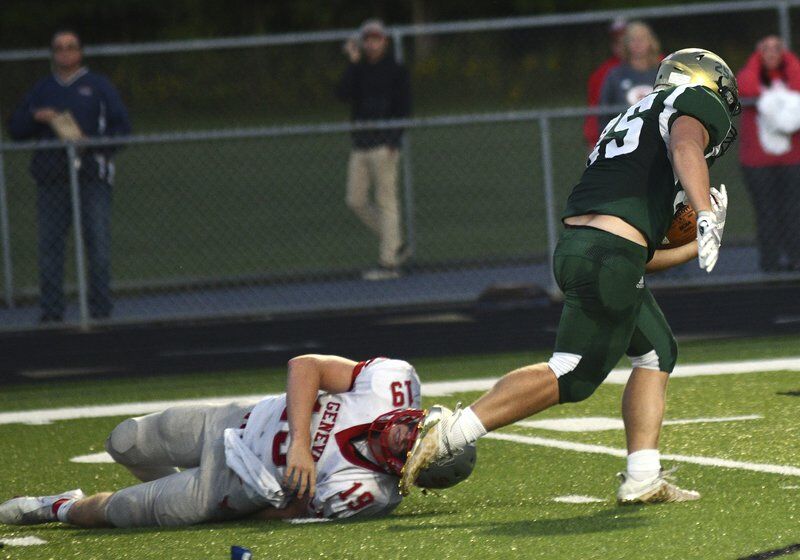 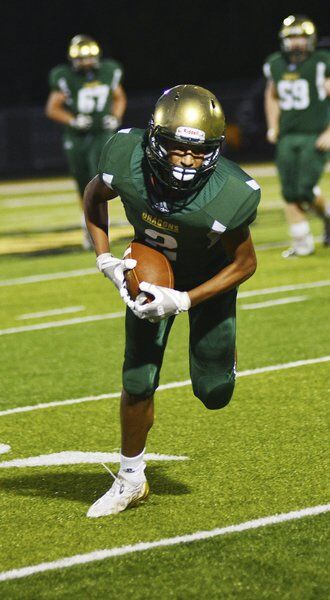 Lakeside's Jamil Haynes grabs a pass on Friday night during a home game with Geneva.

Lakeside’s Elijah Jefferson (5) straight arms Geneva’s Luke Smith on his way to a touchdown on Friday night at Lakeside.

Lakeside's Jamil Haynes grabs a pass on Friday night during a home game with Geneva.

SAYBROOK TOWNSHIP — The way the Geneva-Lakeside game started Friday night seemed to fit the bill for how the contest has gone for the past several years.

Lakeside, on the other hand, went three and out on their first possession followed by quarterback Garrette Siebeneck throwing an interception in the endzone on their second look.

But in the second quarter, things changed … in a hurry.

Lakeside recovered two onside kicks, the offense put together three scoring drives and Morgan Bish scooped up a fumble for an 18-yard touchdown run as the Dragons took command and cruised to a 42-7 win over the Eagles at Lakeside High School.

The win snapped a nine-game losing skid to Geneva that dated back to the time, most of the Lakeside players were likely in preschool. Last year, the Eagles won 35-13 at SPIRE and 41-12 the year before.

To be on the other side of the scoreboard meant a great deal to Lakeside coach Buzz Edwards because of the respect he has for the Geneva program.

“When I came in here, we modeled what we do after them,” Edwards said. “They have good kids, they have good coaching, they lift weights, they have a good off-season program, so it’s good for our kids, after taking our lumps from them two years in a row.”

Forcing a Geneva punt deep in their own territory, the offense took over at the Eagles 36, and quickly scored on a five-play drive, capped by a 6-yard run by J’Shon Sanders.

On the ensuing kick-off, Lakeside placekicker Chris Chamberlain spun an onside kick that Thomas Allen was able to fall on. It would be the first of two onside kicks the Dragons recovered in the second stanza. Jimmy Timonere would snatch the second one out of the air after it bounced off a Geneva up-man.

The onside kick has become quite the weapon for the Dragons this season.

Tied at 7, an unsportsmanlike conduct penalty would stall a Lakeside drive inside the 20.

The scoop and score by Bish, though, made up for the missed opportunity.

The second onside kick recovery then set up a 40-yard touchdown run by Elijah Jefferson.

After a stop by the defense, the Dragons closed out the half by ripping off 68 yards on seven plays in less than 90 seconds with Sanders going in from six yards out to finish the drive.

Edwards said the way Geneva came out was no surprise, but the way his players responded made him very proud.

“We knew they were going to come out and we knew they were going to be physical,” Edwards said. “We had to get our wheels underneath us. I think it took us a series or two to get that physicality that they play with and that speed that they play at the line of scrimmage with. Our kids responded well though, you blinked and it was a different game and I’m really proud of them tonight.”

Lakeside added two more scores in the second half on a 3-yard run by Jefferson in the third quarter and an 8-yard run by Lorenzo Lagoa in the fourth.

Sanders and Jefferson finished the game with a combined 291 yards on 29 carries with three scores. AJ Raffa added 79 yards on eight carries and Lagoa finished with 39 on seven rushes. Siebeneck completed 6 of 8 passes for 49 yards with the interception.

The Geneva touchdown on the opening possession came on a 1-yard plunge by quarterback Wyatt Fuduric.

The Eagles (1-3, 0-2 CVC) will be home to Kirtland on Friday, while Lakeside will travel to Perry the same night.