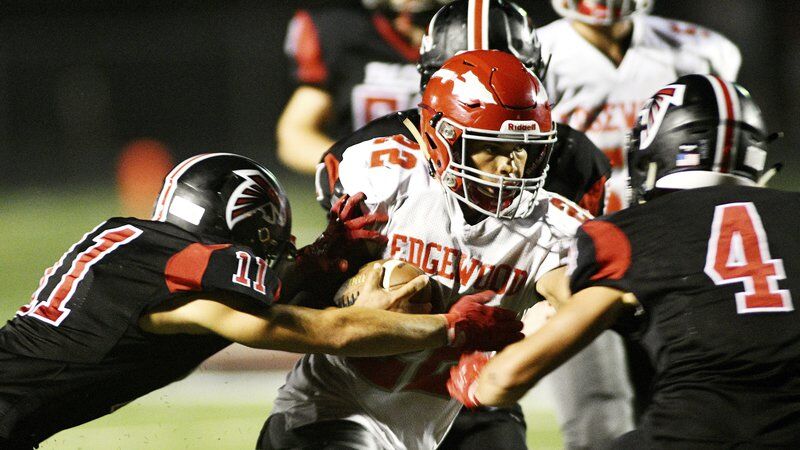 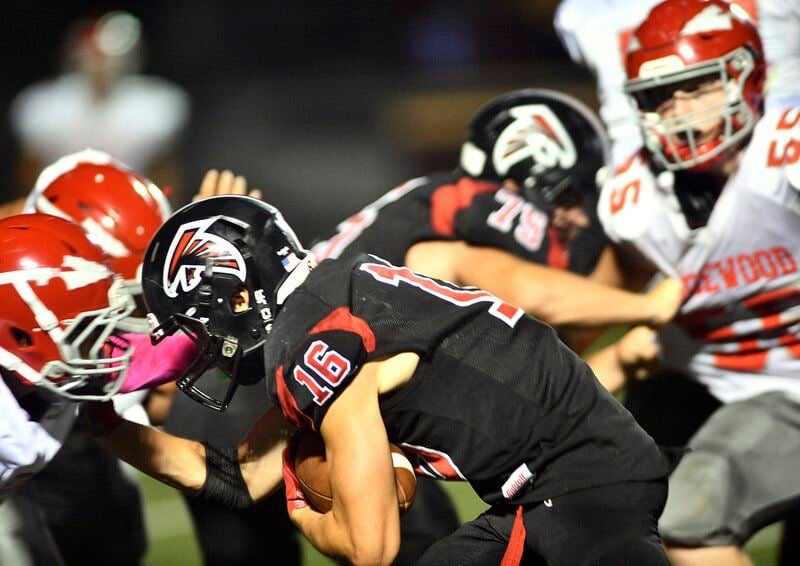 Jefferson’s Luke Funtash (16) runs in for a touchdown on Friday evening during a home game with Edgewood at Falcon Pride Stadium in Jefferson. 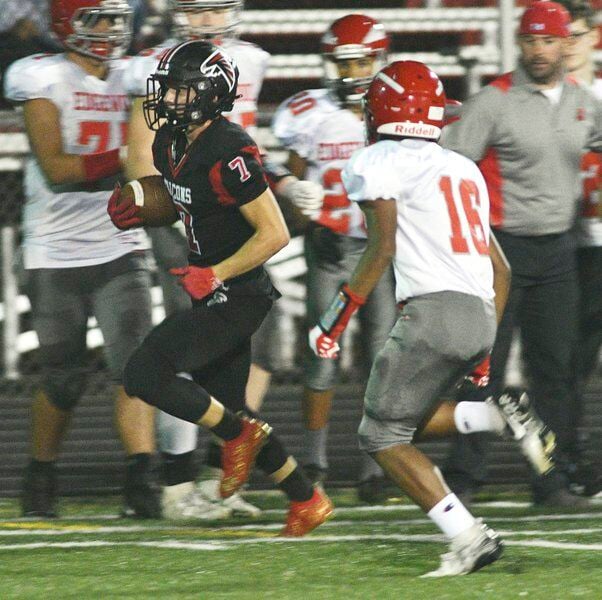 Jefferson's Trent Hodge is run out of bounds after a long gain during a recent home game against Edgewood at Falcon Pride Stadium in Jefferson.

Jefferson’s Luke Funtash (16) runs in for a touchdown on Friday evening during a home game with Edgewood at Falcon Pride Stadium in Jefferson.

Jefferson's Trent Hodge is run out of bounds after a long gain during a recent home game against Edgewood at Falcon Pride Stadium in Jefferson.

JEFFERSON — The last time a Jefferson football team was 3-0, Trent Hodge was in the fourth grade.

Seven years later, the Falcons are undefeated again, and Hodge is a big reason why. The junior put on a display full of highlight film material in Jefferson’s 48-21 win over Edgewood at Falcon Pride Stadium on Friday night.

Hodge was dominant in all three phases of the game. Offensively, he had a 47-yard touchdown pass, along with a screen pass that went for 78 yards, setting up another score.

On special teams, he returned a kickoff 80 yards for a touchdown and also caught a 2-point conversion.

And he was tasked with keeping the Warriors’ Izaiah Harris in check.

The win not only equals the Falcons’ best start since 2014, but it’s also the first vs. Edgewood since 2017 and the three wins have already  matched last season’s total.

Hodge said he and his Jefferson teammates are enjoying being compared with some of the best teams in recent Falcon history.

“It feels great,” he said. “Especially knowing that I grew up watching those people, they were the last ones to do it and it’s great that I grew up and had the chance to do it,”

Edgewood (1-2) struck first in the game, getting a 45-yard touchdown pass from Zak Winchell to Christian Cunningham on its opening drive.

The Falcons charged back, though, scoring four times unanswered to grab a commanding 28-7 advantage.

It started with Falcons quarterback Grant Hitchcock connecting with Jonathan Waszil on a 42-yard completion to set up first and goal at the 1-yard line. Luke Funtash took it in one play later.

One possession later, Hitchcock scored on a 6-yard scamper to put the Falcons up 14-7.

Then it was Hodge’s turn to make his presence known.

On a third and 22 play from the Falcons 22-yard line, Hitchcock hit him on a screen pass that looked more like a safety outlet to gain a little field position before punting.

Instead, Hodge followed his blocks and raced 78 yards to the Edgewood one, setting up another scoring plunge for Funtash.

The play may have seemed like a conservative call, but anytime Hodge has the ball in his hands, he feels like he can make a big play.

He broke the Warriors back again in the second half. After an Edgewood score cut it to 28-15, Hodge took the ensuing kickoff 80 yards to stem any momentum the visitors may have built.

His teammates provided plenty of highlights as well. Hitchcock finished unofficially 9 of 16 passing for 261 yards with three touchdowns, while Funtash rushed for 155 yards on 27 carries.

First-year coach Brandon Hanna said the strong start is the fruits of the labor his team has put in.

“What we’re seeing now is the result from the work these kids put in,” he said. “We scrimmaged Cardinal Mooney, we scrimmaged Perry, then we’ve been on the road the last two weeks. If you saw the energy in the school all week from the administrators to teachers, to the band and cheerleaders, you wouldn’t be surprised. These kids have been fighting to put on a good show Friday night.”

On the opposite sideline, Edgewood interim coach Olajuwan Cooper credited the Jefferson offense but said his team did not do a good enough job of taking advantage of favorable situations when they occurred.

“Honestly, I wasn’t concerned with their big-play ability, I was more concerned with stopping the run,” Cooper said. “We had them in great situations, but Hitchcock got them out of there, find guys open downfield, so kudos to him, he’s a great athlete”