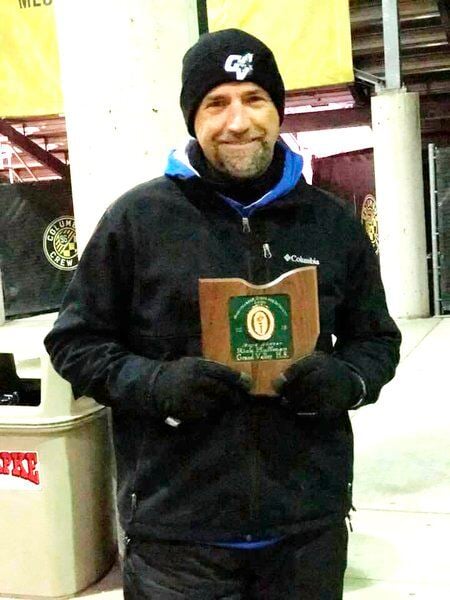 Grand Valley’s Rick Huffman has been selected the 2020 Ashtabula County Boys Soccer Coach of the Year. The Mustangs reached the Division III district tournament this season.

Grand Valley boys soccer coach Rick Huffman, standing right, talks to team after a match. Huffman has been selected as the 2020 Ashtabula County Coach of the Year

Grand Valley’s Rick Huffman has been selected the 2020 Ashtabula County Boys Soccer Coach of the Year. The Mustangs reached the Division III district tournament this season.

Grand Valley boys soccer coach Rick Huffman, standing right, talks to team after a match. Huffman has been selected as the 2020 Ashtabula County Coach of the Year

Six years ago, Rick Huffman took over the inaugural boys soccer team at Grand Valley. Prior to that season, the team was coed.

Huffman, who earned Ashtabula County Coach of the Year honors this season, had a 10-year plan in mind. He went to work crafting his image of the program.

Huffman knew the first year would be a challenge so he set manageable goals for his team.

He wanted his team to focus on small things they did in each game and to pay less attention to the opponent or the score. Though GV was outscored drastically en route to an 0-15-1 season, Huffman noticed development throughout the season. The Mustangs’ tie came in their final game, which showcased their marked growth as a team.

“I told them they were improving, and the parents saw there was incremental improvement.” Huffman said.

In the second year, the Mustangs improved to 3-13, followed by a jump to 7-9 the next season. In that third year, the conversations began to change from more basic fundamentals to slightly more advanced concepts like spreading the field more effectively.

“Again, cranking up the fitness, working on the fundamentals, teaching ball movement, teaching communication,” Huffman said. “Really trying to explain to some kids just because you’re good at rec because you’re the bigger, stronger, faster kid that doesn’t mean anything when you’re playing a good and technical soccer team.”

Huffman’s program began to produce better results as more people started buying in. His attention to detail involving the program could only be surpassed by his down-to-earth approach with his players. Parents and players alike began buying in because they knew he cared.

“I’m vulnerable with them,” Huffman said. “When I was a high school freshman, I couldn’t do a pull-up. I was embarrassed. I didn’t know how to do a push-up correctly. I [tell them], ‘Quit worrying about the guys to your left and right. Focus on you.’ They start doing that, and guys cheer them on. It’s special. I’m very, very proud of what we’re creating.'"

During this offseason, the entire team ran under 22 minutes for the three-mile time trial. Those times were closer to the 40-minute mark six years ago and steadily improved each offseason.

The team that once focused on just kicking the ball and learning the fundamental basics are now playing soccer Bocce during practice. They try to hit moving balls with passes and shots from all over the field to improve ball placement for tighter window situations.

This season ended with a school-record 11 wins and a Division III district semifinal appearance.

The Mustangs lost 5-1 to perennial powerhouse Badger, but three second-half goals made the game appear like a blowout.

Huffman wants to compete in the district final next season.

“We know there’s obviously some powerhouse teams, especially coming from the south,” Huffman said. “We understand that. We want to play high level teams. The boys are relishing that. The big thing that jumps out to me is they have confidence.”