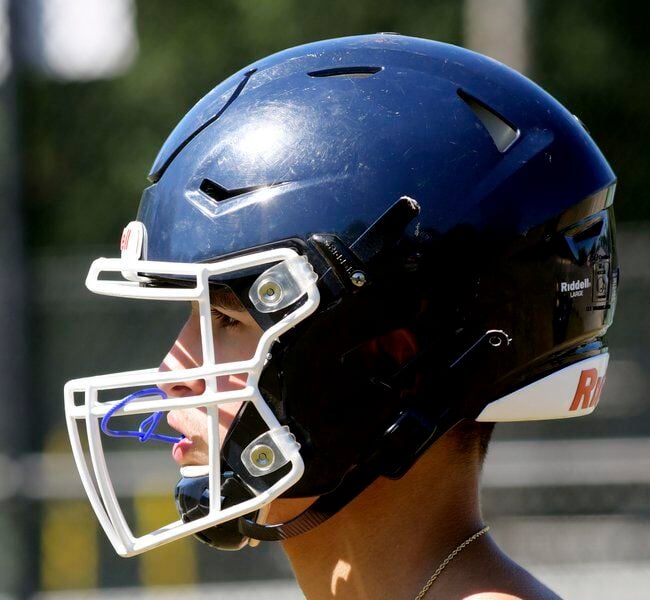 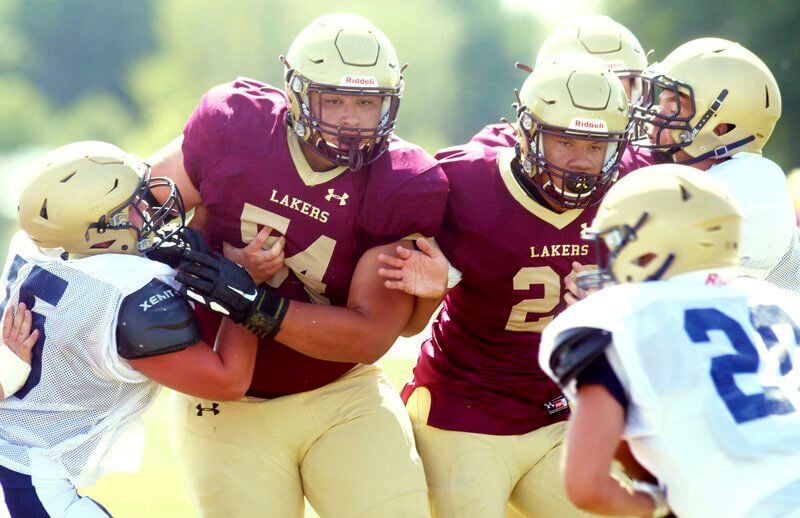 In this August 2020 file photo, Pymatuning Valley's Victor Verba, left, and Jonah Wilkerson clog the area during a running play vs. Conneaut in a scrimmage at Andover Township. The Lakers are scheduled to play St. John in a battle of 1-0 teams Friday at the Spire Insitute.

In this August 2020 file photo, Pymatuning Valley's Victor Verba, left, and Jonah Wilkerson clog the area during a running play vs. Conneaut in a scrimmage at Andover Township. The Lakers are scheduled to play St. John in a battle of 1-0 teams Friday at the Spire Insitute.

For the St. John Heralds, a big Week 1 win will be followed up with a big challenge as Pymatuning Valley travels to the Spire Institute for a Northeast Athletic Conference showdown Friday night.

Winless in eight tries a year ago as an 8-man team, the Heralds returned to 11-man football this season and opened with a 34-14 win over Chalker on Saturday.

This week, they’ll tangle with the Lakers, who are also 1-0 after downing Windham 32-0, also Saturday.

For St. John, PV should present a big challenge, in that they are just that —  big.

The Lakers used their monstrous line to dominate both sides of the football against the Bombers. PV ran behind Victor Verba, Thurmond Adkins, and a few others up front, and racked up 182 yards on the ground. Quarterback Tyler Bean led the way with 84 yards on 11 carries.

The Lakers linemen all tip the scales at the 200-plus mark. The Heralds, on the other hand, do not have anyone over 200.

“They’re definitely bigger than us,” Heralds coach Bob Dlwgosh said. “They just pounded the ball against Windham, which is what they should have done and I’m sure they’ll do the same against us. That’s OK, we just have to be ready for them.”

PV coach Neil Croston did not shy away from the strength of his offense.

“We have a big physical line, that’s where it starts,” Croston said. “Then, we have a few backs Jonah Wilkerson and Dillon Knowles ... two seniors that played well for us. We also have a big fullback in Devin Ray that did a lot of blocking for us. That was definitely the plan going in.”

Against Windham, aside from the rushing output of Bean, the Lakers also received a 36-yard touchdown run from Wilkerson and two scoring runs from Knowles.

The PV defense matched matched its offense. The front four spent a lot of time in the backfield, which led to two interceptions each from Andrew Root and Mason Inman.

“The front four of Robert Verba, Adkins, Brendon Sharpe, they just created chaos all game,” Croston said. “Other than one or two runs, Windham didn’t have much on the run and when they did it was either a bad throw, sack or interception.”

St. John is a team expected to play a ball control offense, but on Saturday, the passing game paved the way to a win.

Dlwgosh said the plan early was to establish the run, but when it wasn't there they had the confidence in Thomas to air it out.

“With Division VII football, you have to be able to adapt to what they give you,” Dlwgosh said. “But, the nice thing is we have so much confidence in Seth and we have skilled players that can make plays.”

Senior David DiSalvatore, who had two touchdowns and 155 receiving yards against Chalker, is among the St. John playmakers Also soccer player, he scored three goals against PV on Aug. 27 after netting two vs. Brookfield the night before.

While the Lakers have the size advantage, Croston knows St. John will have a plan of attack.

“Definitely,” Croston said. “One thing about watching them on film, they stay low and they shoot gaps. Our guys have to ready for that. Not, to say that Windham didn’t get off the ball, but St. John looks like they get off the ball pretty fast so guys are going to have to move their feet and keep them in front."

The two schools did not play each other last year after games from 2016-2018. PV won two of the three outings.

Aside from a Ashtabula County matchup, it is also the first time they are playing as conference rivals with the Heralds now in the NAC.

“it’s a Friday night against a county school,” Dlwgosh said. “Both teams are 1-0 and there’s a tremendous buzz in the building about the game.”

KINGSVILLE [ndash] Jeanne M. Edixon, age 68, died Wednesday, September 16, 2020 at her home. At the request of the family no services will be held. Raisian Funeral Home has been entrusted with her arrangements.