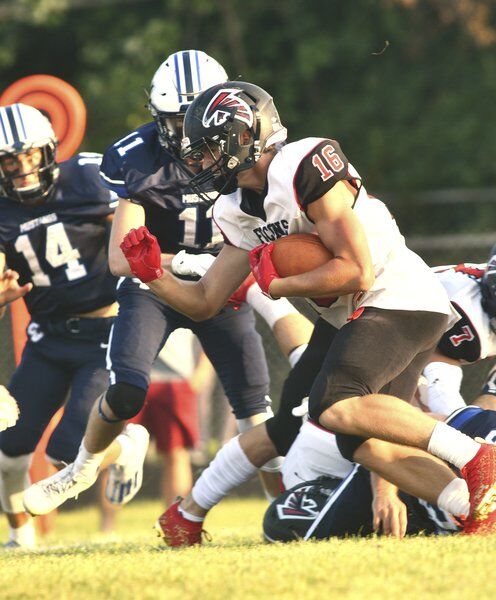 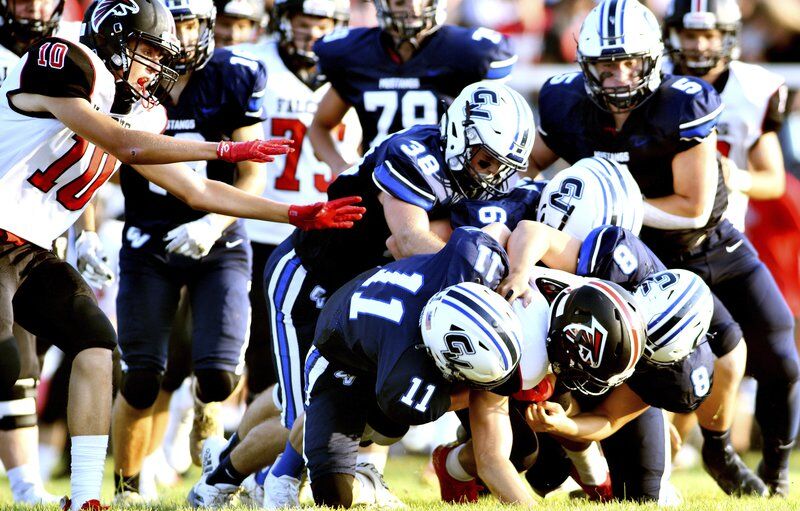 ORWELL – Luke Funtash waited a year before seeing the field with the Jefferson varsity football team. He finally got his name called as a starter on Friday night.

Funtash, along with Falcons quarterback Grant Hitchcock, ran through the Grand Valley defense as Jefferson beat the Mustangs 48-8.

It was also the first victory for Jefferson head coach Brandon Hanna. After the game, Hanna was speechless. He took the ceremonial Gatorade bath and hugged his assistant coaches before addressing the team.

“This program’s been through quite a few things, really, in the past several years,” Hanna said. “We have a great group of kids right now that have truly bought in from the moment I got hired.”

“I just wanted to run hard,” Funtash said. “I know I have a good offensive line so I just want led to follow them and see what I could do and show people what I’m capable of.”

Hitchcock wasn’t going to be outdone, however.

Hitchcock had TD runs of 24 and 73 yards in the second quarter. He also had two touchdown passes.

Hitchcock finished 11 for 17 with 164 yards and an interception. He ran for 114 yards on six carries.

The Mustangs lost their 11th straight after dropping the season opener. They went 0-10 last season.

Offensively, the Mustangs (0-1) were unable to get anything done unless quarterback Nathan Boiarski was running the ball.

Boiarski had 90 yards rushing on 10 carries. He was 10 of 29 for 77 yards passing and two interceptions.

Casey Turner scored the only GV points of the night on a fullback dive in the first quarter. He also punched it in for the 2-point conversion.

“We gotta make sure we’re doing what we need to do,” Mustangs head coach Clint Nims said. “We can’t have receivers running the wrong routes. We need to have everybody on the same page.”

As a sophomore, Funtash already earned Hanna’s trust in camp. Hanna didn’t think the Falcons would have trouble running the ball in his first year, and Funtash repaid the trust on Friday.

“We could be more proud of the kid,” Hanna said. “Running the way he’s running, getting his pad level lower and just breaking away.”