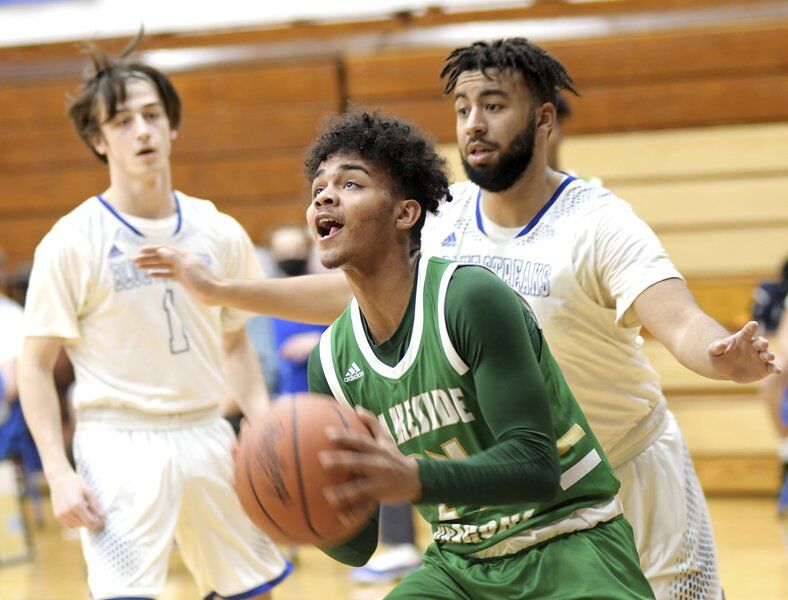 Lakeside’s Dasjaun Williams, with ball, goes up for a shot against Madison defenders Shane Gibson (1) and Jesse Martin on Tuesday evening at Madison. 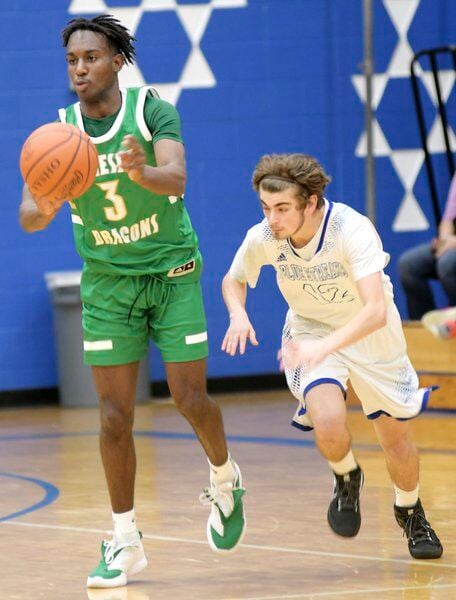 Lakeside's Dominic Parsons throws an outlet pass after a rebound as teammate Sean Allgood follows the play on Tuesday evening at Madison. 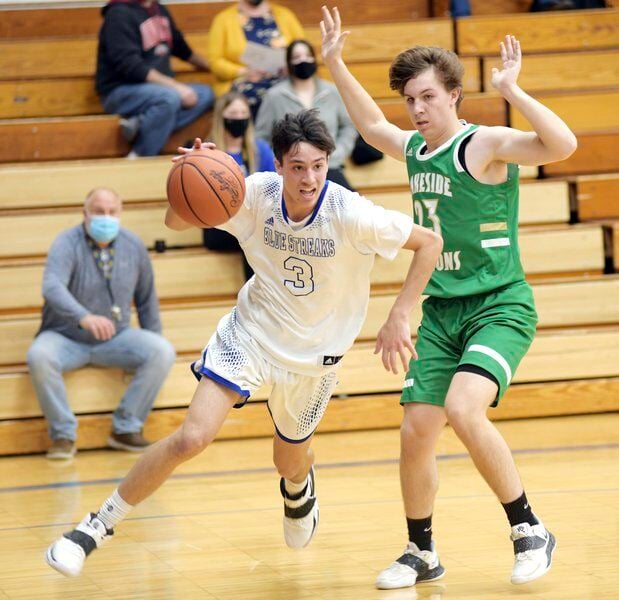 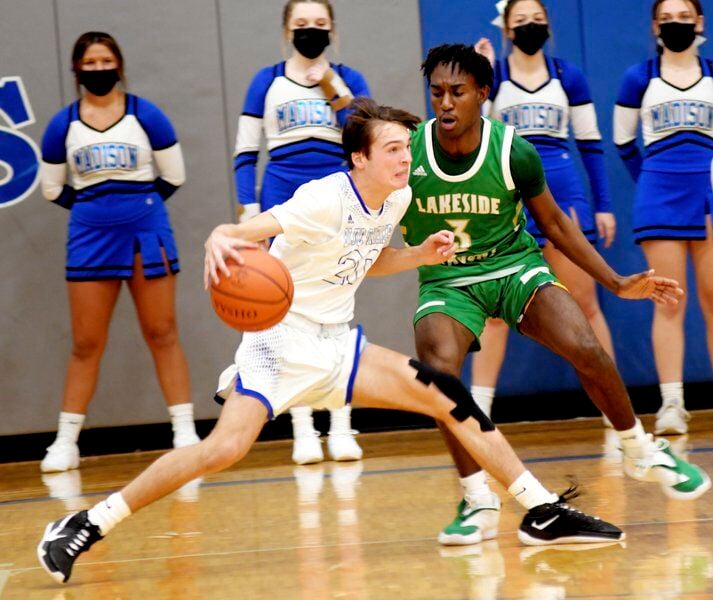 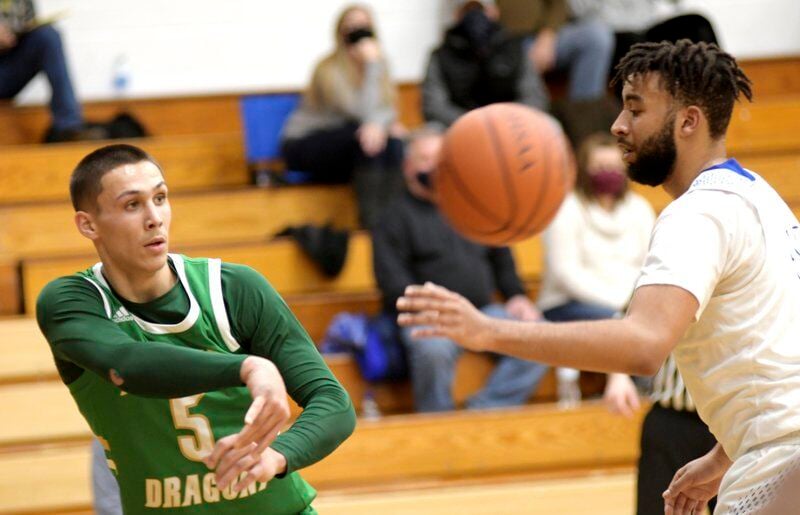 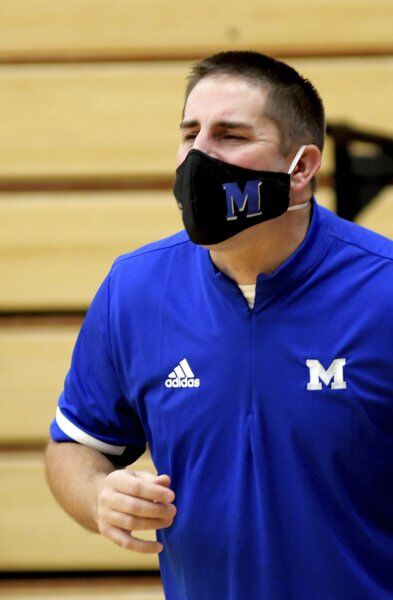 Madison's head basketball coach Nick Gustin yells instructions to his team on Tuesday evening during a home game with Lakeside.

Lakeside’s Dasjaun Williams, with ball, goes up for a shot against Madison defenders Shane Gibson (1) and Jesse Martin on Tuesday evening at Madison.

Lakeside's Dominic Parsons throws an outlet pass after a rebound as teammate Sean Allgood follows the play on Tuesday evening at Madison.

Madison's head basketball coach Nick Gustin yells instructions to his team on Tuesday evening during a home game with Lakeside.

MADISON — Lakeside coach Matt Newsome calls Brandon Ford one of the most unselfish players you’ll ever meet. That unselfishness, however, does not mean the reigning Ashtabula County Boys Basketball Player of the Year is above taking over a game if need be.

After watching the Dragons turn the ball over on four consecutive possessions to open the second half, Ford took matters into his own hands, scoring 11 points to go with an assist in an 86-81 non-conference win over Madison on Tuesday.

As a player, Ford loves to get everyone involved, but he also recognizes when it’s his time to step up.

“We have a good team,” Ford said. “But sometimes, I just feel like there’s a time I need to put the team on my back and lead us to victory.”

By time the night was over, Ford had led his team by stuffing the stat sheet with 33 points, 14 rebounds and six assists.

The Dragons (3-1, 1-1 Chagrin Valley Conference) jumped out early, only to see the Blue Streaks fight back a couple of time before taking a 46-36 lead to the lockerroom.

After fumbling the ball away a few times, Lakeside took off on a 17-6 run to open up a 21-point lead, capped by Dom Parsons’ basket and-one that made the score 66-45 with 2:10 to play in the quarter

Ford had 12 of his 33 points during the quarter.

“He’s a phenomenal player,” Newsome said. “There’s not a lot of players like him in the area at this time, but at the same time, he is also one of the most unselfish players. His whole thing coming out of the meeting this week was he wanted to be able to share the ball, for other guys to get time and we made that a priority [tonight].”

In spite of Ford’s jaw-dropping performance, the Blue Streaks were not in awe and fought back.

Playing its season opener, Madison trimmed the deficit to 68-53 by the end of the third quarter.

Then, behind eight points from Brandon Kasonovich in the fourth quarter, the Blue Streaks were able to get as close as 82-77 with 1:11 to play.

But a pair of free throws by Ashton Wheelock, a stop at the defensive end and a basket in the paint by Parsons off a dish from Dasjuan Williams sealed the matter for the visitors.

“It was our first game in a long time, so I can’t fault our kids’ efforts,” Madison coach Nick Gustin said. “They [Lakeside] shot the ball really well and we didn’t put enough pressure on them, especially in the second quarter when they scored 29 and that was the game essentially.”

As for trying to slow down Ford, that is something is happy to likely not have to worry about again.

“I’m glad I don’t have to see him anymore,” Gustin said with a laugh. “He’s a really good player, he hurt us last year as well and he’s a big reason they have a chance to have a really successful season this year.”

For Newsome to see his team surrender the big lead but still have the poise to still get out with the win was something he called a big part of the process of becoming a better team.

“Absolutely,” Newsome said. “Something we constantly talk about is how we respond to adversity and I thought tonight was a good example of how they were able to positively turn a bad situation into something good.”

Aside from Ford’s 33 points, the Dragons got 19 from Parsons and 18 from Williams.

Next up for Lakeside is two home contests. The first is vs Geneva on Friday night followed by Pymatuning Valley on Saturday. Madison will be on the road at Mayfield on Friday.