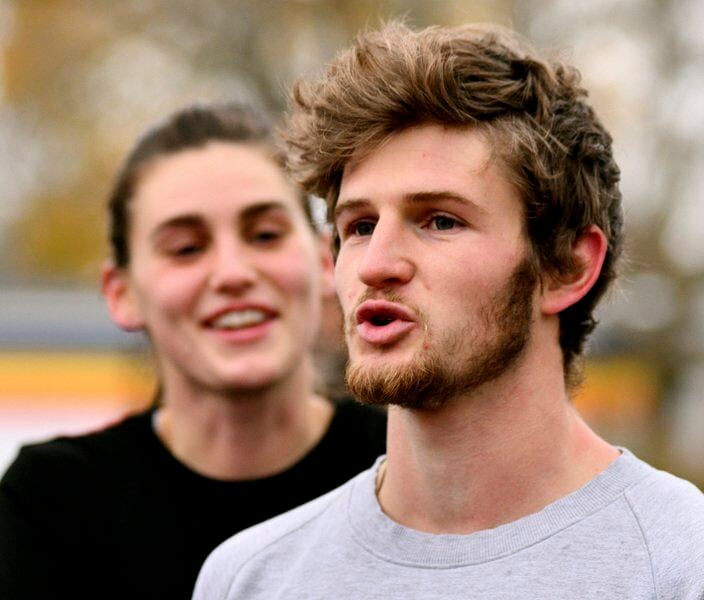 Jake Ondash, right, and his girlfriend, Alyssa Thomas won the men’s and women’s divisions of the Miracle Mile on Thursday morning in Ashtabula. 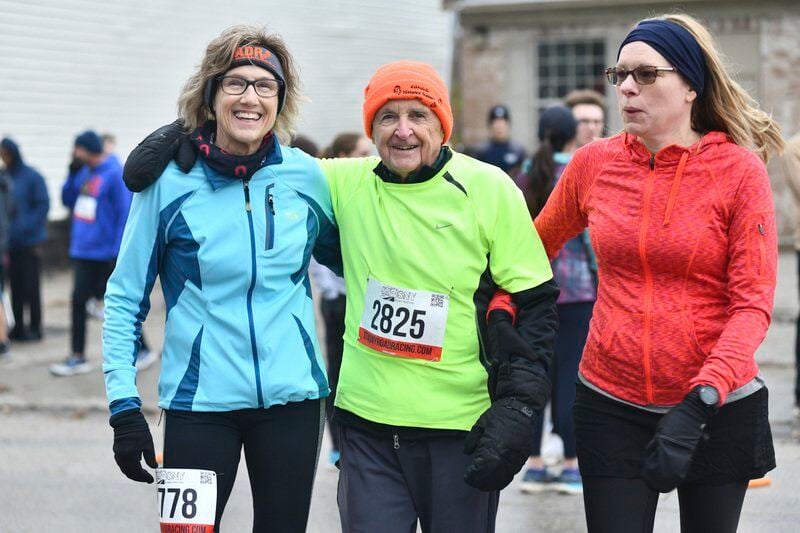 Don Gill, 89, of Ashtabula, is helped from the finish line of the Miracle Mile by Kathleen Pierce, left, and Dawn Cragon on Thursday morning in Ashtabula. 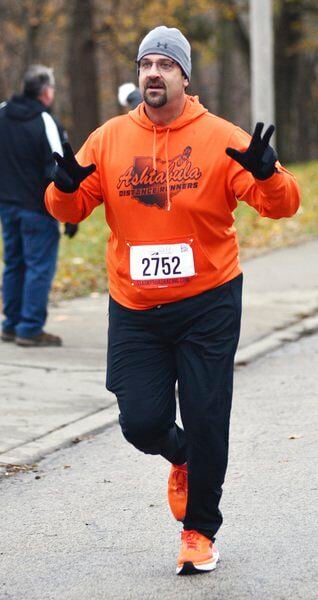 James Timonere heads for the finish line of the Miracle Mile on Thursday morning in Ashtabula.

Jake Ondash, right, and his girlfriend, Alyssa Thomas won the men’s and women’s divisions of the Miracle Mile on Thursday morning in Ashtabula.

Don Gill, 89, of Ashtabula, is helped from the finish line of the Miracle Mile by Kathleen Pierce, left, and Dawn Cragon on Thursday morning in Ashtabula.

James Timonere heads for the finish line of the Miracle Mile on Thursday morning in Ashtabula.

ASHTABULA — Family, tradition and helping others were the focus of nearly 200 people who participated in the Main Avenue Miracle Mile on Thanksgiving morning.

Jake Ondash continued his tradition of running a race every Thanksgiving, but brought his racing skills to Ashtabula County this year.

Ondash, a miler at the University of Akron, ran away with the men’s race with a time of 4:27 and his girlfriend Alyssa Thomas, also a distance runner UA, won the women’s race by a significant margin as well completing the mostly downhill course in a time of 5:05. Both bested a quality field of local runners.

He was in town for Thanksgiving with his grandparents Dean and Peggy McQuaide so the family took to the road together as many area families did to help the Samaritan House meet the needs of homeless people as the winter weather arrives in Ashtabula County.

Dean McQuaide was a long-term cross country, track and wrestling coach at Harbor High School and has been running area road races for more than 50 years.

Kim Ondash, Jake’s mother, and his brother, Josh also ran the race as did McQuaide. Many area families have made the Thanksgiving morning event a tradition.

Ondash has an extra year of track at UA due to the pandemic, and Thomas also has another year of eligibilty for outdoor track.

Both said they haven’t done much speed work as the indoor season doesn’t start for about a month.

He said he liked the downhill course with a short upgrade before a flat stretch to the finish along Main Avenue.

Thomas, who is more of a 5K, 10K runner in college, has only one season of outdoor track left to compete.

The miracle mile has been run as a fundraiser for the Samaritan House for more than two decades, but a Thanksgiving mile along Main Avenue occurred for a number of years in the 1970s said Don Gill, 89, who organized the race and ran on Thursday.

Executive Director Steve Sargent said canceling the race last year, due to the COVID-19 pandemic, was not a major problem for the organization because many of the normal sponsors

to the race still donated to the cause but something was missing.

“It is even better with all the people ... It is great to feel we are doing something to help someone less fortunate,” Sargent said. The profits from the race go to the general operating budget of the homeless shelter.

Sargent said expenses have escalated because fewer people can stay at the Samaritan House because of COVID-19 protocols.

He said numerous churches participated in the event and feels like a camaraderie exists between people because of the pandemic.

“I think we appreciate things a lot more,” Sargent said.

In the women’s division Lydia Randolph, an Edgewood High School graduate and freshman runner at Trine University, finished second with

a time of 5:27, followed by Edgewood graduates Kayla Bertholf with a time of 5:43 and Monica Hamalainen at 6:20, respectively.

GENEVA [emdash] Russell "Rusty" Lewis, 56, passed away January 16, 2022 at UH Geneva Medical Center. He was a loving dad, brother, grandpa, companion, uncle and friend. A celebration of life will be held at a later date.

SAYBROOK TOWNSHIP [emdash] Alan Howell, 58, passed on January 13, 2022. He leaves behind his brothers Dan and Mark as well as many dear friends. Services to celebrate Alan's life will be held at a later date. www.czupfuneral.com