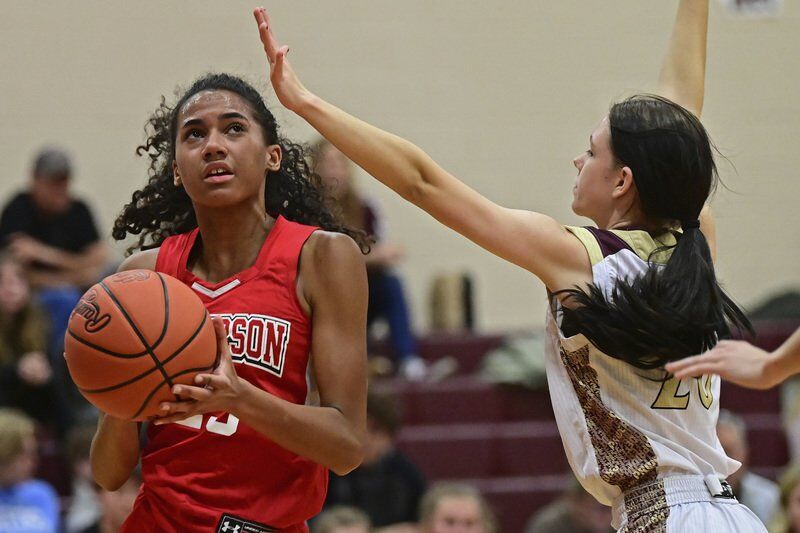 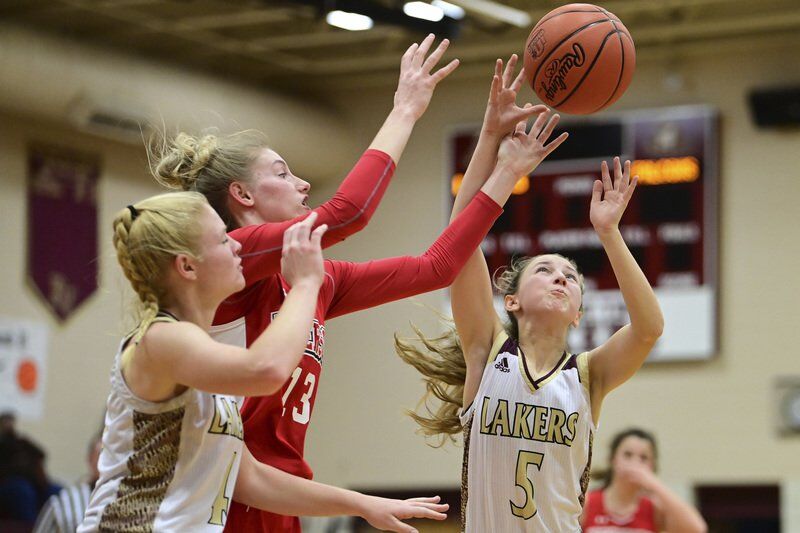 Jefferson’s Monica Devine, center, fights for a rebound with Zoey Painter (5) and Cassie Clute during the first half of a girls basketball game Friday night at PV High School. 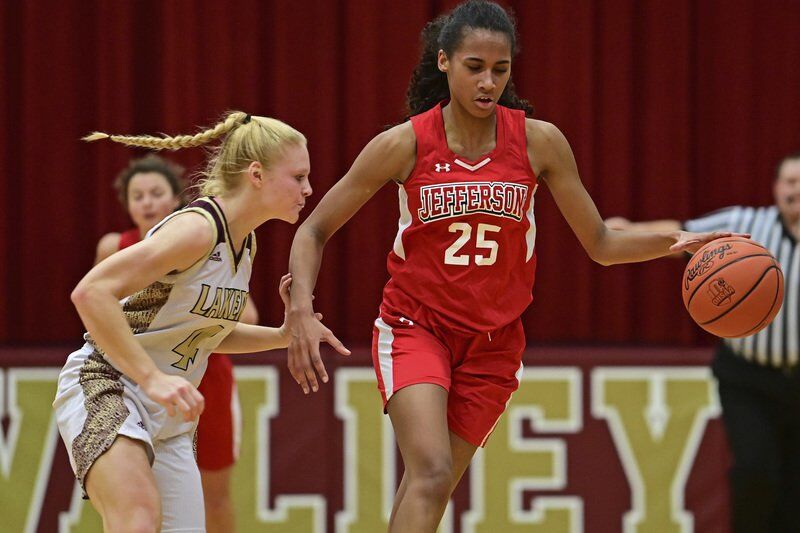 Jefferson's Taylor Skinner, right, dribbles up court while being pressured by Pymatuning Valley's Cassie Clute during the first half Friday night at PVHigh School.

Jefferson’s Monica Devine, center, fights for a rebound with Zoey Painter (5) and Cassie Clute during the first half of a girls basketball game Friday night at PV High School.

Jefferson's Taylor Skinner, right, dribbles up court while being pressured by Pymatuning Valley's Cassie Clute during the first half Friday night at PVHigh School.

ANDOVER — Tyrah Skinner put up a short with less than two minutes to go on Friday night. The shot went in and Jefferson girls basketball coach T.J. Furman immediately put his hands on his head and took a deep breath.

Skinner, along with the other veterans on roster, led the Falcons to a 46-39 win over Pymatuning Valley on the opening night of the season.

Skinner only scored four points. Her late-game basket wasn’t the deciding factor, but it helped the players get back into the right mindset before the final buzzer sounded.

The Falcons (1-0) led 40-36 with under a minute and a half to play. They were in the middle of a nearly four-minute scoring drought.

Furman wanted his team to hold the ball and force the Lakers (0-1) to foul. But after a couple tosses around the court, Skinner caught the ball near the free-throw line. She turned and sank the shot.

It wasn’t how Furman drew up the situation, but it got the job done.

“It was a big basket, but still, I think learning too … sometimes you gotta back out,” Furman said.

Skinner’s score forced the Lakers to play tighter on the next Jefferson possession and eventually start fouling to prolong the game.

The Lakers had a chance in the fourth quarter but they couldn’t capitalize on Jefferson’s offensive slump. After cutting the lead to 40-33 with 4:40 to play, PV went scoreless for two minutes. They committed three turnovers and missed a 3-pointer during the stretch.

“We sent them to the line too many times,” PV head coach Geena Gabriel said. “They went 10 for 18, we only went 6 for 13. And that’s our main thing, don’t put shooters on the free-throw line.”

The pair of Taylor Skinner and Devine looked like an experienced group Friday night. The two have started together for the past couple years, and that experience paid off when the Falcons needed big plays.

“This is their chance to take over,” Furman said. “We’ve been waiting for that growth, that maturity, and I think they did a good job with it.”

It was a different night for Tyrah Skinner. In previous seasons, she’s played as a reserve. But on Friday night, she got a starting spot alongside her sister.

It was a moment she couldn’t quite describe.

“It’s so great because I’ve always dreamed of playing with my big sister,” Tyrah Skinner said. “When you’re on the court, nothing else matters. Everything’s out of your brain. You’re just playing the game that you love.”

Jefferson is scheduled to play at Conneaut on Wednesday night.

PV is slated to host Windham on Nov. 29.