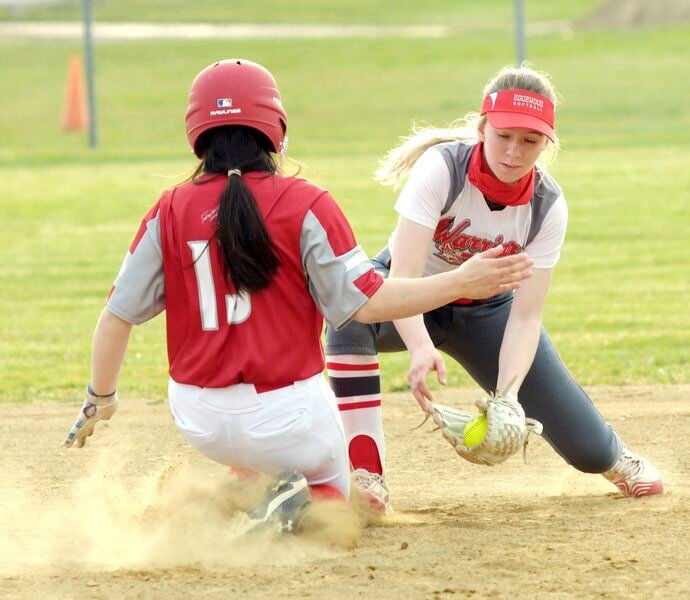 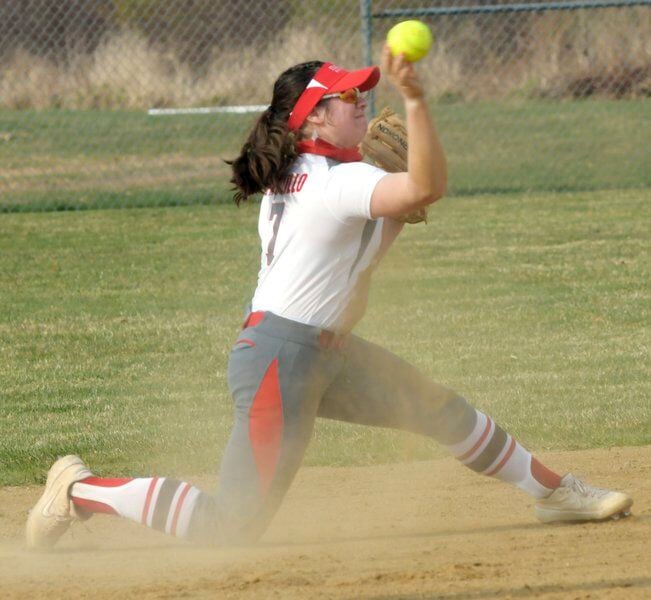 Edgewood's Sophia Paolillo throws from a knee after making a diving stop on Tuesday afternoon during a home game with Geneva. 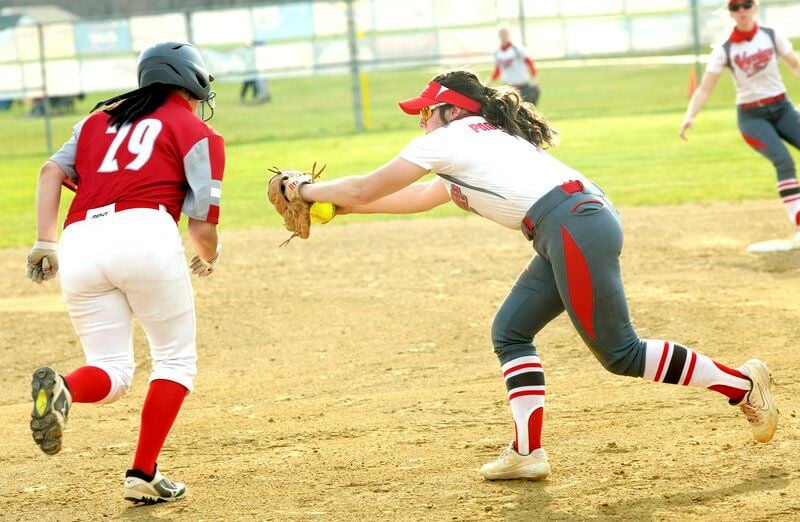 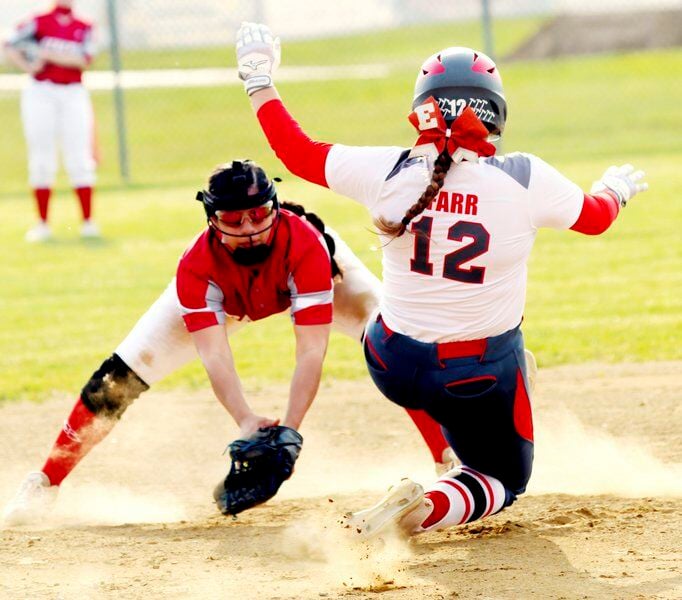 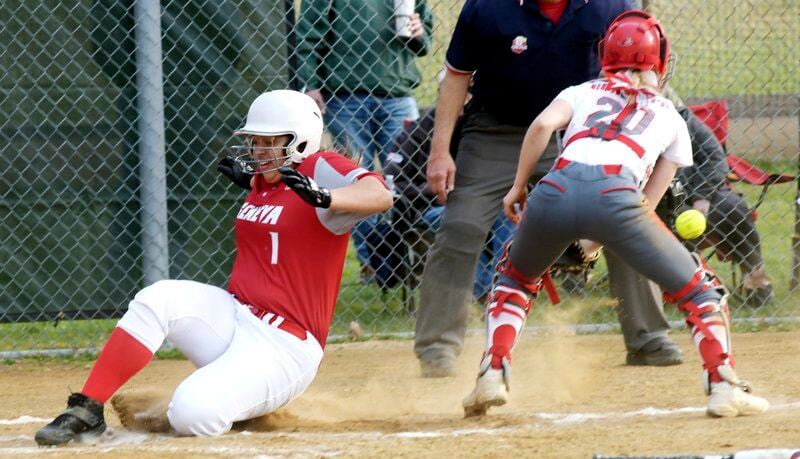 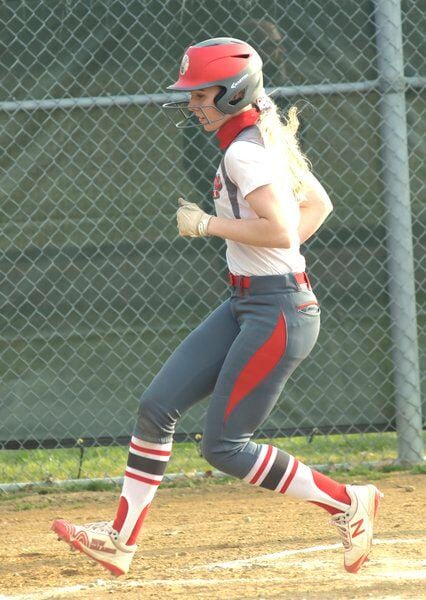 Edgewood's Julie Sloan scores on Tuesday afternoon during a home game against Geneva.

Edgewood's Sophia Paolillo throws from a knee after making a diving stop on Tuesday afternoon during a home game with Geneva.

Edgewood's Julie Sloan scores on Tuesday afternoon during a home game against Geneva.

ASHTABULA TOWNSHIP — Geneva’s Abby Stash stepped to the plate with two outs and the game tied, 7-7 in the top of the eighth inning with a runner on second during Tuesday’s game at Edgewood.

As the pitch approached, time slowed for the freshman. She looked the outside pitch into her bat and hit a hard line drive double to center field to drive in the run.

“I usually can’t hit outside that well,” Stash said. “It felt really good, especially because there was already two outs and we needed the hit.”

The Eagles added another run to secure a 9-7 win. Stash also recorded two of the final three outs from third base to help shut down a surging Warriors’ offense.

“Abby’s been solid for us this year,” Geneva coach Eleshia Pitcher said. “She’s a great third baseman. She’s only a freshman, and she’s been creaming the ball at the plate.”

Trailing 7-4 entering the bottom of the seventh inning with two outs and two on, it looked like Edgewood’s comeback would fall short. However, an errant throw to first base scored two runs easily. Julie Sloan rounded all the bases for the tying run as a throw to home plate was offline.

“We started capitalizing on little mistakes,” Edgewood coach Joel Laughlin said. “When we can capitalize on little mistakes you score a few runs. We squared the ball up, we got some big hits and everything started working our way.”

The Eagles (3-3) jumped out to a 4-0 lead following the first two innings.

An inside-the-park home run by Midaliz Alvarez in the first inning drove in two runs and a single to right field by Stash added two more runs in the second.

“[Yesterday] we left a lot of people stranded so we mixed the batting order up a little bit hoping to get some more runs across the plate,” Pitcher said. “We’ve been hitting the ball well. We just haven’t been pushing them across the plate.”

Edgewood cut the Eagles’ lead in half during the fourth inning. Sloan hit a triple to left field to drive in a run, and a sacrifice fly by Sara Drake scored Sloan.

For Edgewood, the late rally came up short, but proved its comeback capability. The Warriors dropped to 1-2 after the on the season.

“I hope they realize they’re still in every game,” Laughlin said. “We are a great team. This is a great team, and we’re just out of tune. Just not in tune yet, it’s an early season. With the whole COVID thing, we haven’t really had a chance to play together.”

For Geneva, not just the win, but the way it won in extra innings, could create momentum moving forward.

“I couldn’t be prouder of them right now,” Pitcher said. “The last couple games have been a little rough. They came out, put it together [and] stayed with it, even though we had a couple errors. They stayed with it, stuck it out and pulled it through.”