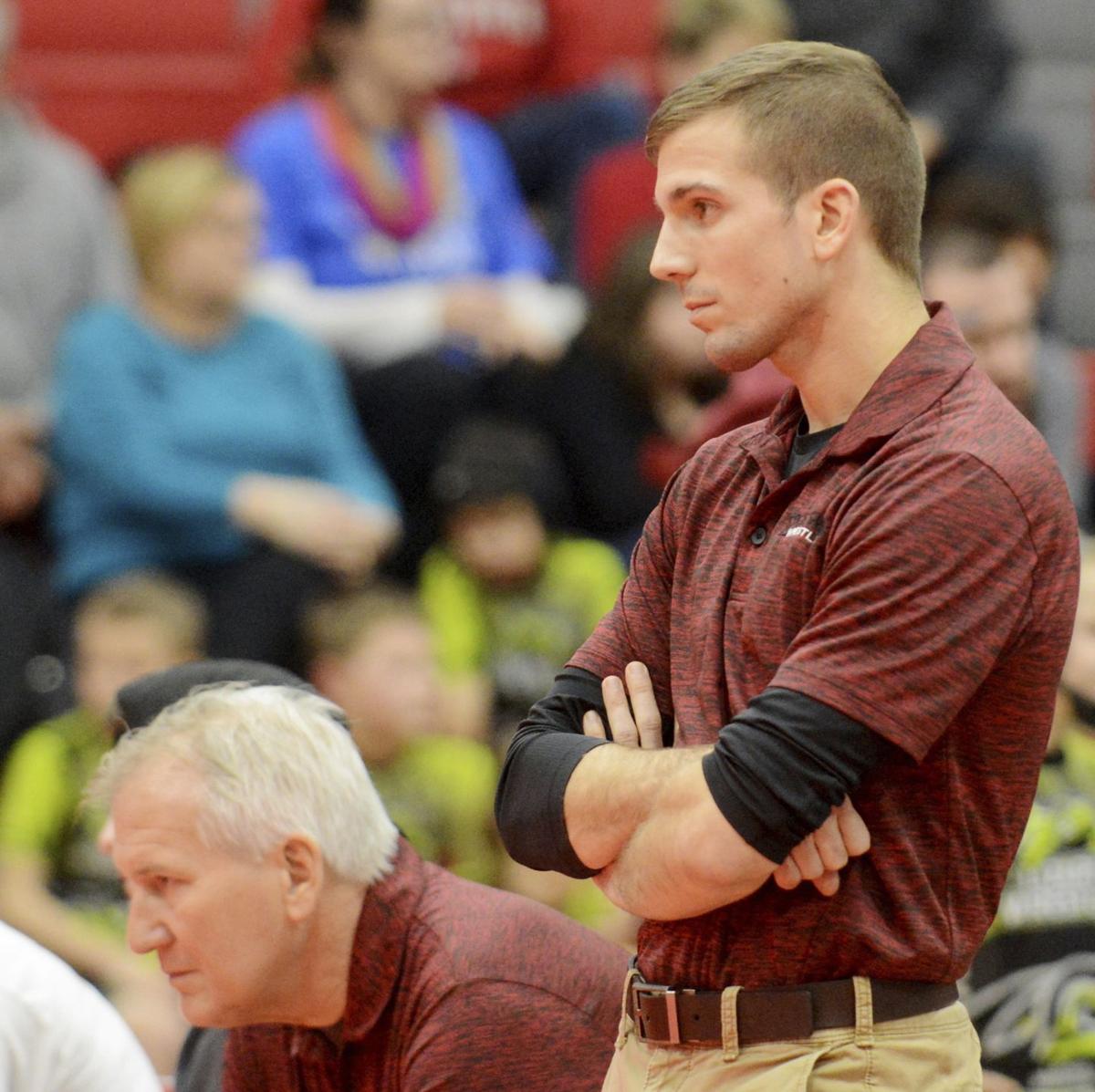 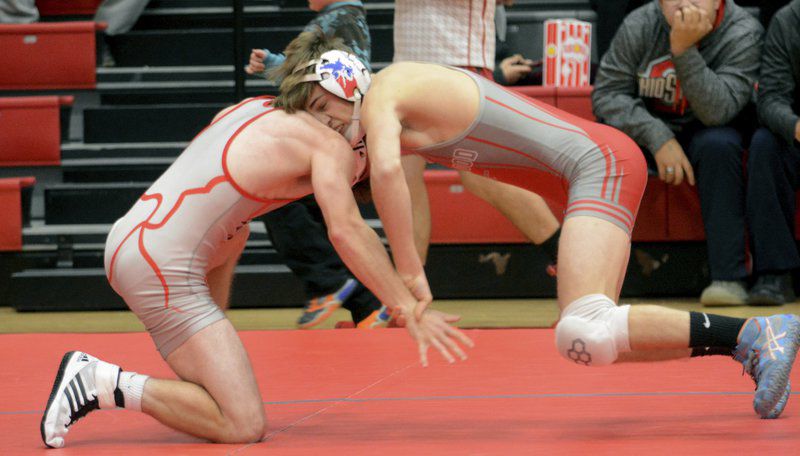 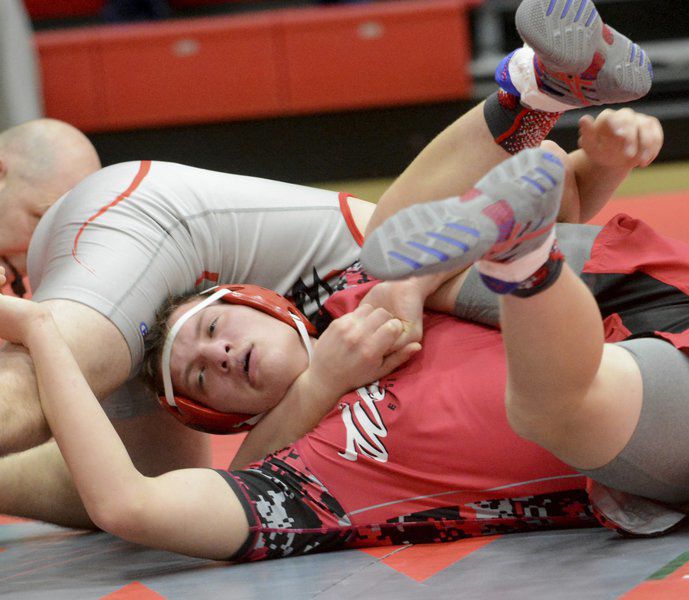 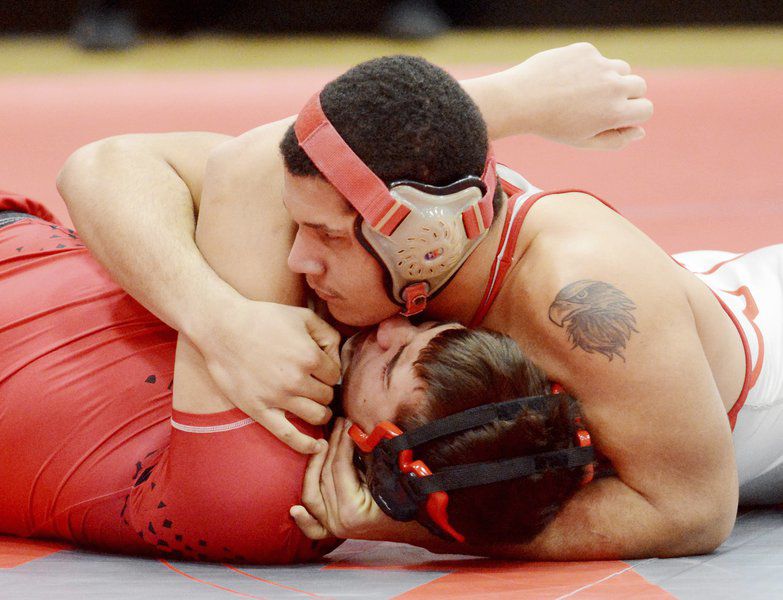 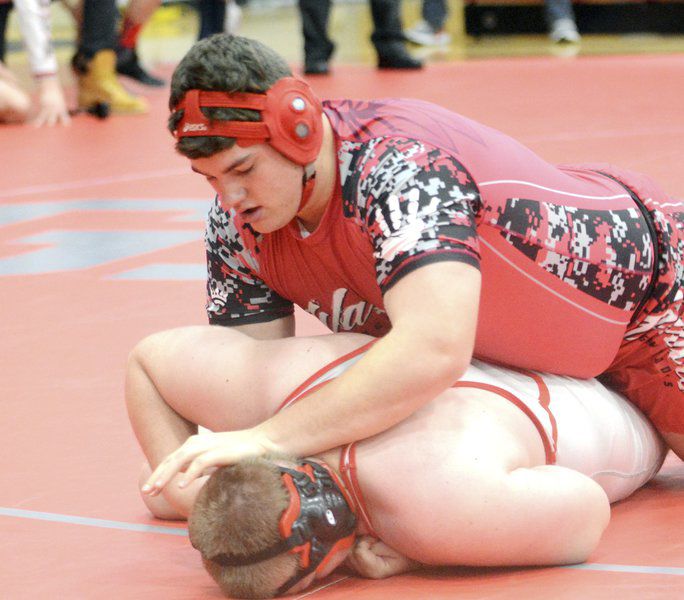 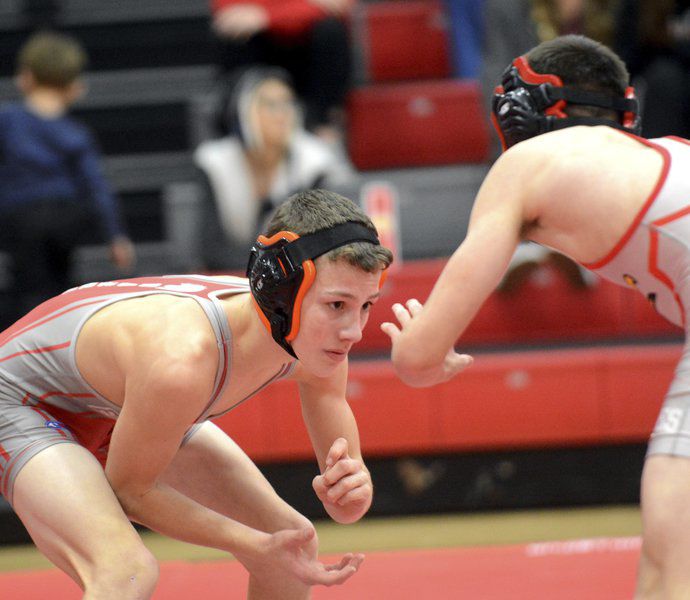 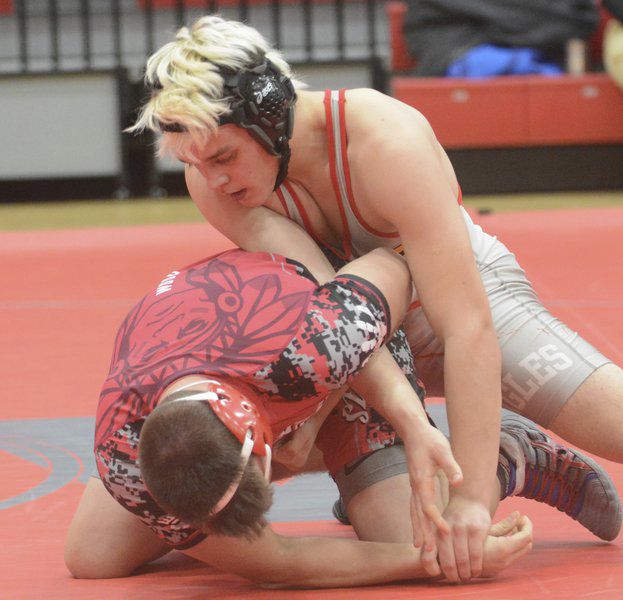 Geneva's Justin Berg (top), shown competing in a match earlier in the season, posted a win at 182 pounds against Pymatuning Valley on Thursday in a county dual at PV.

Geneva's Justin Berg (top), shown competing in a match earlier in the season, posted a win at 182 pounds against Pymatuning Valley on Thursday in a county dual at PV.

GENEVA — Geneva ran a six-match winning streak from 152 to 220 pounds and ended up defeating Edgewood 49-22 in a dual on Thursday night at Geneva High School.

Not only did the Eagles record a 6-0 mark during that time frame, they gained five pins and had a major decision in the Ashtabula County matchup.

Three Geneva wrestlers in the group — Braden Bilicic at 152 pounds, Caleb Selman 160 and Charles Taylor 220 — are a combined 49-3. Bilicic ran his record to 17-0 with a quick pin over Edgewood’s Drew Kister.

According to Bilicic, a senior and district qualifier a year ago, the talent the team has in the middle-upper weights makes for some pretty tough days after school in the wrestling room.

“It’s pretty tough,” Bilicic said. “From 152 to 182, we’re all wrestling each other. The conditioning, the wrestling, it’s all tough, but I love it and we’re winning so no one is complaining. I may stand out right now, but those guys make it tough on me everyday in practice.”

Bilicic needed just 28 seconds to start a string of three-straight pins by Geneva. Selman followed with a first-period slap of the mat, followed next by Cole Vennis with a second-period fall at 170.

“That’s a really solid section of our lineup,” Geneva coach Chris Stamper said. “Those guys are all doing really well this year.”

Overall, Geneva took eight of the 13 bouts wrestled in improving to 2-0 in duals. They also have a couple of first-place tournament finishes so far this season.

Stamper likes what he’s seen as they get set for a little Christmas time off now.

“We feel really good about where we’re at as a team right now,” Stamper said. “The main thing is we just need to keep working hard and stay healthy.”

For Edgewood, Garrett Webster at 285 earned one of two pins. Brandon Sandella at 120 picked up the other.

The Warriors’ lightweight duo of Kyle Biller at 106 and Joey Jafarace at 113 each posted decisions to continue their strong starts to the campaign.

Edgewood coach Gregory Stolfer said he knew what his team was in for going against the Eagles.

“They have a good team, they’re super solid,” Stolfer said. “One hundred six to heavyweight ... and that says a lot about not only the coaching staff but the athletes. They have a great sophomore, junior and senior class and they put in the work. And when you put in the work you’re gonna be successful.”

While Geneva has a strength from 152 up, Edgewood is having its best success at the lower weights. Biller and Jaraface are each at 7-1, while Sandella, just making his way back, is 2-0.

“Everybody wrestled well tonight,” Stolfer said. “It was Brandon’s second match back and he looked good. We still don’t know where people are going to end up at. We have a lot of young guys and Geneva is a great team to pick up experience against.”

Edgewood also received a major decision from Keith Ramsey at 145.

For Geneva, Johnny Wayslaw at 126 and Jesse McElroy at 132 also picked up wins.

Up next, Edgewood will head to Crestview Saturday for duals with the host school and Bellaire.

The Eagles are off until the Kenston Invitational Dec. 28 and 29.