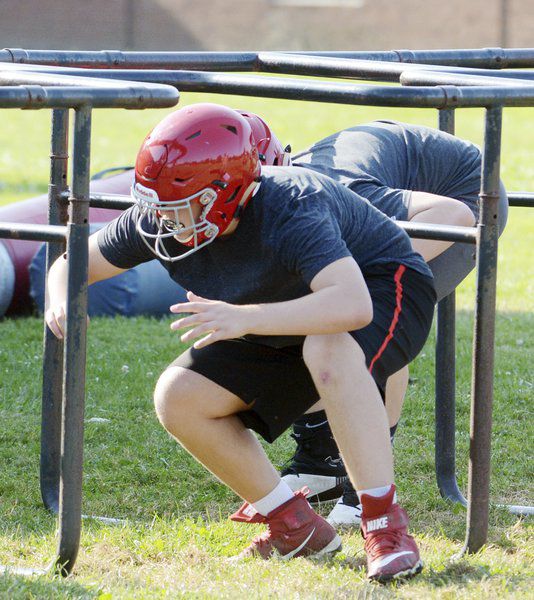 Edgewood lineman Kaleb Summers works on a drill during the first day of practice on Thursday evening. 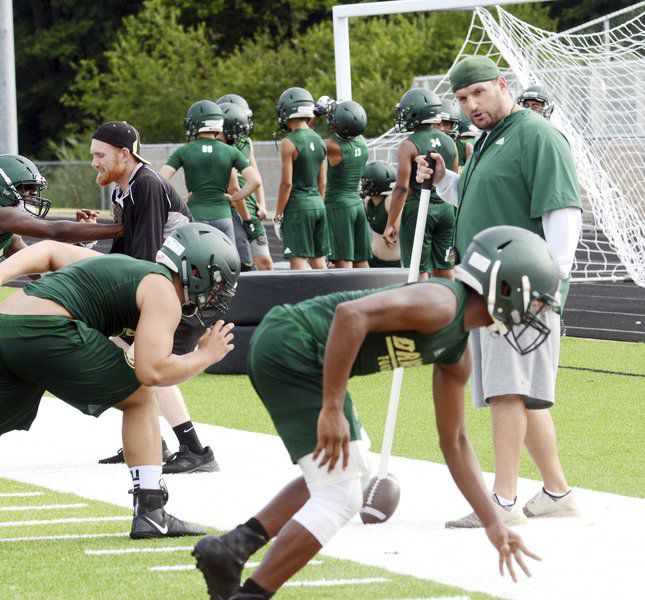 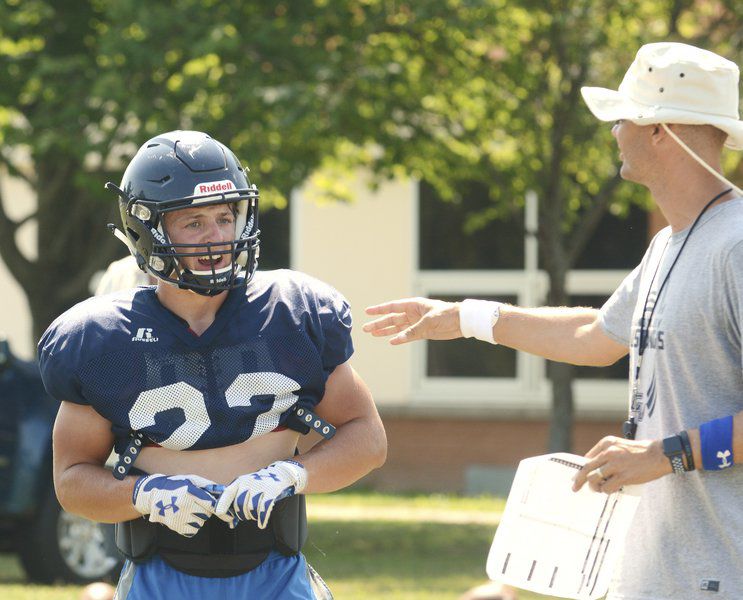 Edgewood lineman Kaleb Summers works on a drill during the first day of practice on Thursday evening.

GV enjoyed a lot of success in the Northeastern Athletic Conference. Edgewood and Lakeside faced their fair share of struggles in the All-American Conference.

All three schools are now entering the Chagrin Valley Conference with a different outlook.

Life will be different in the CVC.

The Mustangs will share a division with Beachwood, Berkshire, Wickliffe, Cardinal, Hawken and Kirtland. Beachwood is coming off a 6-4 season. Wickliffe has won at least eight games and clinched a playoff spot in each of the last three years.

Kirtland is an Ohio powerhouse that won its fourth state championship just one year ago.

“We’re excited about the move to the CVC,” first-year head coach Clint Nims said. “We know it’s going to be a little bit more of a challenge, but we’re up for the challenge. If it doesn't challenge you, it doesn't change you, so we’re looking forward to playing the Kirtlands, the Berkshires, the Cardinals and the Wickliffes.

"I mean some of those teams we played in the past, but now they're on our conference schedule, so we just think playing the tough teams is only going to make us better — better as a football team and better as people.”

“I’m really excited,” senior Gordon Seger said. “I think the CVC definitely has a lot better competition than we did in the NAC. I always want to play better teams. … All those teams that we played previously, that we’ve had close games with or been beaten by or even been able to win, those are the teams that I want to play against.”

The Dragons shared a division with Boardman, Austintown Fitch and Warren G. Harding in the AAC and collected an 0-9 conference record over the past three years. Lakeside was outscored 376-66 in those nine games.

Seven of the nine were decided by 30 or more points. One ended with Lakeside within one-possession — a 21-14 home loss to Boardman in 2016.

Since the start of the 2015 season, Lakeside has only faced one team that it will be sharing a division with this fall — Edgewood. The Dragons are 4-0 in those four meetings.

"The CVC is good football. The size of the schools is smaller, but the level of competition is not," Lakeside head coach Buzz Edwards said. "The perception is it gets easier and that is not true. … No one is going to take it easy on us.”

Unlike Edgewood and GV, Lakeside’s conference opponents are smaller than they were in the AAC, which could have a negative impact on the amount of playoff points the Dragons can receive. Lakeside is a Division II school for football.

Fitch, Boardman and Harding will all be Division II teams this year.

To compensate, Lakeside also added North, a Division II school, to the schedule and kept Madison.

“They’re in there working trying to make our program better every day and that’s where we’re at right now,” Lakeside Athletic Director Jason Baxter said. “We’re in that mindset. Obviously playoffs are always on the mind for us, you hope every football coach is thinking playoffs. But yeah, some of the teams that we’ll face are smaller, so we’re going to get less Level 1 points and some of the struggle might be in the Level 2. That’s why I wanted to schedule all Division II and I know Buzz wants to schedule all Division II non-conference.

“We just have to go and win and I think every football coach has that mindset — you win, then see where the dust settles in the end. because the points thing is so complex as it is. … You're always trying to find those games in the non-conference that can set you up to help you a little bit and that’s what I’ll continue to do. Where we’re at right now, we just need to get better as a program and then kind of let the winning lead us in whatever direction it will.”

The Warriors suffered winless conference records in 2016 and 2017 before breaking through for two victories last year. They were outscored 798-194 in 18 AAC contests since the start of the 2015 season.

“Our football numbers are up this year,” he said. “I think that's attributed to the fact and, no offense to Poland and Struthers and Niles, but they're bigger than us and no one really wants to go down there and get pounded and that’s what was happening to us. And that's not good for Poland, Hubbard, Niles and it’s not good for us either. So, I just think overall it’s a great step.”

Other than Lakeside, which is 6-1 against the Warriors since the start of the decade, Edgewood does not have much familiarity with its new division rivals. The only other CVC Chagrin Division team the Warriors have played since 2012 is Geneva, which has won two of three against Edgewood.

Edgewood head coach Jon Butchko echoed Edwards’ sentiments. He added that Edgewood will be playing teams with great histories, including Perry whose excellence goes back 20 years.

The Eagles are no strangers to the CVC, but they have been somewhat distant from other county schools in recent years. Geneva’s last matchup against a fellow Ashtabula County foe came in 2015 against Conneaut.

The Eagles will take on three county rivals this year — Edgewood and Lakeside, plus a non-conference contest with Jefferson.

“I love it, I'm so excited,” head coach Chip Sorber said. “I can't wait to go to Corlew Field. It’s beautiful and I haven't been there in years. I'm excited to play Lakeside. They're right down the road, our next door neighbor and we never play them. Jefferson’s our neighbor to the south. We never play them. And now we are.”

After an 0-3 start to the 2018 season, all non-conference games, the Eagles won four of their last seven and finished tied for second in the CVC.

They beat West Geauga, Harvey and Chagrin Falls, but lost to Perry and Orange.

“The CVC can be tough,” Sorber said. “West Geauga, they're going to come out and knock you in the mouth. Perry’s always going to be a war. Orange has been in the playoffs the last two years in a row. Chagrin, you never know about Chagrin. It’s going to be a competitive conference, for sure.

The first CVC matchup between county schools will be between Edgewood and Geneva on Sept. 27. Edgewood and GV are scheduled to face off in a non-conference game on Sept. 6.