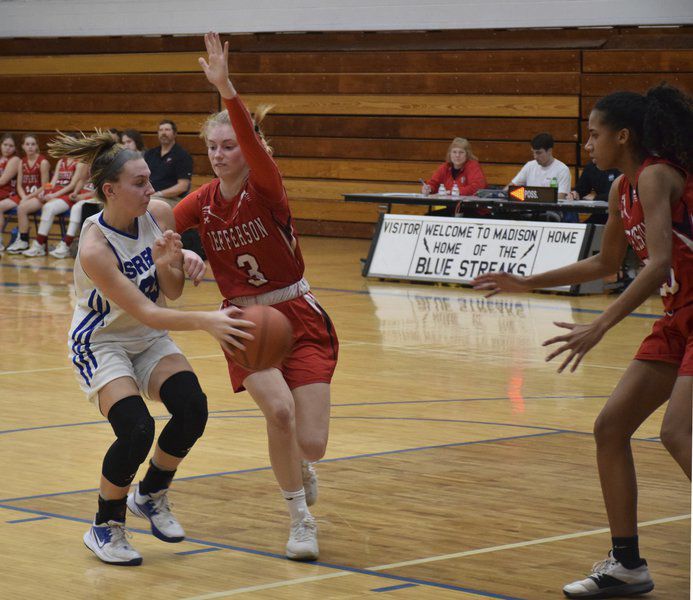 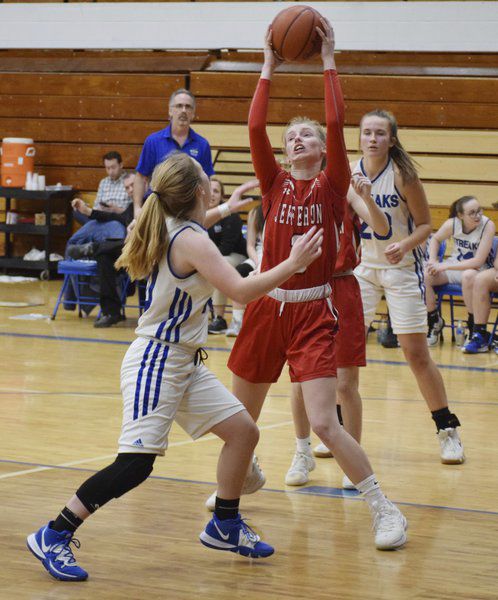 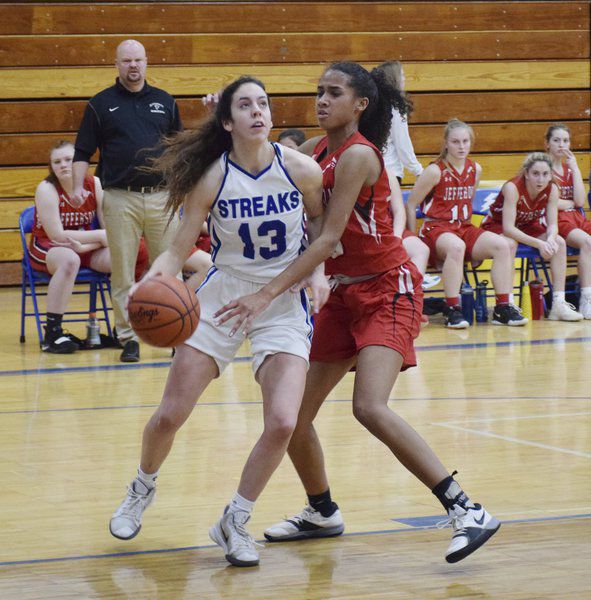 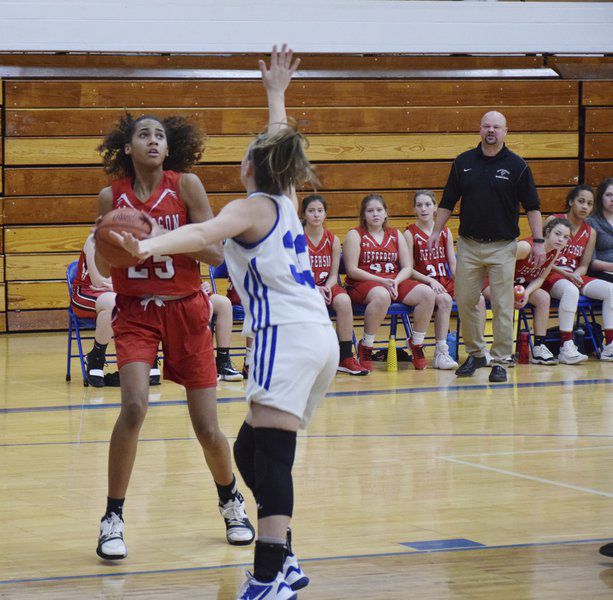 Jefferson's Taylor Skinner, left, pulls up for a shot while defended by Madison's Riley Montagner during a non-conference girls basketball game Wednesday night in Madison.

Jefferson's Taylor Skinner, left, pulls up for a shot while defended by Madison's Riley Montagner during a non-conference girls basketball game Wednesday night in Madison.

MADISON – With the postseason girls basketball tournament starting Saturday, Madison coach Tedd Wagner has a full complement of players back.

Sophomore Elizabeth Bottar, a letter-winner last season, recently returned to the lineup after being sidelined with a knee injury.

“She got us off to a great start,” Wagner said following the Blue Streaks 50-36 win over Jefferson on Wednesday night.

Bottar was one of five Madison players to score between seven and 14 points. She had eight points with six occurring in the first half.

Riley Montagner led the way with 14 points, including 12 in the first half.

“It’s a matter of finding a rhythm,” Wagner said. “We’ve had different lineups. It’s nice to have different options. I’d rather be at full strength than not.”

The Blue Streaks ended the regular season at 8-14.

“I think we’re feeling confident and ready,” Woleben said of entering the tournament.

Madison opens Division I play at home against Western Reserve Conference foe South at 1 p.m. Saturday. The Blue Streaks won both regular-season meetings — 58-49 on Jan. 4 and 71-63 on Feb. 1.

“We played two wars against them,” Wagner said. “When they [South] get hot, they’re hard to handle.”

Meanwhile, the Falcons dropped to 10-11. They open Division II sectional tournament action at home vs. Edgewood at 1 p.m. Saturday.

Despite the loss to Madison, Jefferson coach TJ Furman saw positives from his team.

“The biggest thing is growth,” he said. “I like that we fought back in the second half and came together as a team.”

In the first half, Madison built upon an 18-12 first-quarter lead.

The Blue Streaks outscored the visitors 15-4 in the second quarter to take a 33-16 halftime advantage.

“Our defense was off in the first quarter,” Woleben said. “We tightened up, pressured the ball and ran our offense.”

But after halftime, Jefferson found its groove, helped by a trapping half-court defense which created opportunities offensively.

The Falcons drew to within eight points two different times and ended up trailing 39-31 heading in the final period.

Madison, though, salted the game away with free throws. Lewanski hit 7 of 10 from the charity stripe for the game.

Monica Devine paced Jefferson with 12 points and Mullen tossed in 10, including two 3-pointers.

The Falcons also have one regular-season left, going against Northeast 8 Conference opponent South Range on Monday. The game was postponed on Feb. 6 due to weather.