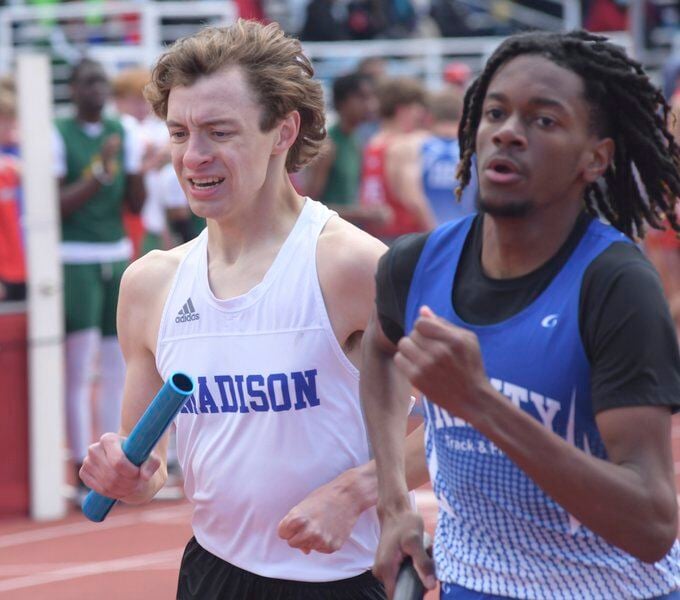 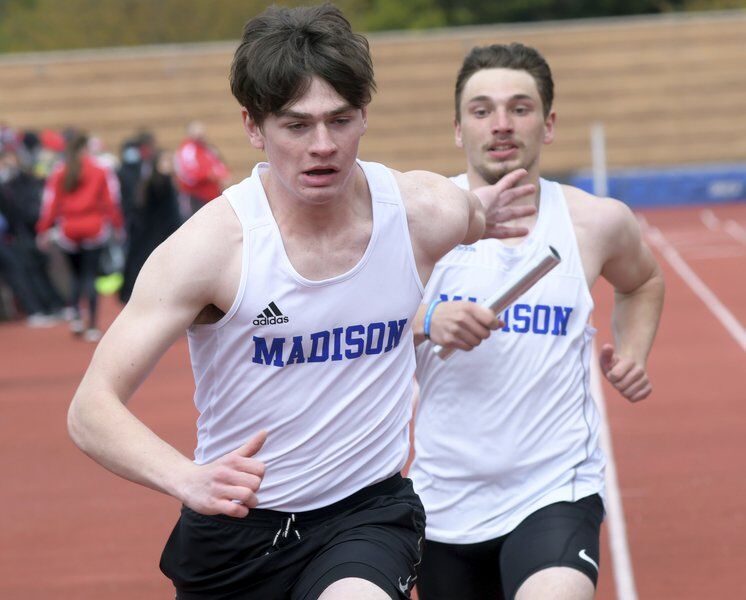 Madison's Carter Horvath, right, prepares to pass the baton to Ryan Crim during the 4x200-meter relay on Saturday during the Perry Gene Kobus Relays at Perry High School.

Madison's Carter Horvath, right, prepares to pass the baton to Ryan Crim during the 4x200-meter relay on Saturday during the Perry Gene Kobus Relays at Perry High School.

The Madison Blue Streak track and field coaching staff is dealing with fewer competitors after graduations and the pandemic decimated their teams this season.

coach Jeremy Verdi said participation is down about 25 percent from 2019, and he has had to adjust his mental outlook with results changing from being in the top of the standings to middle of the pack at area invitationals.

Verdi said he had a very strong team going into last year with a chance to win the league championship when the announcement came down that the season was done before it started.

The coach said he was devastated.

“I think I took it worse then the kids,” he said.

Verdi said he has a good 200 and 400-meter runner, a strong 110-meter hurdler and several good distance runners.

“We are building back up our field events,” Verdi said.

At the Perry Gene Kobus Relays Saturday, Dillon Miller placed second in the pole vault at 8-6.25.

Verdi said there was

no chance for the young

participants to ease their way into competitions this year because of the loss of the 2020 season and the fact that so many seniors graduated.

Madison girls coach Emily Daniels said she is happy with the development of her squad and has 41 participants this year.

“I’d say our strength are on the speed side of things,” she said.

“I have two really good throwers in the shot and discus,” she said.

On the track, the Blue Streaks received fourths from the 4x800 meter relay of Taylor Hennessey, Lilly Alcantar, Aubrey Sumrow and Madeline Otterman in a time of 11:17.90; Lexi Fleischer, Riley Meister, Laney Behm and Hennessey in the 800 sprint relay in a time of 2:02.70 4 and Sydney Chaffee in the pole vault at 7-6.