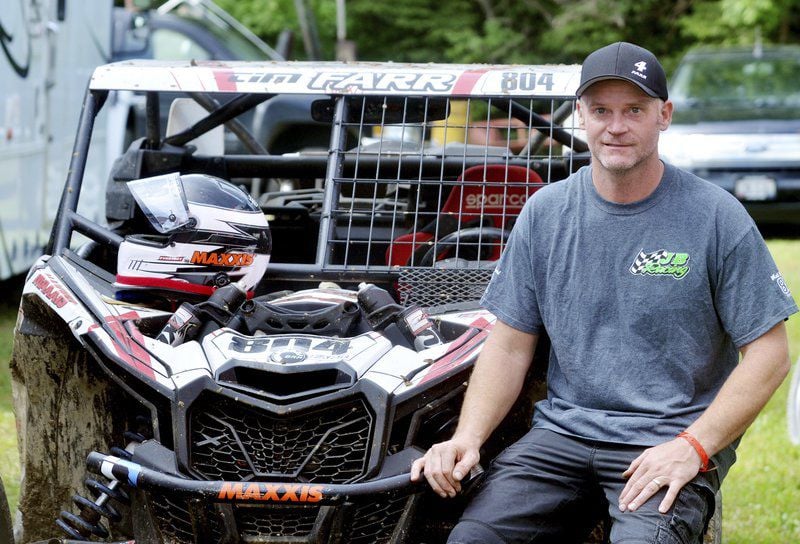 SHEFFIELD TOWNSHIP — The loud roar of all-terrain vehicle engines was heard on Saturday afternoon as hundreds of competitors revved up their engines in preparation for today’s feature races at Pine Lake Raceway.

Pine Lake Raceway has been the host of ATV races since 1969, said Bud Fischer, who owns the family track opened by his parents. The New East Extreme Dirt Track Racing Series hit Pine Lake Raceway on Saturday with heat races in order to place racers in line for today’s finals.

“I think we have just short of 400 entrants,” Fischer said while coordinating racers at the starting line on Saturday afternoon.

In addition to the dirt track, races some competitors will go “off road” on wooded trail racing this morning at 10 a.m., Fisher said.

“This is the biggest flat track ATV race in the country,” said Mike Blood who helps administer the race and helped his son Jacob compete on the race circuit for three years.

Blood said some of the ATVs competing this weekend cost between $20,000 to $25,000 to make them race ready. He said there are some classes that allow regular ATVs to race.

More than 30 different classes are to be competed this weekend.

Shawn Robinson of Pittsburgh runs the circuit, which started in 2014. He said the group took over the Pine Lake event in 2015.

Robinson said most of the racers are from the East Coast, but competitors from as far as North Dakota and California raced this weekend. Their age ranges from four years old to 60 years old.

Other stops on the tour include race sites in North Carolina, Michigan, New York and Pennsylvania. It also has a big following on social media, as it has collected 250,000 video views, Robinson said.

“We are trying to build the sport back up,” Robinson said.

One of today’s races will include long-time nationally renowned motorcyclist Tim Farr, who grew up in North Kingsville and graduated from Edgewood High School.

Farr ran a variety of motorcycle and ATV circuits during the last 30 years and is still racing full time at the age of 45. Farr won four national championships in the late 1990s and early 2000s and stopped racing professionally in 2007, but racing was still in his blood.

Farr had a lot of national sponsors when riding professionally and decided to go to a new style of racing in 2013. The Can-Am four-wheel vehicle is larger and has a roll bar with an engine that can get the vehicles running at 90 miles per hour, he said.

Farr comes back home for a weekend of reminiscing and tweaking his car.

“This is just for fun (but) we do a little testing,” he said.

Three decades of memories run together for Farr, who quit high school sports when he was in his mid-teens to devote time to his passion. Pine Lake Raceway has held a special place in his heart.

He said he didn’t think he would be able to continue his dream into his mid-40s.

Farr learned by experience and eventually worked closely with Mike Baldwin, a family friend and former racer. He still works with Baldwin, who runs a business in North Kingsville.