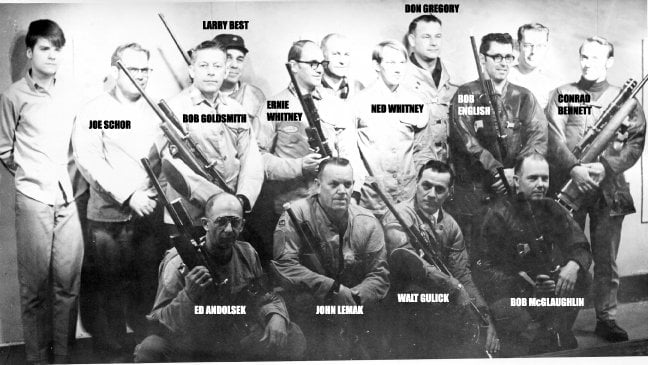 There’s nothing like a good mystery to pave the way toward a terrific story, topped perhaps only by coming up with a solution.

Back in January, I found two old black and white photographs in a file labeled, “Amboy Rifle Club.”

The photographs featured two groups of people — one featured a group of men, holding their rifles. The other featured a much larger group, all but a couple being youngsters.

Anyway, I printed the photographs as part of a Variety Store column in January with the caveat of asking if any Loyal Readers could provide some information and, even better, possibly some identifications.

Lo and behold, I struck gold, so to speak, in the form of Dave Greer and Joe Simak.

“The top picture is of the team at the time — my guess, early 1960s,” Greer wrote, then providing all but a few IDs of the men in the photo.

“The bottom picture is a hunter safety class from the mid-1960s,” he continued. “The teacher in the back row at the far left is Pete Graham. The helper at the far right is Bill Patacky.”

Simak came through with some help on the photograph of the Amboy squad of shooters.

“I’m quite sure I know two of the people in the photo — Joe Schor and John Lemack — they are both deceased,” he wrote. “I don’t know if this is of any help to you, but I thought I’d send it.”

Turns out, Greer has quite a connection to the Amboy Rifle Club, which was founded in 1930, according to none other than the esteemed R.D. Best.

“My great grandfather and great uncle founded the Amboy Rifle Club, which started at the southwest corner of Amboy Road and Route 20,” he wrote. “It was in a car garage by great uncle ran.”

Oh, by the way, here’s the really neat aspect of receiving the correspondences from David and Joe.

Before he finished his message, Greer threw in what is the really neat aspect of finding these photographs, running them in print and asking for information and/or identifications.

“(In the hunter safety class photo), I am the fourth kid from the left, kneeling,” he wrote.

Mystery solved, with a twist!

McCormack is the sports editor of the Star Beacon. Reach him at donmac@suite224.net.

Lawrence Wires, 70, died July 26, 2021. In keeping with his wishes, private family services were observed. Memorials in his memory may be given to the Ashtabula Feed Our Vets. Online guestbook and condolences available at www.thompsonsmithnesbitt.com