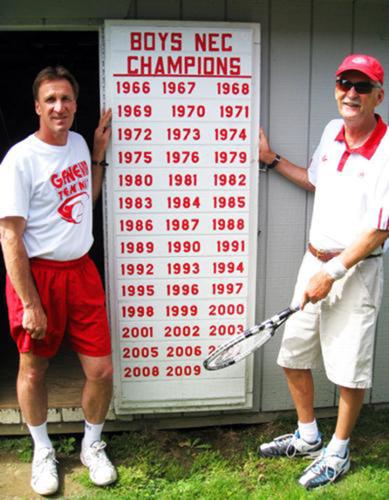 FILE PHOTO — In this photo from 2011, Arnie Bradshaw, right, poses with Phil Dubsky, who replaced Bradshaw as head coach, with a list of the school's boys conference team champions. 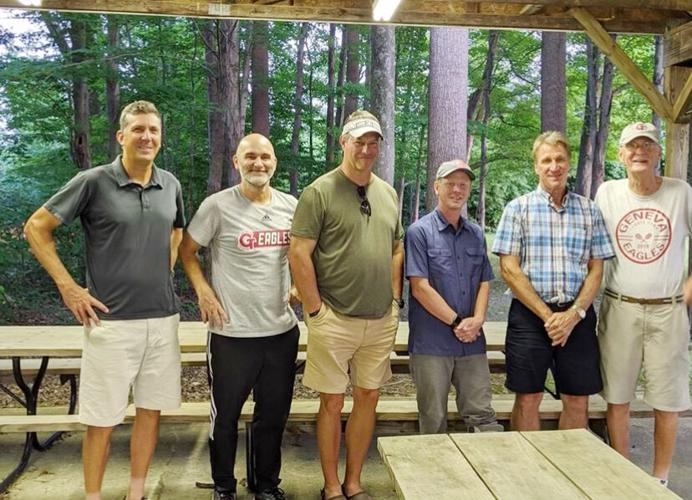 FILE PHOTO — In this photo from 2011, Arnie Bradshaw, right, poses with Phil Dubsky, who replaced Bradshaw as head coach, with a list of the school's boys conference team champions.

“Geneva only had two tennis courts, so I started hitting the ball against the wall,” the Geneva tennis player and graduate said. “He stopped and helped, I thought God was helping me.

“He would stop by once a week.”

Dubsky’s story is synomous with the many others shared about Bradshaw, Geneva’s legendary tennis coach, who died over the weekend.

He played tennis his junior and senior seasons, qualifying to state his senior year in 1959.

Bradshaw attended Edinboro State College in Pennsylvania and went undefeated, at 40-0, in tennis. He graduated in 1963.

Bradshaw was inducted into the Ohio Tennis Coaches’ Association Hall of Fame in 1994.

In the first 10 years of the program, Geneva’s boys team lost just two matches. The program has accrued 48 conference titles since 1966.

On the girls side, the Eagles have gained 16 conference championships in 22 title opportunities.

The lasting legacy and knowledge Bradshaw shared with his former players and coaches is evident today.

“Next to my wife, [Suzanne Aiken Shannon] and parents, [John Robert and Judy Shannon), he was the most influential person in my life,” said Geneva graduate and tennis player Shawn Shannon. “He opened his arms so much for me and my family.”

Shannon said, when he was in the service in 1982 stationed in Germany, he received a christmas card from Bradshaw.

“He was a special person,” Shannon said.

Tennis was Bradshaw’s main sport for coaching, but he also tried his hand at another — basketball.

“My first situation meeting him was in 1974,” said Doug Ellis, a Geneva graduate. “He was our seventh-grade basketball coach.

“I hadn’t realized that was his first year of coaching basketball. We went 17-0 and won a championship.”

“He reached out to resources he trusted,” Ellis said. “He was so prepared and confident in what he was doing. He’s truly the finest man I’ve ever known. The impact he had on me is so deep.”

Ellis also played tennis and still has the first racquet he received from Bradshaw at age 13, after that basketball season.

“He taught us the way we moved on a basketball court is the same as tennis, and told me that I could get to most balls,” Ellis said. “He told me to just get your racquet on the ball and we will refine the mechanics. He was so supportive and positive, he sold me on tennis.”

“We were acting up on the bus coming home from a game,” Ellis said. “The next day we ran and ran. When it was over, the grudge was gone.”

“Everybody has a role and no role is more important,” Ellis said.

“Even 30 years after his retirement, he was a vital part of the program,” Torok said. “I learned so much from him. He was always supportive. I would tell him, I’m just trying to keep the torch lit.”

Although he was a long-time part of the Geneva tennis community, Bradshaw’s impact with the sport stretched to other parts of the county and beyond.

“Over the last decade, I would pick his brain and we learned from each other.”

“The game has changed,” Nassief said. “And coach Bradshaw knew the modern game as well as anyone.”

“The first thing when you’re coaching is you want people to enjoy themselves,” Nassief said. “You want to be organized, efficient and encouraging.”

Nassief said Bradshaw even visited him a week ago.

“He was still giving me handouts, passing on his knowledge, thinking of others,” Nassief said.

He talked to and guided former players in the tennis community and beyond about family, life situations, coaching and helped those in need.

“I’m deeply saddened by his passing,” said Dubsky, who was Geneva’s boys head coach from 2000-15. “It’s a great loss for the Geneva tennis community past, present and future.

“The number of lives he impacted positively is incalculable.”

Bradshaw’s legacy, though, will continue.

The courts at Geneva are officially being renamed Bradshaw Courts during the weekend of July 8-10.

A new sign will be unveiled and other events are scheduled.