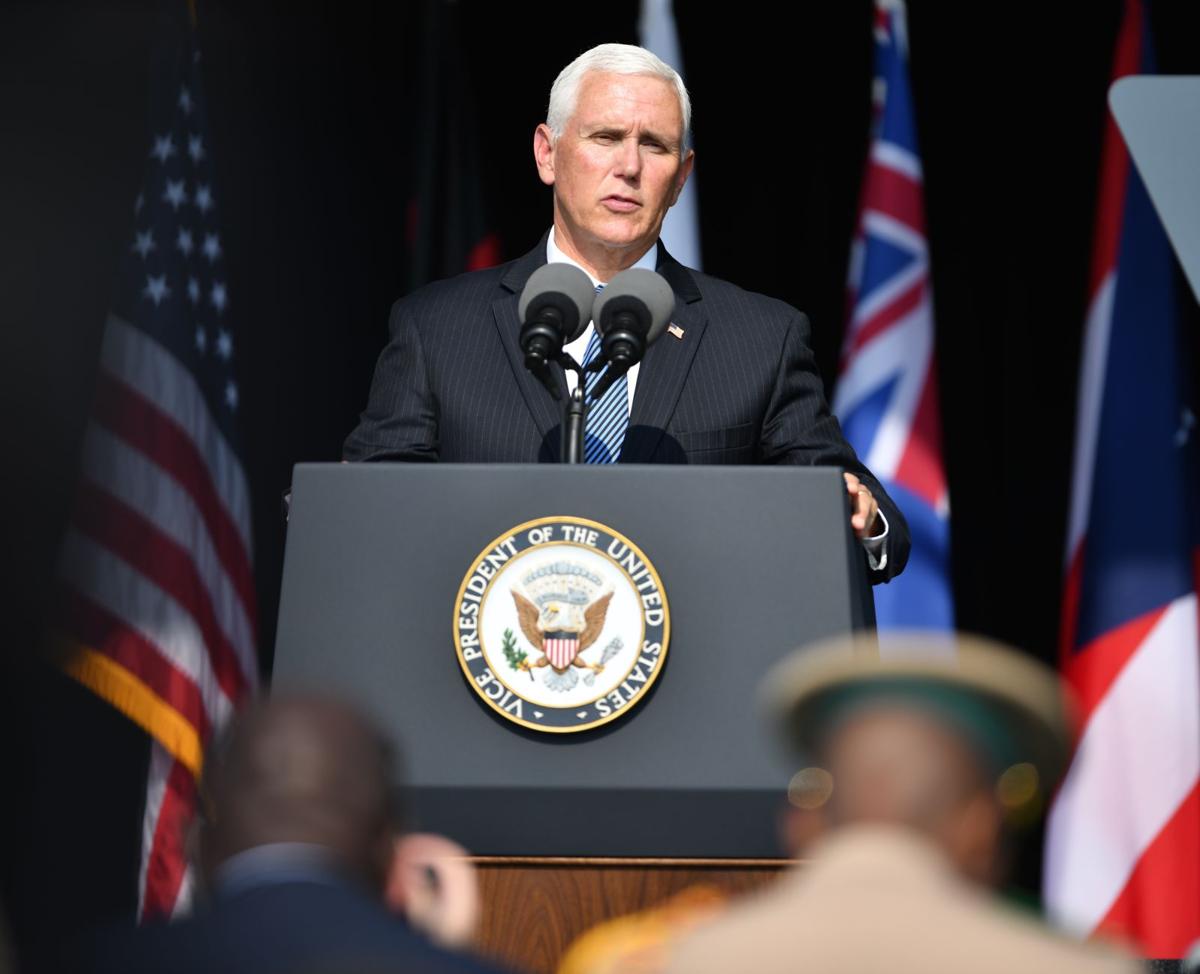 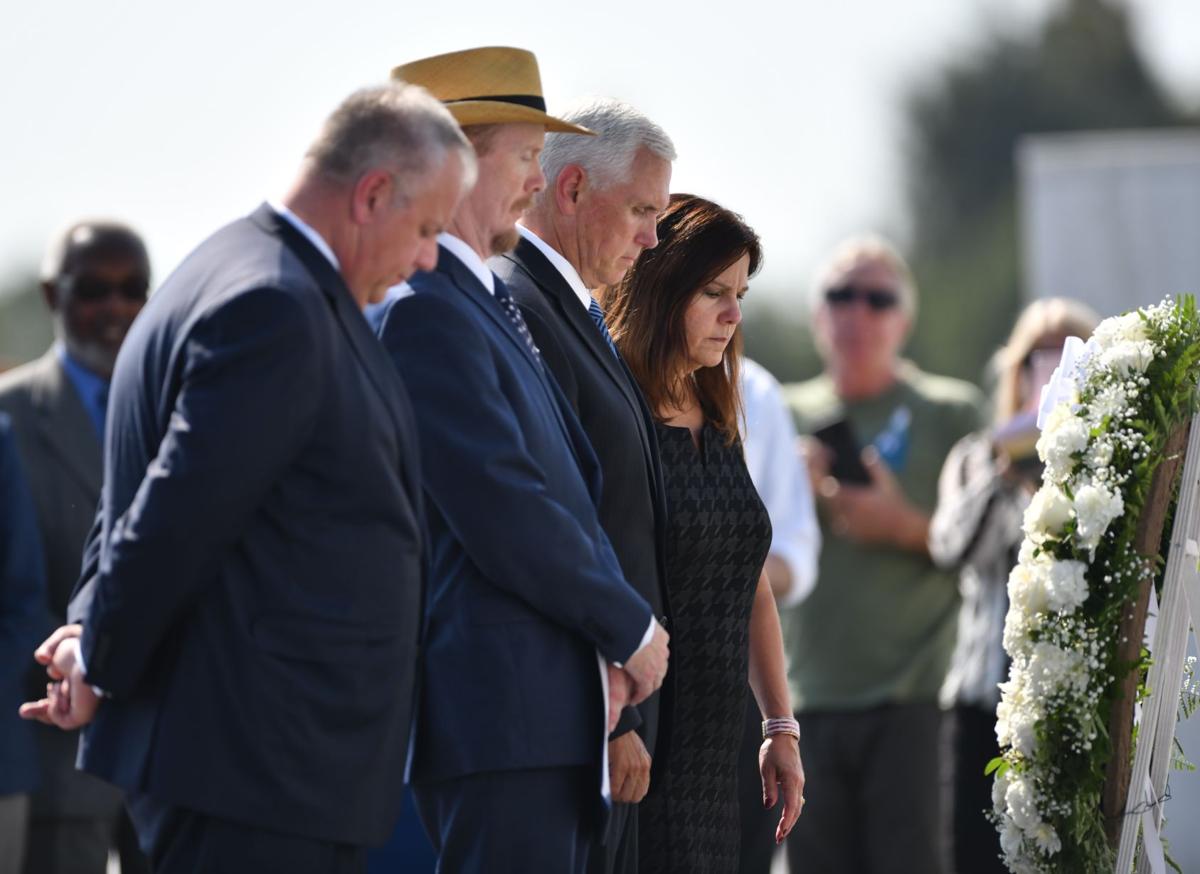 Laying a wreath during a remembrance ceremony on Wednesday, Sept. 11, 2019, at the Flight 93 National Memorial's Wall of Names in Shanksville, Pa., are (from left) David Bernhardt, Secretary of the Interior; Gordon Felt, president of Families of Flight 93; and Vice President Mike Pence and his wife, Karen.

Laying a wreath during a remembrance ceremony on Wednesday, Sept. 11, 2019, at the Flight 93 National Memorial's Wall of Names in Shanksville, Pa., are (from left) David Bernhardt, Secretary of the Interior; Gordon Felt, president of Families of Flight 93; and Vice President Mike Pence and his wife, Karen.

SHANKSVILLE – Flight 93's ordinary-turned-extraordinary heroes lit the way for a generation who followed them in the global war on terror 18 years ago, Vice President Mike Pence said Wednesday.

The nation owes them a "debt of honor" to ensure their story of strength of selflessness lives on forever, Pence told their families during an anniversary observance of 9/11 at the Flight 93 National Memorial.

"We must never forget and never fail to honor the memory of those who were lost here, in New York City and in Washington, D.C.," Pence said, addressing a crowd of more than 700 people near Shanksville.

"Here, at this memorial, the names of those 40 men and women are etched in marble," he said. "But I want to assure their precious families, they're also carved into the precious hearts and memory of the American people."

Wednesday marked the second time in three years the Flight 93 anniversary observance's keynote address was delivered by Pence, who was at the U.S. Capitol – a likely target for the hijacked plane – the morning of the 9/11 attacks.

Much of his approximately 25-minute speech focused on paying tribute to Flight 93's passengers and crew – "citizen soldiers" who became the the first to stand up against terrorism – and the county's continued resolve to finish a battle that Pence said started "here in the skies above these fields."

"We did not start this war. We did not seek it," he said. "But in every year that's passed, our armed forces have taken the fight to the enemy on our terms, on their soil."

On Saturday, Trump tweeted that he cancelled the meeting plan in response to a deadly Kabul bombing by the Taliban, a militant group which harbored 9/11 plotters in 2001. But the president has received criticism from lawmakers on both parties since, during a week in which Trump dismissed his national security adviser.

Pence did not mention Trump's scrapped plan for peace talks during his speech.

He cited recent Armed Forces victories in the Middle East and told the crowd that "the threat of terrorism remains."

"And I can assure you, under this commander-in-chief, our armed forces will never relent until the earth is purged of the scourge of radical Islamic terrorism," Pence said.

Like hundreds of fellow lawmakers, Pence was in Washington on Sept. 11, 2001 when he received word that United Flight 93 had changed course and appeared to be heading toward the U.S. Capitol – the likely third target of the terrorists' plot after the Pentagon and the World Trade Center towers.

"For us and our family, it's personal," he said. "I will always believe that I and many others in our nation's capital were able to go home that day and hug our families because of the courage and selflessness of your families."

Those words resonated with Spirit Airlines Captain Ron Rooks as he exited the park's Memorial Plaza on Wednesday.

"When he mentioned the fact that those 40 made it possible for him to go home that day, it touched me," said Rooks, an Orlando, Florida, pilot who made his first trip to the Flight 93 National Memorial on Wednesday. "It's just remarkable."

Nearby, Pence and his wife, Karen, placed a wreath at the memorial's white marble Wall of Names before departing the park.

Wednesday's Somerset County observance was one of three held at the nation's 9/11 memorials.

Trump spoke at the Pentagon and, separately, a crowd of thousands gathered at Lower Manhatttan's Ground Zero in New York City.

Pence flew into the John Murtha Cambria County Airport and was escorted to and from Somerset County under tight security – with federal agents providing staged inside the Flight 93 National Memorial and state police swarming the area outside it.

Wednesday marked at least the fourth time Pence has visited the Cambria-Somerset region – including his two stops as the Flight 93 anniversary observance's keynote speaker.

Pence said his family visited the memorial site in 2002, during his days in Congress. He also toured JWF Industries in 2016 while he and Trump were still campaigning for their eventual White House victory.

Bells of Remembrance at Flight 93

Paying a nation's debt of honor

Several hundred people gathered on Wednesday at Flight 93 National Memorial near Shanksville to mark the 18th anniversary of the Sept. 11, 2001, terrorist attacks and the crash of United Flight 93.