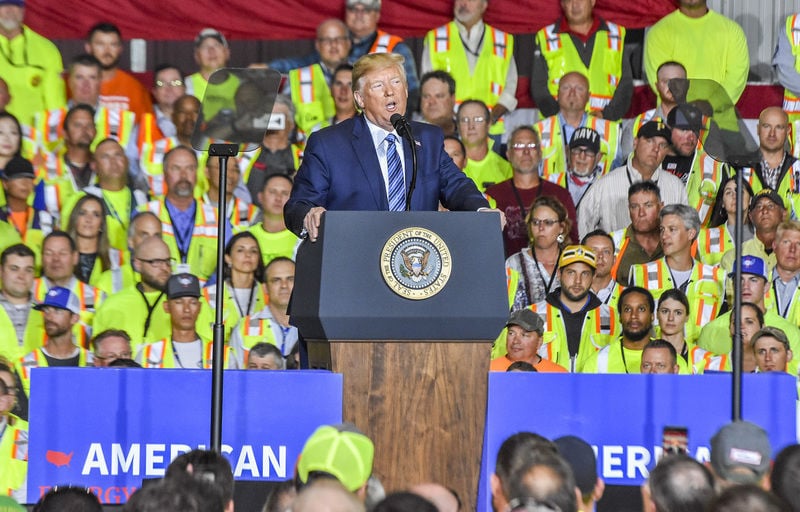 President Donald J. Trump speaks to a crowd of employees of the new Cracker Plant in Potter Township, Tuesday afternoon. 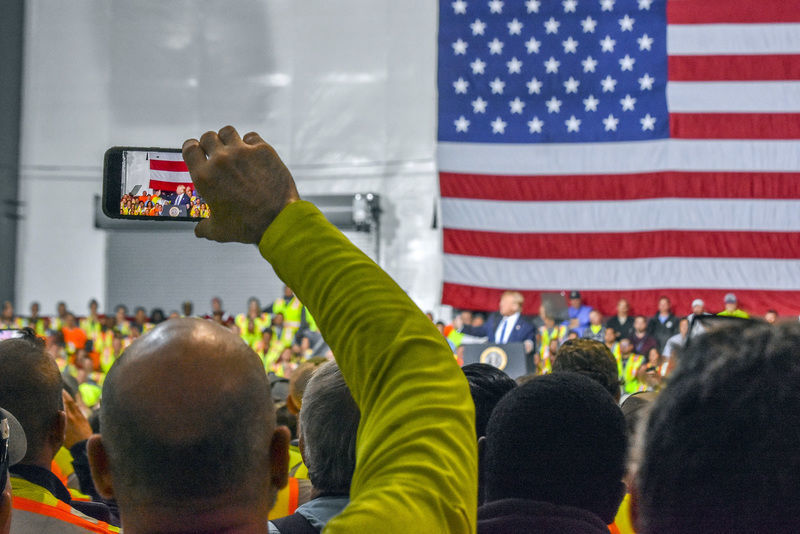 An worker building the Shell cracker plant in Beaver County records President Donald J. Trump with his phone as he addresses the crowd during a visit Tuesday afternoon. 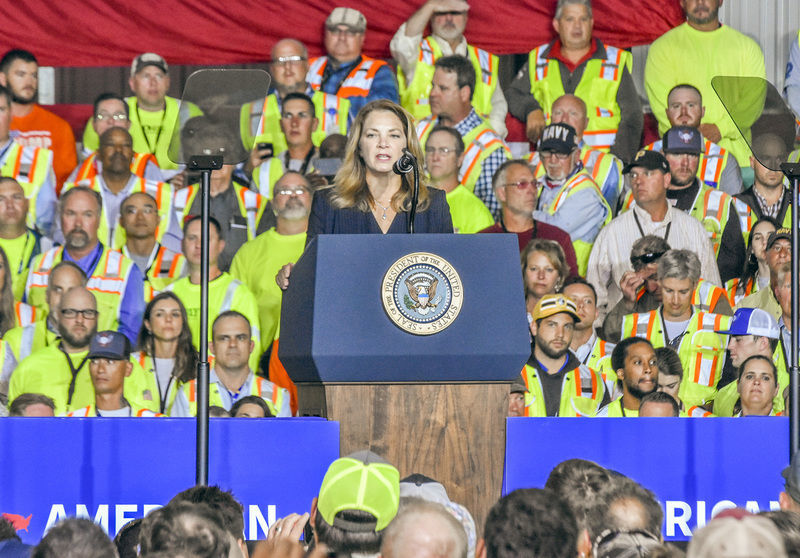 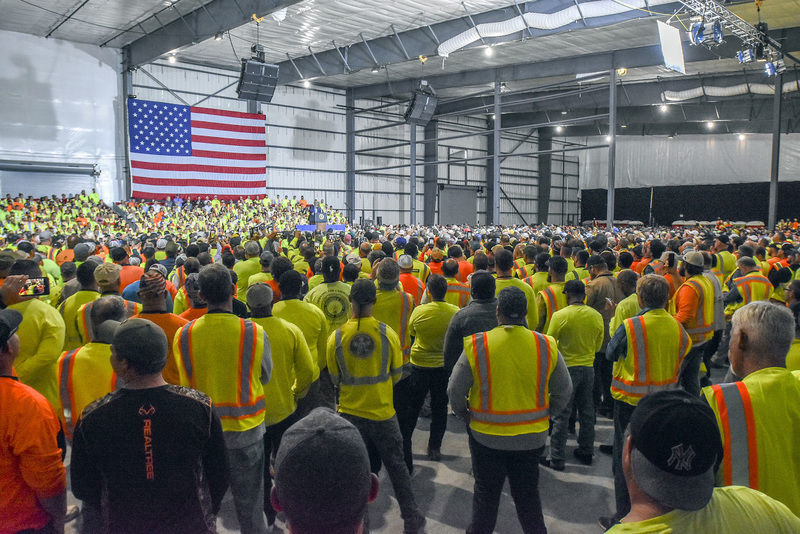 Thousands of cracker plant employees stand and listen to President Donald J. Trump as he visited the plant in Potter Township, Tuesday afternoon. 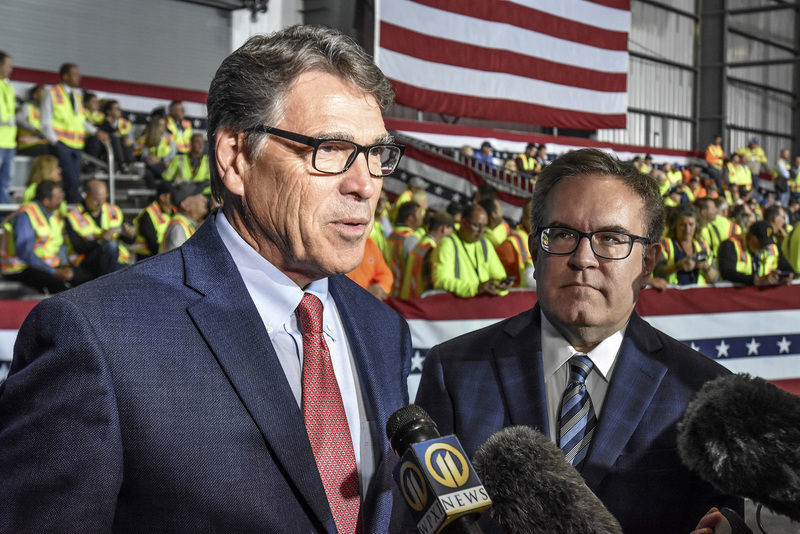 POTTER TOWNSHIP, Beaver County — President Donald Trump told about 5,000 employees building the petrochemical facility in Beaver County that they were “sitting on gold” during a speech given near the plant Tuesday.

The president’s remark referred to reservoirs of shale natural gas in Beaver County and throughout the Appalachian region that Trump said account for about a third of the country’s natural gas supply. The $6 billion petrochemical facility, scheduled to open in early 2020, will use natural gas harvested from the region to produce plastics for manufacturing.

“You’ve never had anyone that wanted to take advantage of (the natural gas),” Trump said. “But you’re sitting on gold, and your future has never looked brighter or better.”

Trump was scheduled to tour the plant after giving his remarks, but the president was clearly impressed by his first in-person glance at the more than 300-acre industrial worksite, which includes the second largest land-based crane in the world, capable of lifting up to 5,000 tons.

“This area used to be in bad shape,” he said. “Now you look outside and it’s like the eighth wonder of the world.”

Michael Marr, Shell Pennsylvania’s external relations director, said the plant currently employs just more than 5,000 employees — 60 percent of whom are local — and will max out at about 6,000 during the construction phase. Roughly 600 employees will remain in full-time positions when the plant’s operations begin.

Trump invited three workers on stage to speak about the impact the plant has had on their lives, including one man whose family has worked at that location for generations. The site was formerly a zinc smelting operation.

"I'm very proud to be a part of (the company's effort) to redevelop this site and create jobs in Western Pennsylvania for all of you," Jason Eckhart said.

Trump made a point to name the various types of workers in the audience, comments that were met by yells and applause from each group, including plumbers and iron workers.

The president said similar investments to the petrochemical plant could bring up to 100,000 new jobs to the region in the future.

“And it’s all fueled by the greatest treasure on the planet,” he said. “American energy.”

Trump referenced the "enormous success" Pennsylvania has had since tapping into its energy reserve, as opposed to decisions made by officials in neighboring states.

"As a result, families in Pennsylvania shale country got more jobs, billions of dollars in royalty payments, and wages are significantly higher compared to their neighbors just across the state line," he said.

The petrochemical facility, also known as a “cracker plant,” imports natural gas harvested by hydraulic fracturing wells throughout the region. The gas is delivered to the facility as ethane gas before it is processed into rice-sized plastic pellets.

Like many elected officials in the region, Lawrence County Commissioner Dan Vogler saw a potential economic boost from the under-construction ethane cracker plant in Beaver County.

The plant will run solely on natural gas, which Marr said runs far cleaner than coal or oil, and will produce roughly 250 megawatts of power. Roughly 60-70 percent of that power will be used internally, he said, while the remaining percentage will be sold back to the power grid.

Aside from the abundance of natural gas in the region, Marr credited other important “geographic drivers” for the company's decision to build in Beaver County, including the fact that 70 percent of the plant's customers live within a 700-mile radius.

“That seems like quite a long distance,” Marr said. “But when you consider that the majority of our competition is in the Gulf, it makes it significantly easier to ship products to the northast and parts of Canada.”

Marr said access to a major river also was critical for the plant during the construction phase, as well as access to rail systems and major interstates when it comes time to export the product.

To quell anxiety from environmental groups concerned about introducing additional plastic products into circulation, Marr said Shell embarked on an $80 million remediation effort to clean up contamination from the former zinc smelting site.

“The (zinc smelting site) was operating on severely outdated permits and processes,” Marr said. “The area had tons of historical contamination.”

Trump addressed another environmental concern regarding air pollution from the petrochemical facility.

““(The United States) has the cleanest water and air we’ve ever had,” Trump said. “And we’re going to keep it that way.”

“I do think it is,” he said. “The United States is leading the world when in reducing carbon emissions and I think that should be celebrated.”

Trump said his efforts to roll back environmental regulations that could have stalled the plant's development are the reason that the project has moved forward so quickly.

"It was the Trump administration who made it possible, no one else. Without us, you would have never have been able to do this," Trump said.