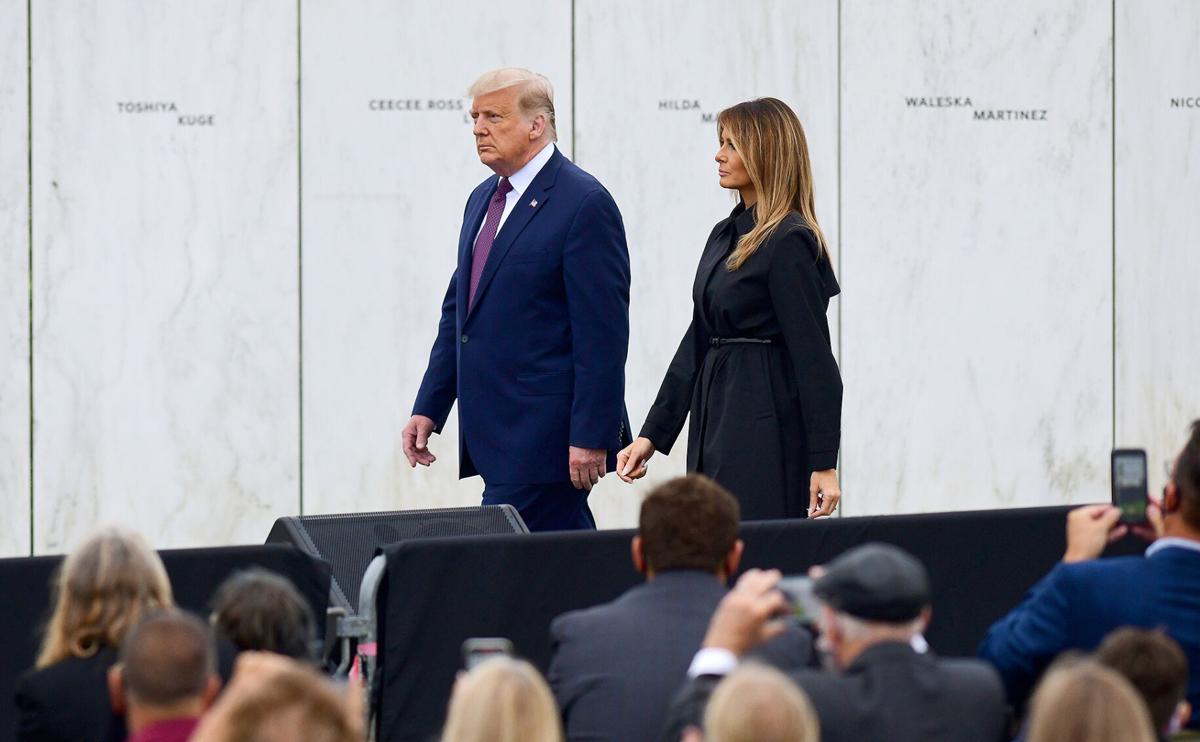 President Donald Trump and First Lady, Melania, walk past the Wall of Names at the start of the Flight 93 National Memorial “Moment of Remembrance” ceremony in Shanksville on Friday, September 11, 2020. Thomas Slusser/The Tribune-Democrat 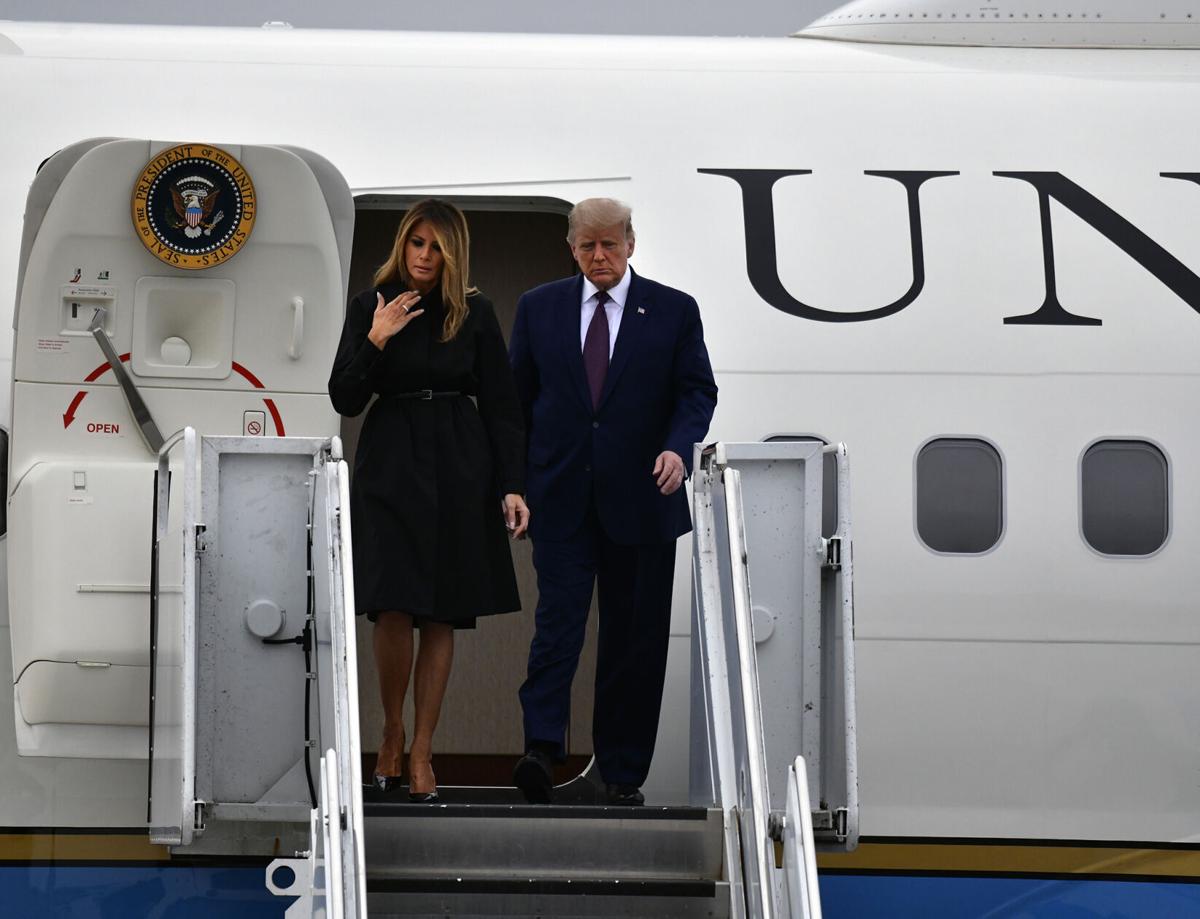 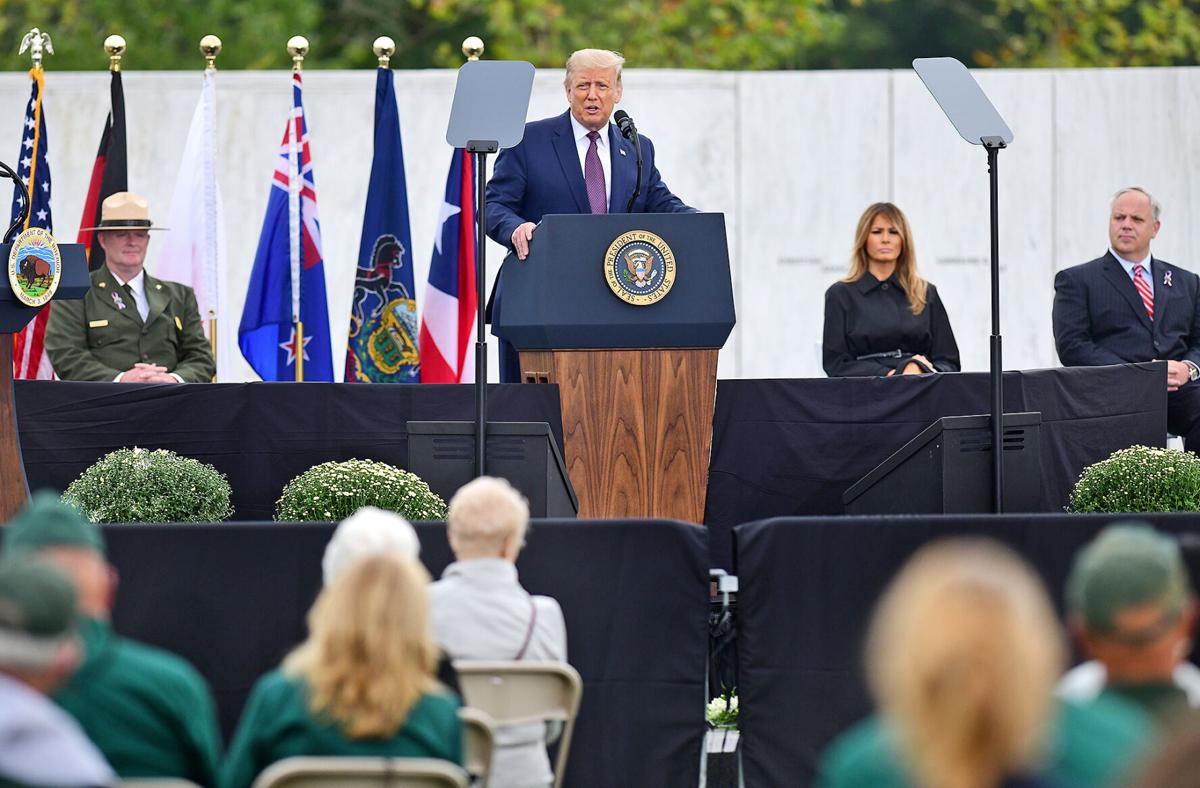 President Donald Trump and First Lady, Melania, walk past the Wall of Names at the start of the Flight 93 National Memorial “Moment of Remembrance” ceremony in Shanksville on Friday, September 11, 2020. Thomas Slusser/The Tribune-Democrat

SHANKSVILLE, PA. — About 150 guests, some wearing protective masks, sat in tan plastic chairs that were staggered a socially distanced 6 feet apart during the Flight 93 National Memorial “Moment of Remembrance” on Friday.

In contrast, throngs of people attended the previous 18 annual ceremonies that honored the 40 passengers and crew members who fought back against United Airlines Flight 93’s hijackers during the Sept 11, 2001, terrorist attacks — resulting in the plane crashing into a Somerset County field instead of reaching its intended target, likely the U.S. Capitol.

But this year’s gathering was scaled back — both in terms of time and attendance that was limited to family members of the passengers, memorial volunteers and dignitaries – because of the COVID-19 pandemic.

“In some ways, born of unfortunate circumstances, it’s a more intimate experience,” said D. Hamilton Peterson, the son of Donald Peterson, who died aboard the flight, while on his way to Yosemite National Park for a family reunion.

“I think how it’s set up here recognizes that America copes, adapts and overcomes, innovates – no matter what it faces,” Thompson said. “I think the setup today with the chairs socially distanced, the masks that we utilize, just shows how America can overcome just about anything. That’s how we’ve adapted here.

“In the bigger picture, I think that just reflects how resilient America is. Whatever comes along, we as American people, can come together and we can overcome it. We can adapt to it. Put it this way, we will beat whatever comes along. We won’t let it defeat us.”

U.S. Rep. John Joyce, whose 13th Congressional District includes the crash site, said “the COVID virus will not stop us from joining here together and remembering these individuals.”

The event was closed to the public.

The ceremony lasted approximately an hour, during which President Donald Trump spoke and the names of the 40 individuals were read aloud – each with accompanying twin bell tolls.

“It pained me to have a temporary closure,” said Stephen Clark, superintendent of the National Parks of Western Pennsylvania, which includes the Flight 93 site.

Clark added: “It was very, very challenging at times, because this is the people’s memorial. With the challenges with COVID, we wanted to still have a meaningful and a beautiful event.”

A group of the memorial’s volunteer ambassadors, easily identifiable by their matching forest green shirts, sat together in an area.

Bob Fisher, an ambassador from Central City, said the ceremony “felt the same” as it did in previous years. “Of course, less people here, the public wasn’t here, but the service still itself felt the same,” Fisher said.

Another ambassador, Bonnie Strayer, described the modified ceremony as “still rather nice.”

“I’m glad that this was not canceled,” said Strayer, who lives in New Paris.

The “Moment of Remembrance” occurred during a tumultuous year in which COVID-19 has played a role in the deaths of almost 200,000 U.S. citizens, while protests and riots have broken out across the nation over the issues of racial inequality and police violence.

“For a small moment, you forget everything that’s going on,” Fisher said. “It’s just like everything’s back to normal.”

Joyce said the country is at a point “where everyone must pause, join together, pray, understand that in face of adversity we can be one nation, under God, united and strong.”

Peterson recalled a different time, 19 years ago, when police officers and other first responders were hailed as heroes after they ran into the World Trade Center’s Twin Towers in New York City and spent weeks at Ground Zero.

“One of the things that struck me was, you have over 60 police officers rush into the buildings with no concern for race, ethnicity, national origin, political views – 60 police officers who gave their lives,” Peterson said. “And there since have been in excess of 1,100 first responders, including the firefighters and the lay citizens who also stepped up, who have died as a result of 9/11-related diseases.”

ASHTABULA [ndash] Deborah Gail Lawson, 55, passed away September 14, 2020 following a long illness. Services to honor her life will be held at a future date. Online obituary and a place for condolences at www.czupfuneral.com

CONNEAUT [ndash] Jerry Wade, 52, passed away Sept. 15, 2020 at the Hospice House in Cleveland with his loving family at his side. Services to celebrate his life will he held at a future date. Online obituary: www.czupfuneral.com