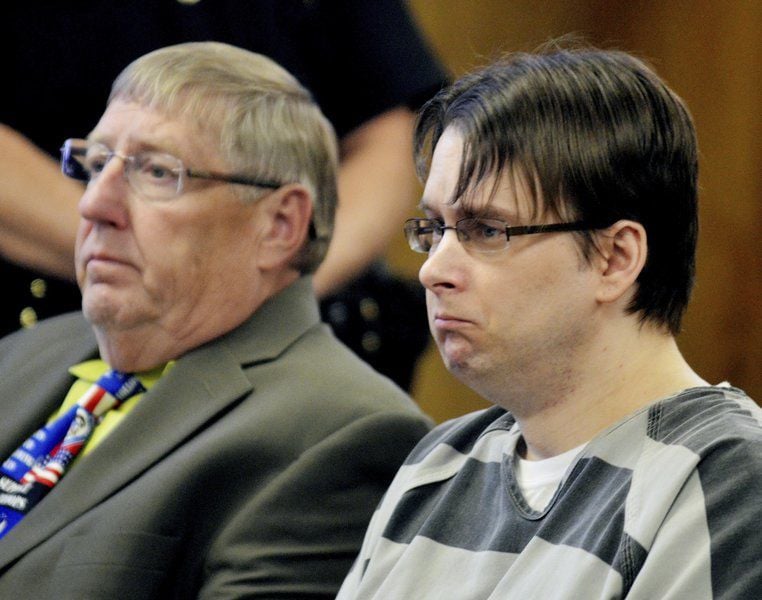 Jeffrey Ryan, 39, of Conneaut, waits for sentencing in the courtroom of Ashtabula County Common Pleas Judge Thomas Harris with his attorney David Per Due in June. He was found guilty of aggravated murder in the May 6, 2015, shooting death of his father, Thomas Ryan. He was sentenced to 30 years to life plus three years for a gun specification. 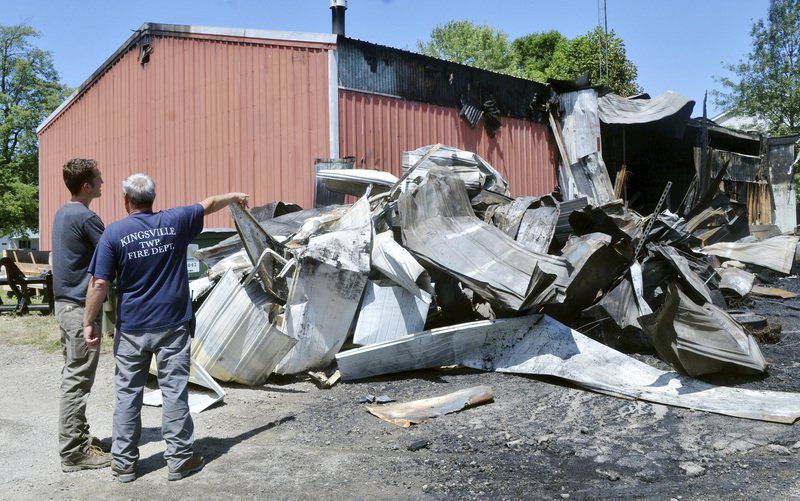 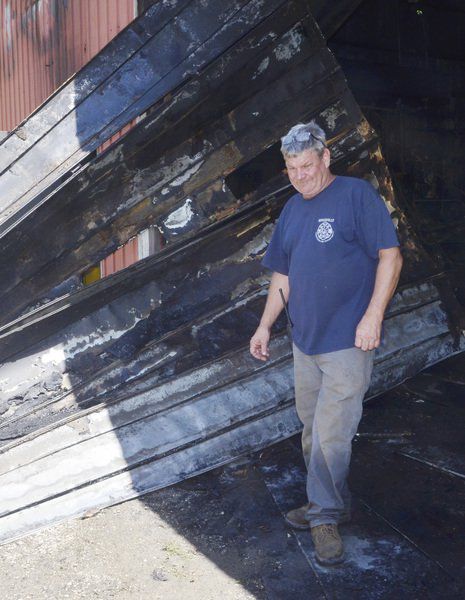 Jeffrey Ryan, 39, of Conneaut, waits for sentencing in the courtroom of Ashtabula County Common Pleas Judge Thomas Harris with his attorney David Per Due in June. He was found guilty of aggravated murder in the May 6, 2015, shooting death of his father, Thomas Ryan. He was sentenced to 30 years to life plus three years for a gun specification.

CONNEAUT — A murder trial, an administrative shake-up within the local school district, a trash-hauling plan trashed by voters and a fire that destroyed Kingsville Township’s road department were some of the Conneaut area’s top stories in 2016.

Here’s a recap of some of the activity that occurred the past year:

• Jan. 4 – Detective Sgt. Michael Colby is named interim chief of the Conneaut Police Department in advance of the retirement of Charles Burlingham later in the month. Colby, who joined the department in 1998, is appointed to the post Aug. 9.

• Jan. 10 – The Conneaut Area City Schools district begins 2016 as a member of Pennsylvania’s District 10 sports conference. Spartan teams had played an independent schedule since 2008, when the old Northeastern Conference folded.

• Jan. 19 — A fire at 313 Bailey Road critically injures Phillip Dalrymple, owner and occupant. Dalrymple, 68, dies from his injuries May 19.

• Feb. 9 – Kerry Gerdes is given his 2015 Citizen of the Year award at the Conneaut Area Chamber of Commerce’s annual membership dinner.

• Feb. 22 – A house at 316 Woodworth Road is demolished, the first in a series under the Neighborhood Initiative Program monitored by Ashtabula County. A ceremony at the work site heralds the event.

• March 8 – Rita Nerone of Conneaut is a winner in the Ohio Lottery’s $250,000 A Year For Life contest. Nerone, who bought her winning ticket at the Broad Street Mini-Mart, opts for a lump sum payment of $1.77 million.

• March 16 — Five Ashtabula men are arrested, and four are ultimately charged, in a scheme to bilk a Georgia home improvement center out of thousands of dollars of merchandise over a two-year period. The men are arrested while accepting delivery of items at a self-storage facility on Center Road in Conneaut. Three of the four are given conditional two-year probation sentences, while a fourth is scheduled to be sentenced Feb. 13, 2017.

• March 26 – Road rage and a love triangle are blamed for a traffic crash that sends a vehicle careening into a house at 875 Buffalo St. The driver of a vehicle pursuing another northbound on the street loses control and the vehicle punches a large hole in the house. No one is injured, but a woman is charged in the crash.

• April 12 – Demolition begins on the former B&M Shop at Amboy and West Main roads. The building had fallen into disrepair following the death of Lysle Ely Jr. in 2010.

• April 27 — Army Sgt. Joseph James, wanted for desertion, is located by police in an East Main Road apartment along with a large amount of weapons and ammunition.

• May 13 – Language that would have blended all the councils that monitor each of Ohio’s 14 Wild/Scenic rivers into one panel is pulled from a Senate bill. Conneaut’s council opposed the proposed move.

• May 15 – The Healing Field of Honor, a display of 400 flags at Greenlawn Memory Gardens in North Kingsville, does not return in 2016 after several years. Officials say the display could return in the future.

• May 23 – The Gateway Plaza shopping center is sold to Ideal Ohio Holdings LLC for $350,000. A spokesman for the new owner promises to find tenants and will invest more than $800,000 into the plaza’s repair.

• May 25 – Penny Armeni, executive director at the Conneaut Arts Center since 2000, announces she will step down effective Sept. 1. Heather Kovacic takes her place.

• May 29 — An explosive device that detonates in New York seriously injures a man, and three Conneaut residents are charged in the attack. Keith Seppi, Donna Seppi and Cindy Shields eventually plead to charges and are sentenced to prison terms in late November and December.

• June 1 – A fundraising campaign is launched that ultimately raises enough money to buy, train and equip two dogs for the Conneaut Police Department.

• June 4 – The D-Day Museum, years in the making, opens its doors inside a former church at Lake Road and Harbor Street.

• June 12 – Upwards of 800 people participate in the Bike MS: Escape to the Lake bicycle excursion from Pennsylvania to Conneaut’s Township Park.

• June 14 – Testimony begins in the trial of Jeffrey Ryan of Conneaut, accused of shooting his father, Thomas Ryan, to death in May 2015, inside their Benjamin Street house. One week later, after deliberating less than three hours, a jury finds Ryan guilty of planning and committing the murder. He is sentenced to serve 30 years to life in prison. Ryan is appealing the verdict.

• June 14 – After months of discussion, and an April 19 public hearing attended by some 70 people, a majority of City Council members approve legislation authorizing an exclusive residential trash-hauling program for the city. At the same meeting, council adopts an ordinance giving Waste Management the contract. Soon after the vote, Colin Fagan of C&C Disposal begins a petition drive to put the matter before voters in November. On Aug. 8, the county election board approves the referendum for the ballot.

• July 11 – A bucket from one of the historic Hulett unloaders at the Pittsburgh and Conneaut Dock Company, salvaged in 1994 when the unloaders were disassembled, needs to be moved from its storage spot near the dock company entrance, officials said. The bucket sits on land once leased by the Port Conneaut Federal Credit Union.

• July 17 – A fire of unknown origin causes millions of dollars damage to the Kingsville Township road garage and its contents, including heavy trucks and earthmovers. On Aug. 2, trustees hire a independent adjuster to deal with insurance claims.

• July 18 — Raymond Edder of Conneaut is arrested after reportedly kidnapping a woman at gunpoint from a mobile home in North Kingsville.

• Aug. 6 – More than a mile of Gore Road is paved in North Kingsville. The work, which includes a section of Poore Road, is a $200,000 project partially financed by grants.

• Aug. 19 — Legal action aimed at cleaning up the Amboy School demolition site gives control of the remediation process to a court-appointed receiver. The building was knocked down in 2015 without authorization.

• Aug. 19 – D-Day Conneaut weekend begins. Some 1,200 re-enactors participate, and thousands of spectators see new events, such as a tank battle on the Township Park beach.

• Aug. 26 – Kathryn Ingram of Conneaut is arrested and charged with felony arson soon after a pickup truck is set ablaze at NorthCoast Construction, which she co-owns. A trial in county court is scheduled to begin Feb. 2.

• Aug. 29 – Heavy equipment used to prepare a section of Sandusky Street near Russell Street for paving damages some 273 feet of fragile sewer line beneath the pavement. Installing replacement pipe is a $90,000 project.

• Sept. 6 — A new Conneaut Creek kayak/canoe launch site is created along Center Street by the Ohio Department of Natural Resources.

• Sept. 8 — Roger Bacon, 70, of Pierpont, and Raymond Reed, 80, of Kingsville Township, are killed when their vehicles collided at routes 7 and 84 in Monroe Township. Reed failed to yield for a stop sign, according to the Ohio State Highway Patrol.

• Sept. 24 — A marker along Route 20 at the Pennsylvania line commemorating the Western Reserve is re-dedicated at a ceremony.

• Sept. 27 — An angry Rod Raker denounces the city’s treatment of Malek Park and the Dorothy Shumake Arboretum at a City Council meeting and also resigns his seat on the Conneaut Tree Commission.

• Oct. 17 — Some 300 feet of sidewalk along Route 193 connecting Kingsville Elementary School and the Kingsville Township post office is installed with proceeds from four years’ worth of fundraisers.

• Oct. 28 — Andrea Mucciarone is charged with endangering children after her 2-year-old son drinks vodka she brought into a Spartan football game in a child’s “sippy” cup.

• Nov. 29 — City officials announce the Bunkhouse, a condemned downtown building, is officially the property of Schwartz Construction, which will construct storefronts in the structure.

• Dec. 4 — Joseph Bennett, convicted of killing Sam Kosik in 2001 and sentenced to serve 15-to-life behind bars, is denied parole in his first appearance before the Ohio Parole Board.

• Dec. 23 — The Beef and Beer Restaurant closes after 47 years in business.