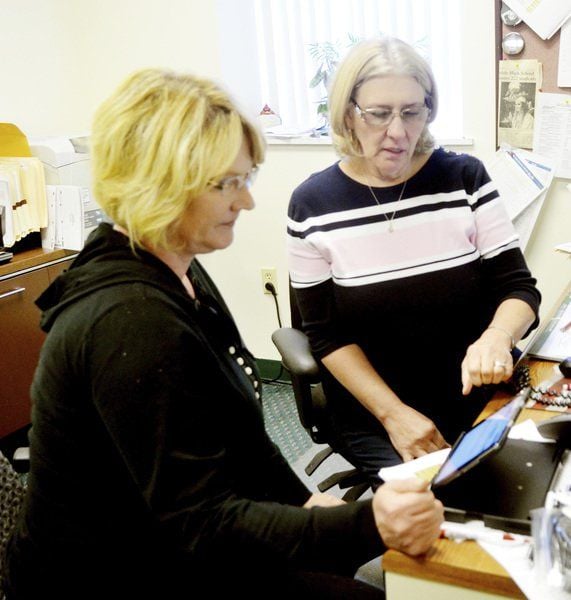 Sandra Johnston, a 27 year precinct worker from Ashtabula, (left) learns how to use a new computer tablet on Thursday at the Ashtabula County Board of Elections in Jefferson with the assistance of deputy director Carol Lovas. 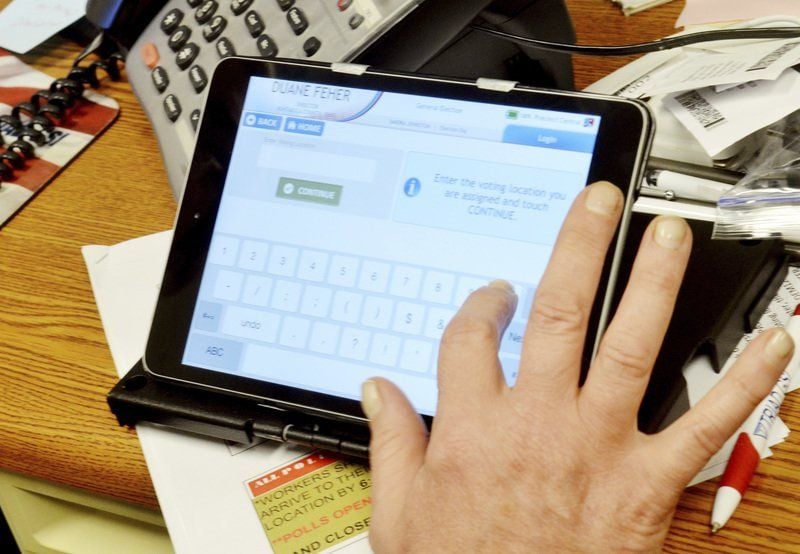 Sandra Johnston, a 27 year precinct worker from Ashtabula, learns how to use a new computer tablet on Thursday at the Ashtabula County Board of Elections in Jefferson.

Sandra Johnston, a 27 year precinct worker from Ashtabula, (left) learns how to use a new computer tablet on Thursday at the Ashtabula County Board of Elections in Jefferson with the assistance of deputy director Carol Lovas.

Sandra Johnston, a 27 year precinct worker from Ashtabula, learns how to use a new computer tablet on Thursday at the Ashtabula County Board of Elections in Jefferson.

The devices, no larger than a book, will be used by precinct workers in place of the paper poll books that contain voter information, including precinct location and signatures.

In late September, county election boards in Ohio learned the state had earmarked money to help the board purchase e-poll books. Ashtabula County is among the many that decided to make the leap in time for the general election. That gave the county less than two months to order more than 150 of the tablets and train hundreds of precinct workers in its use.

Despite the tight time squeeze, officials said they are sure the e-poll books will have a successful debut.

"We're in as good a position as we can possibly be," Duane Feher, Election Board director, said at a Thursday morning meeting.

With any new process, however, glitches may pop up, Feher said.

"There's going to be a learning curve," he said.

E-poll books will be found at each of the county's 104 precincts. Using Wi-Fi technology that connects each device to a database, operators can quickly retrieve information about voters by scanning their driver's license and pressing a few buttons.

Voters will hardly notice any difference, officials said: They still must present identification and sign their names. Starting Tuesday, however, voters will sign an electronic screen, just like they do when they use a credit card to make a purchase at a store.

"It should make it more convenient and quicker for the voters," said board member Luanne Laakso.

Boosting confidence about Tuesday's election is the ample training workers have received. More than 1,500 hours of instruction have been logged, and many precinct workers have voluntarily attended multiple classes over the weeks, officials said.

"I feel a lot more comfortable today knowing they've had several more training sessions," said board member Joseph Varckette. "Each precinct will have a lot of trained people. There's a lot of comfort knowing that. The poll workers really bought into the technology."

The entire election staff has worked hard to get the e-poll books ready in time for Tuesday, Feher said.

"We started late in the process, but everyone in the office has busted their butts to put us in the best position to be successful," he said.

Charlie Frye, board chairman, praised Feher, deputy director Carol Lovas and their employees for their effort.

"I really have to commend the staff," he said. "The stress level has been really high. You've risen to the occasion."

State lawmakers earmarked $12.7 million in a budget approved in June to help each of Ohio's 88 counties obtain e-poll book technology. Ashtabula County's investment was $130,000, of which some $39,000 came from the county.

Also at the meeting, Isaac Arthur was introduced as the board's newest member. He replaces Myra Brown, who recently resigned because of health reasons.