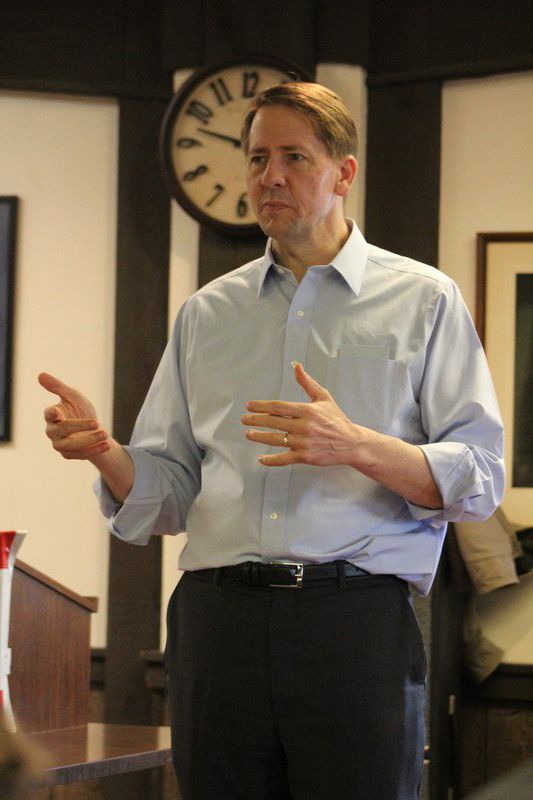 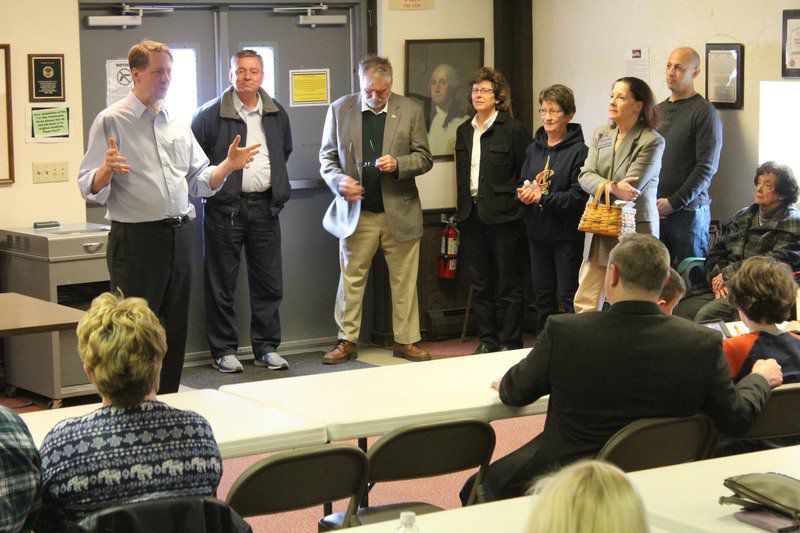 Saturday afternoon at the Ashtabula Township Hall, said his fight is “for the soul of

politics in the state and the country.”

Cordray said his campaign is focused on “kitchen table issues” such as access to affordable health care, improved education and job training initiatives, and the spread of economic development and job creation across the state.

“Republicans have controlled the state government for 20 of the last 24 years. It is time for change and we represent that change,” he said.

Cordray, a 58-year-old Grove City native, spent two years each as Ohio treasurer and attorney general before being appointed by President Obama to lead the Consumer Financial Protection Bureau.

On Saturday, he pointed to the bureau’s enforcement measures against Wells Fargo Bank when it was caught fraudulently opening accounts for customers, which he said returned $12 billion in wrongful fees to 30 million Americans — “including lots and lots of Ohioans” — as well as the bureau’s complaint service, which fielded more than 1.3 million complaints.

Cordray, in one of his final actions as CFPB director, placed several limits on the short-term loan or “payday” lending industry, through which Ohio has the highest average interest rates in the nation — close to 600 percent, two to three times higher than neighboring states.

“People get into that loan thinking they’ll get right out again but they don’t,” he said. “They’re living their life up (against) a 600 percent rate of interest, which inevitably leads to bankruptcy and ruin.”

Cordray told the Star Beacon Saturday he supports the short-term loan regulatory fix in Ohio House Bill 123, but the legislation has failed to gain traction in the General Assembly, and possibly an even stronger “crackdown.” He also recalled news this week of Republican Ohio House Speaker Cliff Rosenberger’s resignation amidst an FBI investigation into his dealings with payday lending industry lobbyists who allegedly traded foreign trips for legislative favors.

“It is ugly, it is dirty what’s going on in Columbus and we’re going to have to clean it up,” he told attendees.

Considering the state’s recent discontinuation of the sales tax on Medicaid-managed care organizations — which will short Ashtabula County by about $1.3 million annually — Cordray painted a state administration that is at “war with local governments,” linking the revenue loss to other ongoing reductions in local government funding, the state prison system’s refusal to house low-level felony offenders and a movement to centralize municipal tax collection at the state level.

“We can’t have a state government that’s hostile to the local government in the state. They have to be in partnership,” he said, also calling Gov. John Kasich’s offering of MCO tax transitional aid — $1.9 million of which came to Ashtabula County — “kind of a sham.”

On property taxes and local school districts, Cordray invoked the failures of online charter school “experiments” in the state.

“For a number of years, it has been pulling billions of dollars out of our public schools,” he said. “It was meant to provide better alternatives for education and has not done that.”

County Treasurer Dawn Cragon, who also chairs the county Land Bank, asked Cordray about state funding for blighted commercial structures — specifically pointing to Ashtabula’s Carlisle Building, which has yet to receive a cleanup plan from the U.S. EPA.

“We need to get those sites back and ready to be productive,” Cordray said. “I think we’ve been fundamentally on a wrong path in economic development. We’re all about making these lucrative packages for someone to come from out of state and bring their businesses here.

“We should spend some of our time and effort building our local businesses here and giving them capital infusions so they can grow.”

“I liked to hear he wanted to bring industry and jobs back to Ohio, especially our end of the state,” she told the Star Beacon following Saturday’s meet-and-greet.

Justin Thompson, the 27-year-old treasurer of the Ashtabula County Young Democrats, admires Cordray’s watchdog work with the CFPB, as well as his willingness to appear in the county — “you don’t get major politicians coming to Ashtabula that much anymore,” he said.

“I want somebody that can bridge both sides; that can reach both sides of the aisle,” he said.

“He’s standing up for the rights of the individual, as opposed to, like a Citizens United, or looking after payday lending as a whole,” Thompson said.

Harpersfield Township trustee Ray Gruber — a member of the Ashtabula County branch of the Ohio AFL-CIO, which has backed Cordray — said Cordray brought up “the right issues” Saturday.

“His issues pertain directly to the working people and the elderly in the county and in the state,” he told the Star Beacon. “I’ve got to believe he’s the man who can get things done.”

He could face opposition in the November general from Republican Ohio Attorney General Mike DeWine, who edged Cordray to take the attorney general seat in 2010, or Ohio Lt. Gov. Mary Taylor.

“When there’s a Republican in the White House — when that happens, we tend to do really well,” Cordray told those in the township hall, adding he expects the state’s usually high governor election turnout, as those ballots always include senator races.

“It’s a sign that it’s a promising year,” he said.