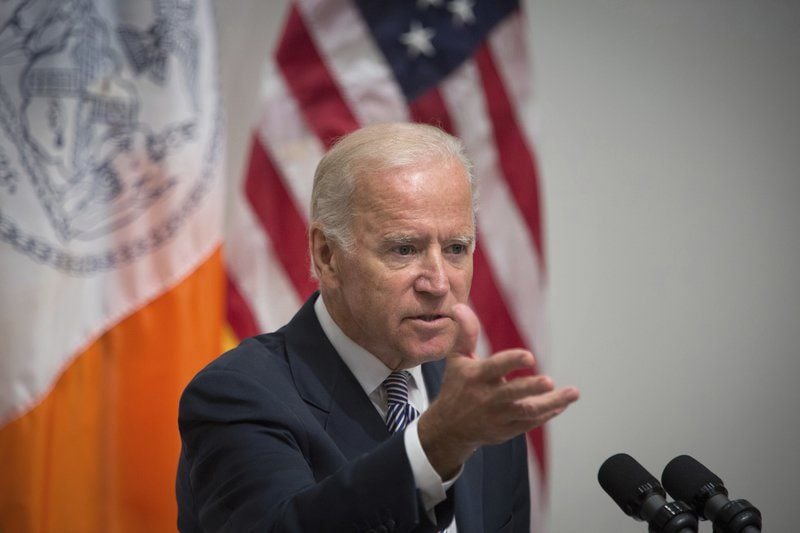 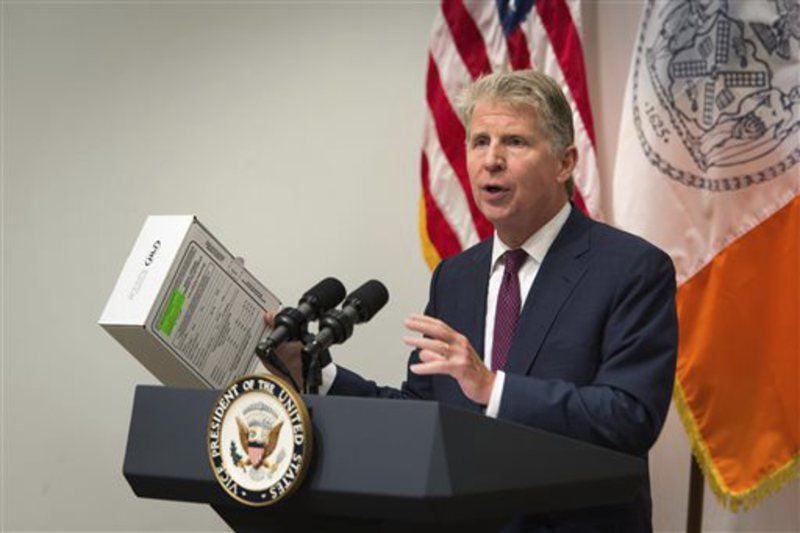 On Thursday, officials announced almost $80 million in grant funding that will go toward a nationwide push for law enforcement agencies to submit backlogged rape kits for new DNA tests, including almost $2 million for the Ohio Bureau of Criminal Investigation.

The state's initiative to close sexual assault cold cases began in 2011, and a new state law that took effect in March requires all rape kits previously untested for DNA to be submitted to the bureau by next March. It also established a 30-day submission deadline moving forward.

In Ashtabula County, the largest law enforcement departments have stayed ahead of their submissions over the years, and Ashtabula city police have made strides in working down the number of kits the department accumulated around the 1990s.

On Thursday, Manhattan District Attorney Cyrus Vance Jr. announced his office would contribute $38 million to the effort, with $1.9 million for the Ohio BCI, which has been retesting all of Ohio's submitted kits.

Vice President Joe Biden and U.S. Attorney General Loretta Lynch simultaneously announced $41 million for several agencies across the country, including an additional about $1.9 million for Cuyahoga County, to pay for testing, investigation, prosecution and victim support.

“This is one of the largest investments in public safety in generations,” said Plain Dealer reporter Rachel Dissell.

She said not only will many unsolved rape cases finally reach a conclusion, but many perpetrators — an alarming number of whom investigators have learned are serial offenders — will be put away.

That year, 11 bodies were found around the home of Anthony Sowell, a convicted rapist. During their investigation, they filed a public records request to determine how many untested rape kits were being stored at the city police department. The department's initial answer was, essentially, “We don’t know.”

More than a year later, police determined they were storing about 4,000 untested rape kits, she said.

After that figure came to light, the stacks of neglected evidence started getting state attention. It was an "unusually positive use of investigative reporting," Bruce Shapiro, executive director of the Dart Center for Journalism and Trauma, told the Columbia Journalism Review earlier this month.

“As journalists, we just did our job — to ask questions and be persistent about getting answers," Dissell said.

"It was more than disheartening to see how many sexual assault cases got such a cursory investigation and how, in those cases, it often led to other women being attacked."

In 2011, Ohio Attorney General Mike DeWine declared each of those kits would be tested at the state’s Bureau of Criminal Investigation crime lab. The office hired 10 additional forensic analysts to handle the extra work.

In 2013, Cuyahoga County Prosecutor Timothy McGinty established a rape task force that meets regularly to review rape cases and prioritize those that are pushing the state's statute of limitations.

However, Dissell reported in August that less than 200 of the state’s more than 900 law enforcement agencies have been submitting backlogged rape kits for testing, according to the AG's office.

Ashtabula Police Department ranked seventh on BCI's list of submitting organizations at 104 total kits — 85 of those were lab-tested and yielded 30 DNA matches.

Chief Robert Stell said in all, the department has submitted about 400 rape kits since 2011.

Ashtabula County Medical Center performs the kits on suspected rape victims at no cost to county departments. Ohio hospitals are then reimbursed by the state for the service.

Stell said an Ashtabula officer drives a batch of kits to the lab each week, and results are usually returned from BCI within two to three weeks, sometimes sooner.

He said some of the submitted kits date back to the 1990s, around when they began piling up in the department's evidence room.

Before 1998, DNA testing wasn't available at BCI, according to Dissell, meaning the lab could only confirm the presence of blood or semen in the collected kit — it couldn't link DNA to rape suspects. And before then, Ohio wasn't using the CODIS database.

"In the past, often kits were not sent if there weren't charges or a case was not being prosecuted," she wrote in an email. "But now, the kits are being viewed as an investigative tool. They can link together cases and ... patterns, if tested."

In June, state legislators extended the statute of limitations for rape offenses from 20 years to 25 years — it was six years in the 1990s — with a possible five-year extension if new DNA evidence was matched to a suspect.

New tests mean new leads on an old rape investigation, but the end results are mixed. Dissell said she's spoken to dozens of rape victims over the years, with various reactions to the new information.

"Some are angry it has taken so long to test their kits," she wrote. "Some do not want their case reopened. Others are relieved that they finally know who attacked them and eager to have their day in court."

Stell said some suspects in the city's rape investigations were never found, or some of the related cases had already been prosecuted. Often, DNA results matched to suspects who, "lo and behold, were in prison for rape," he said.

Although Dissell said those cases only make up a small percentage of reported rapes, Det. Sean Ward of the Ashtabula County Sheriff's Department said misreports happen "more frequently than some people might think."

The sheriff's department has submitted 20 total rape kits since the March law took effect, Ward said — nine of those were backlogged kits requested from the department by BCI, according to the bureau's records.

Those kits have yet to yield any DNA hits, he said, but 10 more were sent last week and seven of the bureau's 14 other requests have been prepared to go out. He said although the new tests don't always lead to new suspects, they will lead to new indictments.

When Ward was with Ashtabula city police, a 1997 rape investigation that went cold was revisited in 2005 at the victim's request, he said. A rape kit DNA test was matched to a suspect who had been extradited to Texas. An article in the Star Beacon about the criminal case prompted another of the suspect's victims to come forward, he said.

"We are keeping up with the rape kits that go down to BCI," said Sheriff William Johnson. "There's been some old ones that they're requesting to recheck (for DNA). Some of those we don't even have anymore because the case has been dismissed or adjudicated."

Often, victims won't appear for court proceedings, even if prosecutors have the DNA evidence in-hand, he said. Ward said during his time in Ashtabula, rape victims would often "stop communicating with law enforcement altogether."

Johnson said the department keeps all its rape kits until they're approved by the courts to be destroyed.

Geneva-on-the-Lake Police Department submitted one old kit, which returned one DNA match. Conneaut and Geneva city police never accumulated a backlog of old kits, according to their respective chiefs.

Geneva Chief Dan Dudik said the kits are sent regularly as rapes are reported, but couldn't indicate how many the department has sent since 2011. The department's evidence system isn't barcoded or easily quantifiable, as is the county sheriff's department, but he said a new filing system is in the works.

As the DNA results rolled in, Cuyahoga County investigators learned up to one-third of reported cases in the Greater Cleveland area were perpetrated by the same person, Dissell said. The potential threat of a single at-large suspect became alarmingly visible.

"I've been in this business for 43 years and I thought I knew something about it," McGinty told the Review earlier this month. "I was astonished."

DNA results from more than 100 rape and kidnapping cases dating back to 1993 showed 280 offenders had sexually assaulted at least two women — some of them were linked to more than a dozen different women. A former Lake County probations officer was implicated in the rapes of 15 different women.

"That's one of the things we're starting to understand more about sexual assault and rape — most men do not rape anybody, but the ones that do tend to do it multiple times," Dissell said.

Stell said his department recently learned that a couple of its old kit results pointed to one particular rapist who was already imprisoned on another rape case.

In some cases, DNA evidence isn't enough to close a rape investigation, Dissell said, "but by having it in the system, you could link it to other cases" — which can only increase the likelihood of a conviction.

And although the majority of the test results Ashtabula city police have received from BCI didn't identify a suspect, Stell said if at least one new lead comes out of the state's rally, it's worth it.

"That's one more rapist we can prosecute, get off the street, and one more victim that gets justice," he said. "I do feel this program has been successful and continues to be."

Dissell continues to follow the issue, reporting regularly on new charges leveled against suspected and convicted rapists and their court proceedings. She said she hopes the state's renewed inquiry leads to a deeper understanding and openness about rape, "one of the most serious crimes, right behind murder."

"What I'd like to see is that law enforcement and the community learn more about sexual assault cases and change the way we all respond to them," she wrote to the Star Beacon.

"That way, we aren't writing a different version of this same story a decade from now."

Justin Dennis covers southern Ashtabula County for the Star Beacon. He can be reached at (440) 998-2323 ext. 124. Follow him on Twitter @JustinDennis.