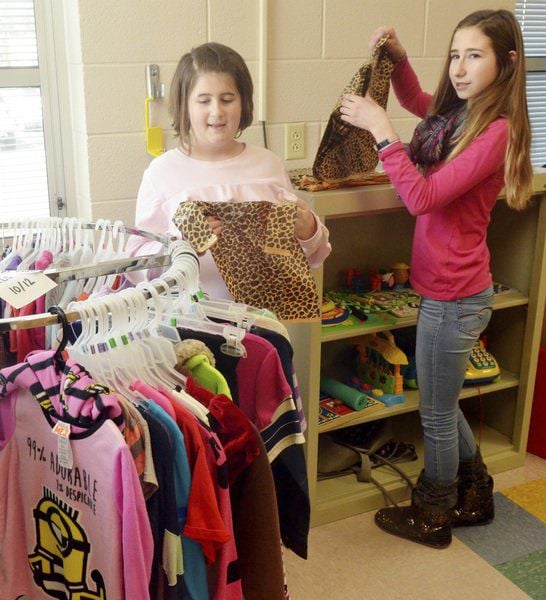 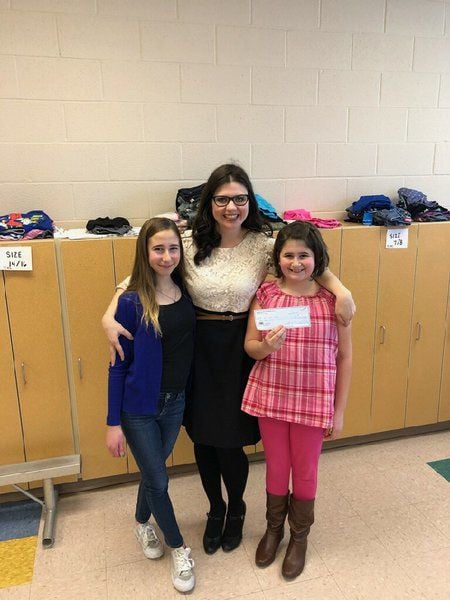 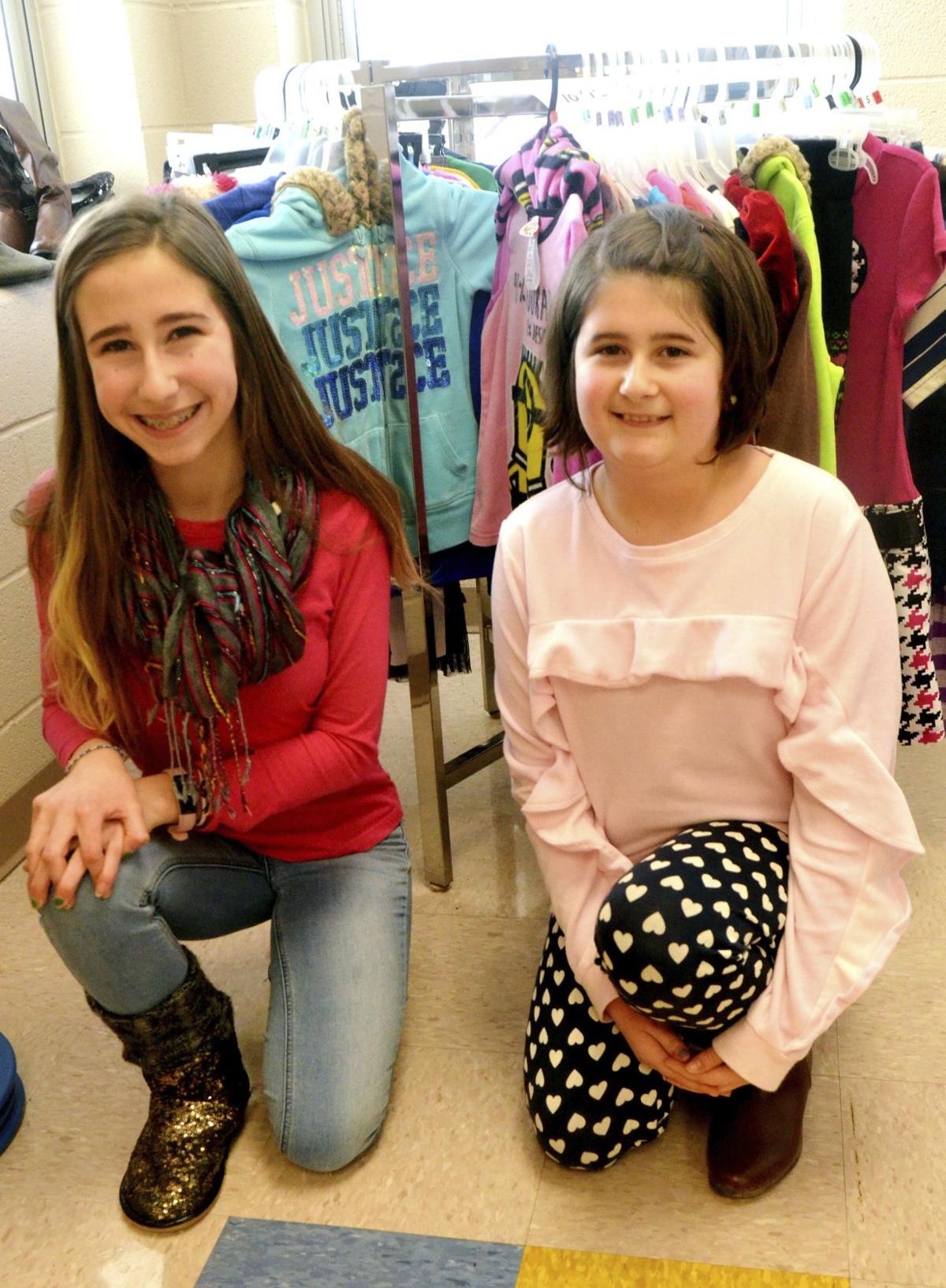 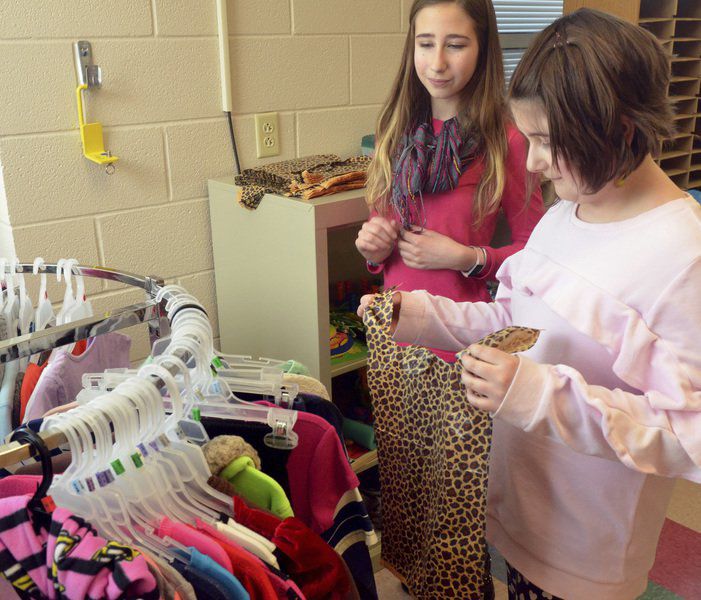 CONNEAUT — For the past several months, tiny “stores” inside three Conneaut schools have been providing new and gently-used clothing to students in need.

Suit for School, the brainchild of sisters Rachel and Abby Brecht, offer clothing and shoes for boys and girls in a variety of sizes and styles. Teachers and staff members who think a child could benefit from a new garment can send the youngster to the store to pick out some new duds.

The idea was born last year during a family closet-cleaning project, said Rachel, 13, a student at Conneaut Middle School.

“We’ve got so many extra clothes and we never wear them,” added 9-year-old Abby, who attends Gateway Elementary School.

Why not make some of that clothing surplus

available to kids in need, they wondered.

“Some kids wear the same clothes every day,” Rachel said.

The program began last school year at Lakeshore Primary, home to Conneaut’s kindergarten through grade two students. The Brecht girls designed slips for teachers to fill out if they notice a student in need of “nice, clean clothes that fit,” according to the form. Slips are then relayed to Lisa Anderson, the building’s health aide, who seeks out the student and offers free clothes.

The Lakeshore location sees plenty of business, and the Brecht sisters deserve all the credit, Anderson said.

“A lot of kids are benefitting,” she said. “Both girls are amazing.”

Response at Lakeshore convinced the girls to add a boys department and new clothing to the inventory. The girls approached their church, First Congregational United Church of Christ, which quickly agreed to help with a cash contribution and the donation of clothing and shoes.

At the start of the 2017-18 year, the girls opened their second store at Gateway Elementary (grades three to five), the biggest of the three locations. Dawn Zappitelli, Gateway principal, said the store — located in a portion of an unused classroom — “has been an asset.”

The Brecht girls regularly check the inventory to see what needs to be restocked. Zappitelli said students are so happy to get new clothes.

“Just to see the smiles on their faces,” Zappitelli said. “It’s a great experience.”

A third location, at the middle school, was made possible by donations from businesspeople who heard the girls speak at a Conneaut Rotary Club meeting, said Chris Brecht, the girls’ father. Many gave contributions, led by a $200 gift from Orlando Brothers Golden Dawn supermarket, he said.

This week, Suit for School received a $1,000 gift from the Rotary Club, which will help the girls buy more new clothes and open a fourth location at Conneaut High School, Chris Brecht said.

A shop at CHS excites the sisters.

“We really want to expand it to (CHS),” Rachel said.

School administrators have been supportive

of the program, Abby said.

“The principals are very generous,” she said.

The program is structured to ensure privacy for kids who shop at the stores, school staff said.

Jody Brecht, the girls’ mother and a teacher in the Conneaut Area City Schools district, said the girls go shopping every couple of months to replenish their inventory.

“They try to go to name-brand stores,” Jody Brecht said. “They want the kids to feel comfortable (with their selections).”

The sisters have done all the work — planning, finding contacts in each building,

“They did it all themselves,” Jody Brecht said. “They stuck with it. And people have been embracing (the program).”