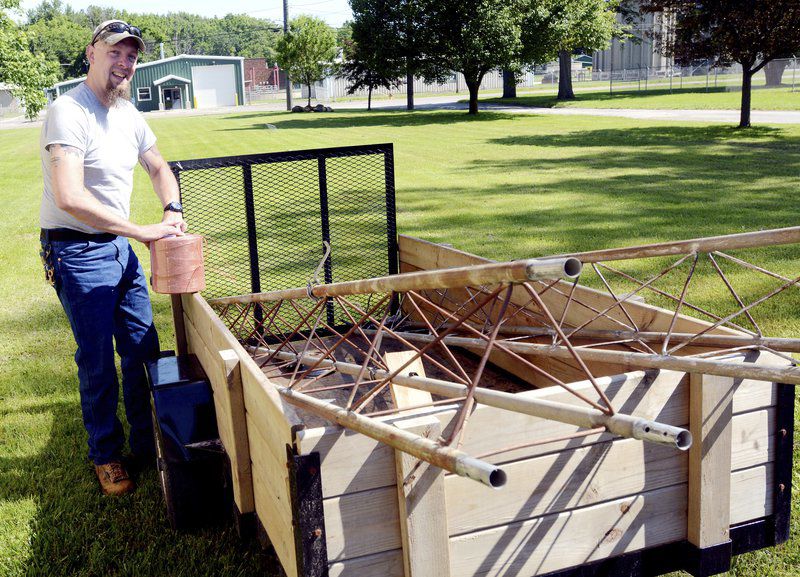 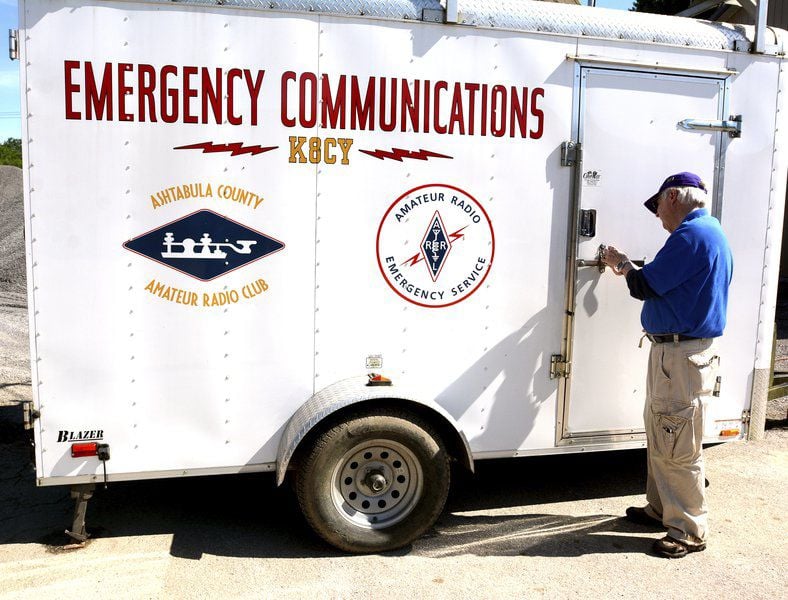 Paul Andrews prepares to open the doors of a portable ham radio operation's center at the Ashtabula County Amateur Radio Club's "Field Day" this weekend at the Geneva Township Garage.

Paul Andrews prepares to open the doors of a portable ham radio operation's center at the Ashtabula County Amateur Radio Club's "Field Day" this weekend at the Geneva Township Garage.

GENEVA TOWNSHIP — A small but committed group of amateur radio operators gathered this weekend for “Field Day” at the township garage.

The event is sponsored locally by the Ashtabula County Amateur Radio Club and nationally by the American Radio Relay League, which has been around for almost 100 years, said Paul Andrews, ACRAC spokesperson.

The event included 10 to 20 people and over 24 hours they work to hone their skills and have some fun.

“This is the biggest single event on the calendar,” he said.

The skills are important for communications during emergencies, Andrews said.

Even with today’s technology, he said it is important to have amateur radio operators in case normal communication towers are not operable. Most towers do not have back up batteries or generators.

For example, Andrews said amateur radio operators were called in to assist in communications in southern and western Ohio after tornadoes hit the communities.

Andrews said 35,000 to 40,000 amateur radio operators in the United States, Canada and the Caribbean will be participating in the “Field Day,” which continues today and is set to conclude at 2 p.m.

In Geneva Township, a portable trailer was used for potential on-site emergency operating. Andrews said the equipment in the trailer provides almost all the capability in the Ashtabula County Emergency Management Office.

Scafuro of Geneva said he doesn’t get as much time as he would like to communicate on his radio, but he loves the time he does have.

“I enjoy the creativity and the problem solving to make something work in any given scenario,” he said, adding that is just what happens in an emergency situation.

On the “hobby” side of the experience comes the opportunity to communicate with people all over the world. Scafuro said he used to chat on the radio from from midnight to 4 a.m., when he was on a different work shift. He had a group of people from Australia and California that would interact regularly.

“We would have a roundtable discussion about life,” he said.

The importance of emergency communications is a key to the club’s purpose, Andrews said.

“When everything else fails. It’s amateur radio. We can set up an email return ... we can even get to television,” he said.

Mentor resident, long time teacher and principal, Patricia Oster, 79, passed away 1/7/2020. She will be laid to rest at All Souls Cemetery. Her wishes were for all services to be private. Online obituary and condolences at www.czupfuneral.com