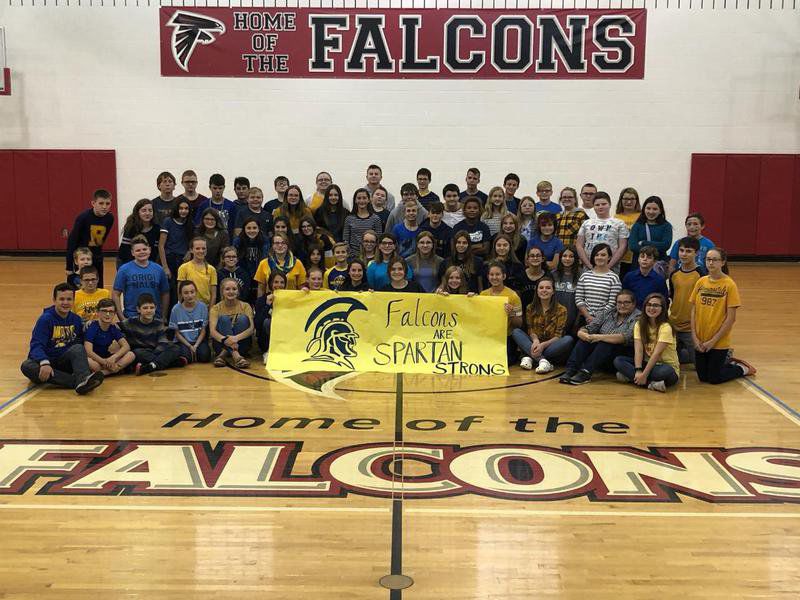 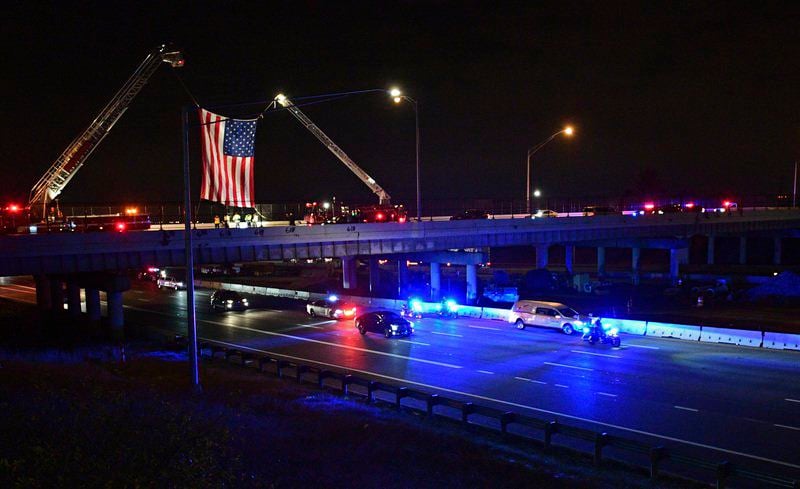 An escort of veterans motorcyclist groups assembled at the IX Center in Cleveland to escort Walker’s body and his family to his hometown. Leading the motorcade was Ashtabula County Sheriff William Johnson. The motorcade left Cleveland just before 9 p.m. on Tuesday night.

Fire and EMS departments from across the county gathered on the bridges above Interstate 90 in Ashtabula County to honor Walker as he passed. Around 40 people had already gathered at on the bridge at Route 534 in Geneva, as fire departments raised the flag.

Angie Gruber, President of the Blue Star Mothers, said she was there to support the family during their transition form blue star to gold star.

“This is my worst nightmare,” said Amy Hutchison, the group’s vice president.

Her son recently returned from Afghanistan.

Crowds started to gather in Conneaut around 8 p.m., and by 9:45, people lined both sides of Main Street. Firefighters hung an American flag above the intersection of Main and Broad streets. Parking lots around the procession’s route were filled with vehicles, and groups of people were traveling up and down Main Street handing out American flags.

The procession arrived in downtown Conneaut shortly before 10:30 p.m.

Geneva High School students were encouraged to wear red, white, and blue to honor Walker, and High School Principal Douglas Wetherholt posted a picture of a group of students with a banner expressing their support of Walker and Conneaut.

“Our hearts are saddened at the loss, not just to the district, but to our community. He was a son, he was a husband, he was a brother, so the loss is felt throughout the Conneaut community,” Riley said.

The Conneaut Area City Schools will observe a two-hour delay Wednesday, so that students and staff could attend Tuesday night’s ceremonies, Riley said.

“We’ve been trying to do as much as we can to honor him,” Riley said.

Walker and two other members of his unit died in a training accident in the early morning on Oct. 20, according to the 3rd Infantry Division. The Bradley Fighting Vehicle that Walker was riding in rolled off a bridge and fell into a stream near Fort Stewart in Georgia. Sergeant First Class Bryan Andrew Jenkins and Private First Class Antonio Gilbert Garcia were also killed.

Three other soldiers were injured, and were taken to Winn Community Army Hospital. Two were treated and released, and the third was taken to Memorial Hospital in Savannah, Ga..

“We want to wish [the Walker family] well. We hope they get through this difficult time with the help of family and friends and everyone coming together,” Conneaut City Council President Debbie Newcomb said at Monday night’s meeting.

“As Sgt. Thomas Cole Walker’s wife, it is an honor to bring him back to our hometown of Conneaut, Ohio. I want to express my deepest appreciation and thanks for the amount of love and support I have received from family, friends, and the entire Conneaut community,” Taylor Walker said. “Words cannot express my sorrow at this time. The upcoming events will be an honor for me to be at Cole’s side, remembering and honoring a great husband and soldier.”

Services for Thomas Cole Walker will be held at New Leaf Church at 2 p.m. on Saturday.

A candlelight vigil is scheduled on Sunday at Joslin Field. Gates will open at 4 p.m., and the vigil will start at 4:45, Riley said.

WARREN DILLAWAY contributed to this report.

CONNEAUT — For those who knew U.S. Army Sgt. Thomas Cole Walker of Conneaut, the candlelight vigil late Sunday afternoon at Joslin Field was a…