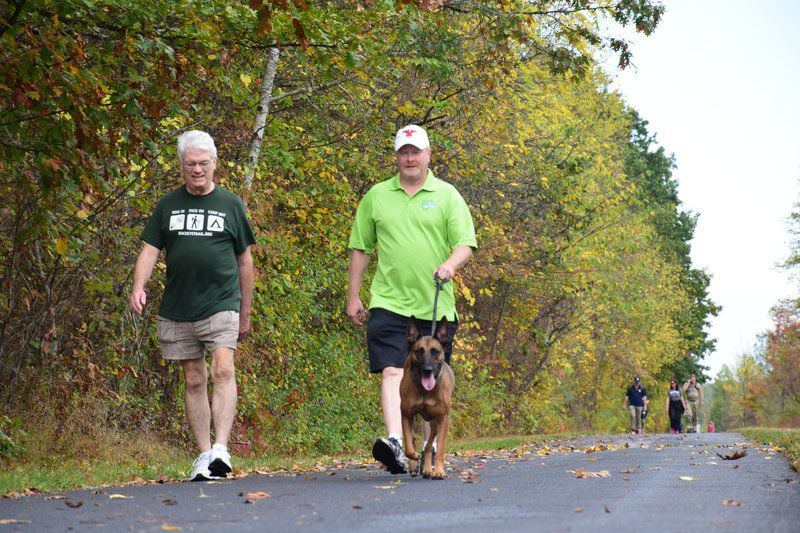 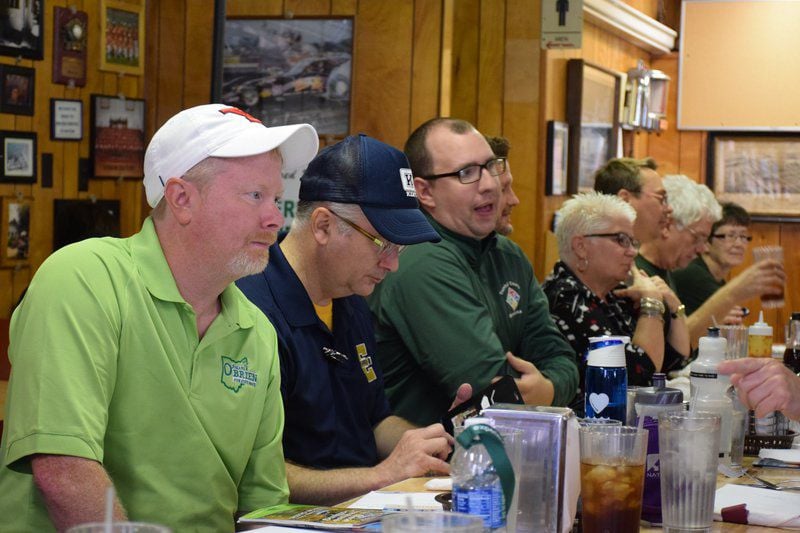 Thirty-second District State Sen. Sean O’Brien, left, meets with outdoor recreation and tourism officials from Trumbull and Ashtabula counties for lunch Thursday at Jefferson Diner in Jefferson, to draw awareness to the recently formed Ohio Legislative Trails Caucus, which seeks to spur development and support of Ohio’s more than 3,500 miles of trails.

Thirty-second District State Sen. Sean O’Brien, left, meets with outdoor recreation and tourism officials from Trumbull and Ashtabula counties for lunch Thursday at Jefferson Diner in Jefferson, to draw awareness to the recently formed Ohio Legislative Trails Caucus, which seeks to spur development and support of Ohio’s more than 3,500 miles of trails.

AUSTINBURG TOWNSHIP — State legislators put more than 12 miles on their walking shoes Thursday — from Austinburg Township to Rock Creek — to draw attention to the state’s outdoor trail system, which has found new representation in the Ohio Legislature.

State Sens. Sean O’Brien, D-Bazetta, and Steven Wilson, R-Maineville, and State Rep. Kent Smith, D-Euclid, are members of the newly formed, bipartisan Ohio Legislative Trails Caucus — the first such state caucus in the country — which seeks to advocate for outdoor trail development and maintenance in Ohio.

They joined constituent trail advocates like Stephen Walker of the Buckeye Trails Association, Ashtabula County Metroparks board member Charlie Kohli, and others for a daylong hike across part of the county’s 27-mile leg of the Western Reserve Greenway Trail.

Their trek continues for another 12 miles at about 9 a.m. today, at the Greenway’s Callender Road trailhead in Rock Creek. The walkers plan to stop for lunch at Woody’s Grub and Pub along North Maple Street in Orwell, before continuing onto the Hague Road trailhead in the village, and finishing at the trail’s State Route 87 exit, at the county line.

caucus, which he and Wilson co-chair, has swelled to 21 members and inspired a similar movement in

Michigan. Its first official meeting is set for Oct. 25 in Columbus, and officials are planning a similar trail outing.

The caucus has backing from several state recreation councils, including the Buckeye Trails Association, the Ohio Horseman’s Council and the Rails-to-Trails Conservancy, which repurposes abandoned railroad routes into hiking and biking trails. Walker told the Star Beacon he’s working to form a state water trails organization as well.

“We’re now able to organize this group and that group,” O’Brien said. “And by those different organizations coming under one umbrella and working with our caucus, we’ll be able to hopefully provide more funding and better education for our members.”

Stephanie Siegel, Ashtabula County Convention and Visitors Bureau executive director, joined the legislators and tourism and trail counterparts from O’Brien’s home county of Trumbull for lunch Thursday at Jefferson Diner along North Chestnut Street in Jefferson. She estimated the county boasts more than 100 miles of walking and biking trails, including its Greenway stretch, and state and metroparks.

“We know people come to the lake, but after they do that ... what’s that next tier of things they want to do?” she said.

County tourism accounted for $435 million in sales and close to 3,400 jobs in 2015, according to figures from the CVB. A customer perception study recently conducted by the bureau showed visitors are drawn to Lake Erie, and the county’s wineries and covered bridges, in that order — but No. 4 was its outdoor recreation opportunities.

“Whether that means hiking on a trail or going out on a charter boat or canoeing down the river — it’s that second level of ‘undiscovered.’ They go, ‘Oh wow, it’s a beautiful, beautiful county,’” Siegel said.

important part of the tourism industry that doesn’t get enough attention.”

“There’s redevelopment opportunities as public waterways become restored. ... We can do a lot more to enhance Lake Erie’s environmental effect and economic effect — the cleaner the lake, the stronger,” he said.

Kohli, a 34-year county metroparks board member, was one of the driving forces behind recently revived work on the North Shore Trail, which will connect the county’s southern border to the Ashtabula Harbor via the Greenway.

He said officials are also eyeing an abandoned rail line running from Dorset to Andover and Williamsfield to Jamestown, Pennsylvania for trail development — it’ll be dubbed the Pymatuning Valley Greenway, he said.

This spring, the county metroparks and other trail organizations will look to host a trails conference, and establish a master trail map for Ashtabula County, using grant funds from the National Park Service.

“It’s something everybody can do and it doesn’t cost a whole lot,” Kohli said.