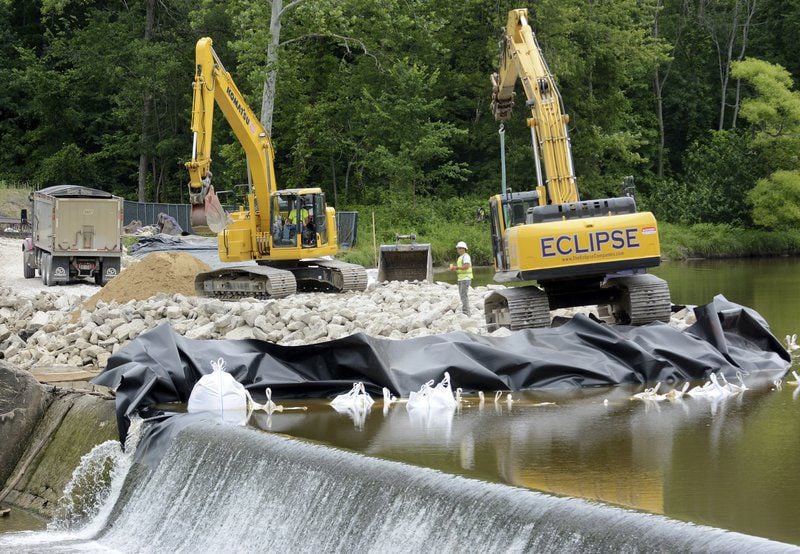 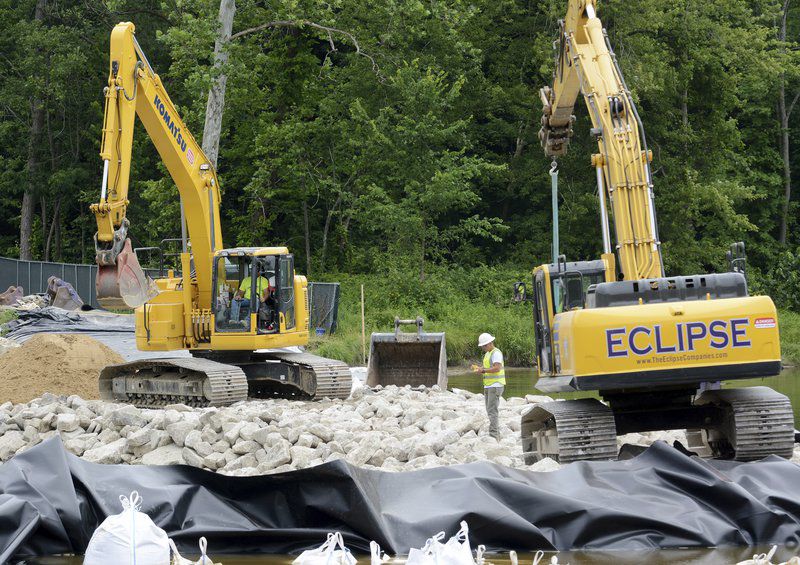 HARPERSFIELD TOWNSHIP — Work on the  new Harpersfield Dam is back in full swing, after a break for the spring spawning season, and the county is gearing up for an eventual rehabilitation of the bridge as well, said Army Corps of Engineers Public Affairs Officer Susan Blair and Ashtabula County Engineer Tim Martin.

The dam project started last fall after more than a decade of discussions and planning, said project manager Gabriel Schmidbauer back at the start of the project last fall. The dam will replace a deteriorating structure that was constructed in 1912 and will create a barrier to keep the sea lamprey from going up stream to destroy game fish.

Blair said construction crews took a break in the spring so the spawning season for the fish would not be affected but are now working hard to create a water diversion so the dam can be demolished in a safe way.

“They resumed construction on July 1,” Blair said. She said the Army Corps of Engineers is working with multiple agencies to insure the safety of the existing bridge.

The project is expected to be completed in 2020.

She said the project manager and officials from the U.S. Army Corps of Engineers are expecting to make a visit in the next several weeks.

Back in the fall Schmidbauer said the lamprey project was one of the first in Great Lakes region and very important for keeping the fish safe.

He also said the ACE got the financial go ahead more than two and a half years ago but land negotiations held up the process.

Martin said the county is in the beginning phases of discussion for a rehab project for the bridge with a goal of the project occurring in the 2021-2022.

“We are still in very preliminary design phase,” he said.

Tentative plans are to rehabilitate the bridge structure built in the 1860s and the steel portion of the bridge that was built after a flood in 1913, Martin said.

He said there are hopes to add an observation walkway on the east side of the bridge to go with the present one on the west side.

The dam project included significant cooperation between the ACE, the Ashtabula County Metroparks and the Great Lakes Fishery Commission.

The project is expected to cost $7 million with $3.6 million for construction and the rest for planning costs and project monitoring.