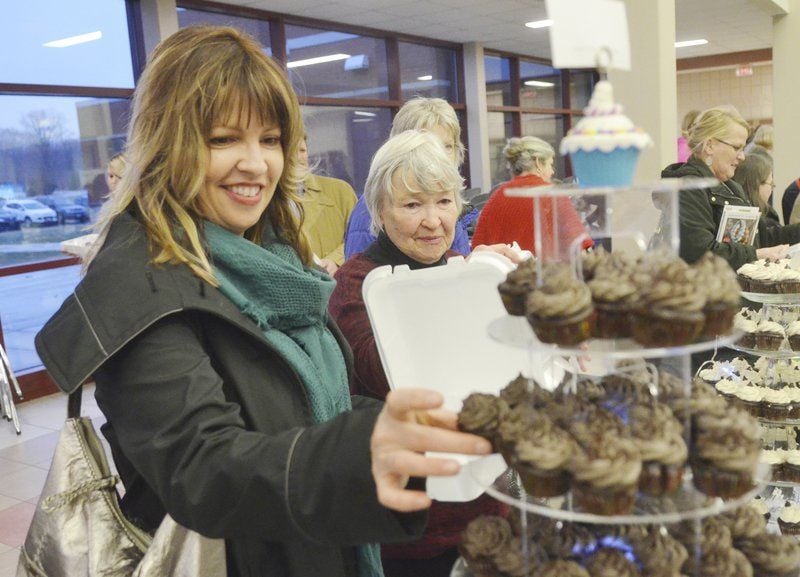 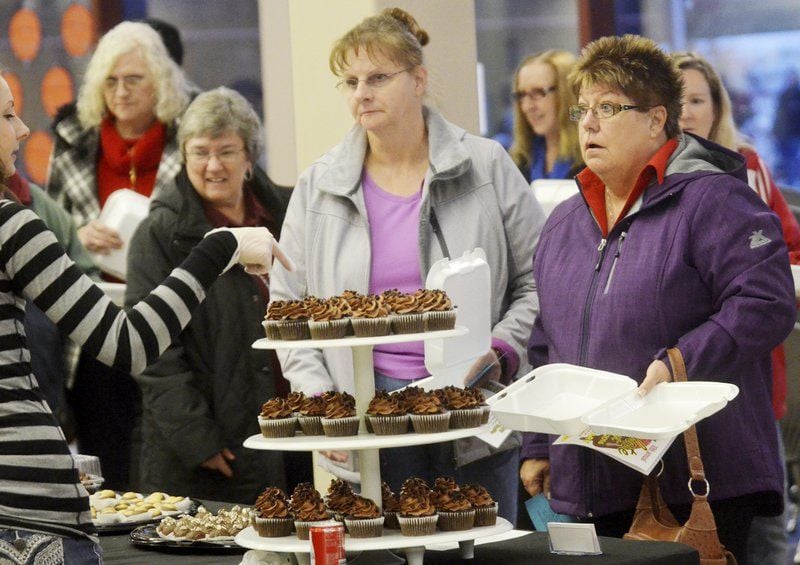 Christy Ollis, of Christy's Cakes and Creations (far left in striped shirt) waits on Rhonda Baehr (center in gray jacket) and Barb Sullivan, both of Geneva, (far right) on Tuesday evening at the Geneva Chocolate Fest at Geneva High School. 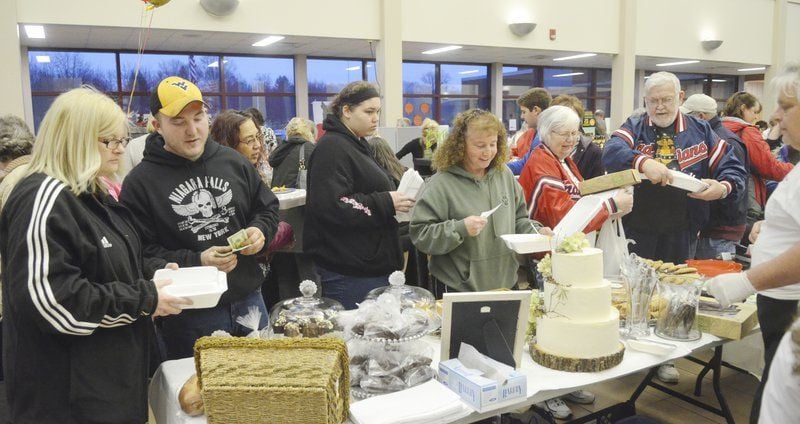 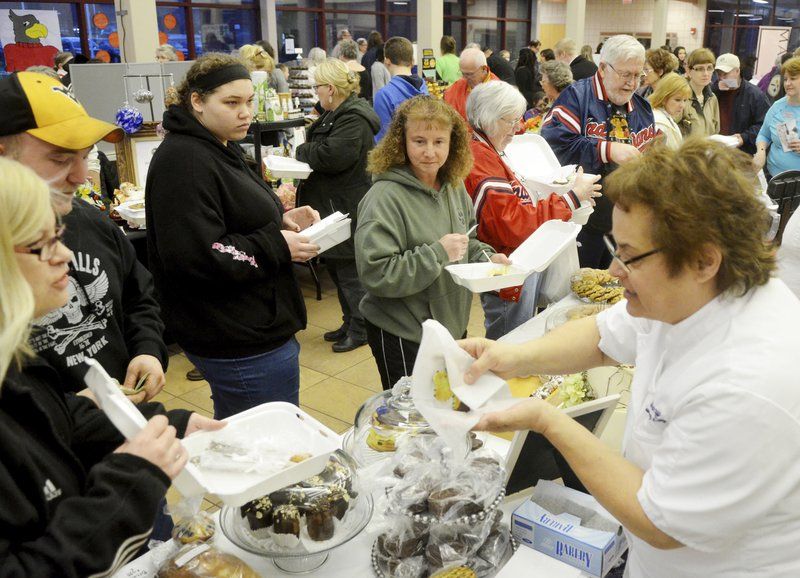 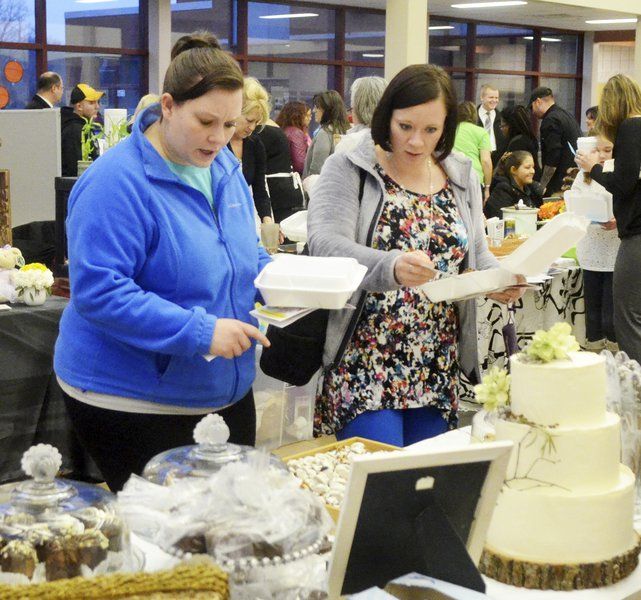 Sara Carothers (left) and her sister Anna Gill, both of Jefferson, check out the goodies at the Dolce Colpo baker table on Tuesday evening at the Geneva Chocolate Fest at Geneva High School.

Christy Ollis, of Christy's Cakes and Creations (far left in striped shirt) waits on Rhonda Baehr (center in gray jacket) and Barb Sullivan, both of Geneva, (far right) on Tuesday evening at the Geneva Chocolate Fest at Geneva High School.

Sara Carothers (left) and her sister Anna Gill, both of Jefferson, check out the goodies at the Dolce Colpo baker table on Tuesday evening at the Geneva Chocolate Fest at Geneva High School.

GENEVA — Hundreds of chocolate lovers made their way to the annual Geneva Rotary Club Chocolate Fest on Tuesday evening at Geneva High School to grab gourmet chocolates and help support a worthy cause.

Chocolate lovers got to buy a $5 ticket and get five chocolate samples from the dozens of booths set up by local businesses. All proceeds from the ticket sales went to support the LifeSkills/Life Consequences drug awareness program for youth at Geneva High School sponsored by University Hospitals Geneva Medical Center (UHGMC).

Rich Phinney, Geneva Rotary Club president, said he was overwhelmed — but not surprised — by the number of people who attended.

"Bring out the chocolate and people flock in," he said. "It's a very popular fundraiser. There are a lot of people in Geneva who donated to the event and who love to support their community. It's always a great fundraiser and this one could be the biggest ever."

Chocolate Fest Coordinator Terri Vincent said they had more than 30 vendors to serve the large crowd.

"We could have about 500 people show up," she said. "That's up from last year. We didn't get as many vendors as last year, but there were lots more people. We were lucky to have three corporate sponsors this year, Wells Fargo, Ashtabula County Medical Center (ACMC) and UHGMC. We could make as much as $7,000 for the LifeSkills/Life Consequences program ... but we won't know until all the proceeds are counted."

She said there were numerous raffles, door prizes and a Chinese and silent auction going on during the event, which would bring in even more for the program.

Amy Richmond, of Geneva, came to the event with her daughter Ashley.

"I love chocolate," she said. "What a great way to raise funds for a worthy cause."

The event was a hit with Ashley as well.

"It's awesome," she said. "I'm a Geneva High School graduate and I love supporting Geneva. I also love chocolate."

Denise DiDonato, UHGMC business development manager, said she was happy with the turnout — and the fact that Geneva's Rotary Club had chosen to support the LifeSkills/Life Consequences program.

"We offered a nice healthy chocolate granola bar at our table and we had lots of people stop by for them," she said. "Most importantly, we're honored Rotary Club chose to support our program. The program should be of great help to Geneva High school students. It's a drug awareness and prevention program that is known to work."

Chris Bush of Ashtabula said it was his second time attending the Chocolate Fest.

"It's a little hard to choose which table to go to because the chocolates all look so good," he said.

Realtor Michelle Bailey-DeFina, of Berkshire Hathaway Real Estate, said she handmade all the chocolate truffles at her table and her associate, Jeannine Yenyo, made other chocolate delicacies — and they were running out early.

"I made 200 cake pops and we gave out almost all of them in an hour," she said. "The truffles were going fast, too."

Laura Meier, rehabilitation director of Ashtabula's Country Club Rehabilitation Campus, had the same problem keeping up with the hordes of chocolate lovers.

"We made 300 jalapeno chocolate peppers and strawberry infused no bakes," she said. "Our dietician, Philip Grof, made enough chocolates to withstand the crowds because we ran out last year, but it looks like we'll run out early this year, too."

"The Geneva Rotary Club does a really fine job with the Chocolate Fest," he said. "I think it's good so many local businesses participated to help sponsor the (LifeSkills) program."