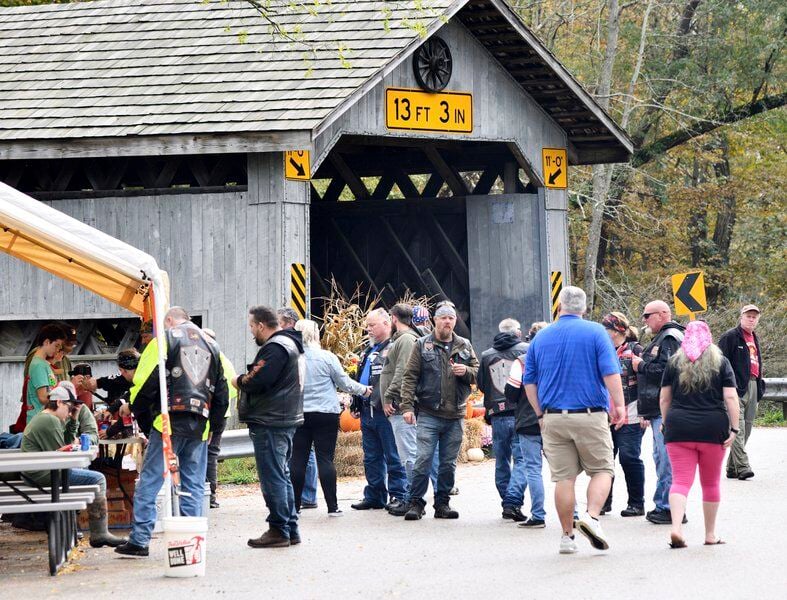 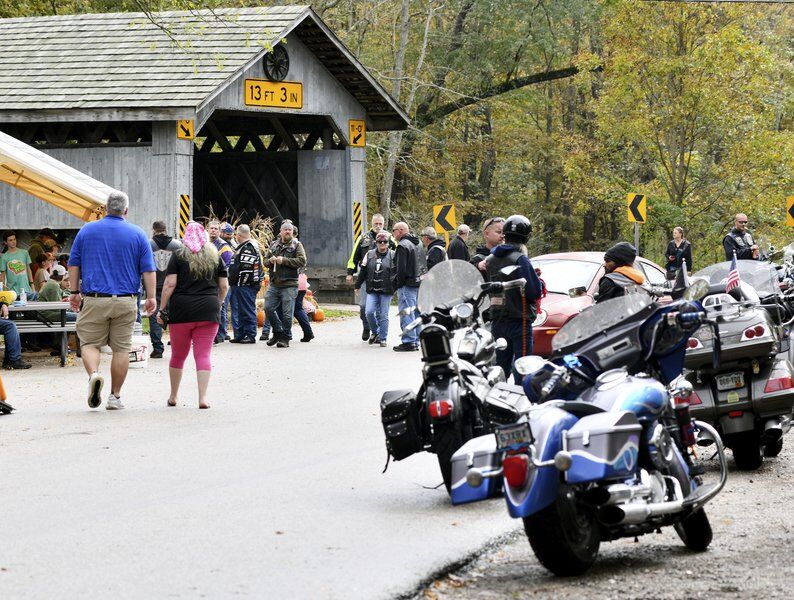 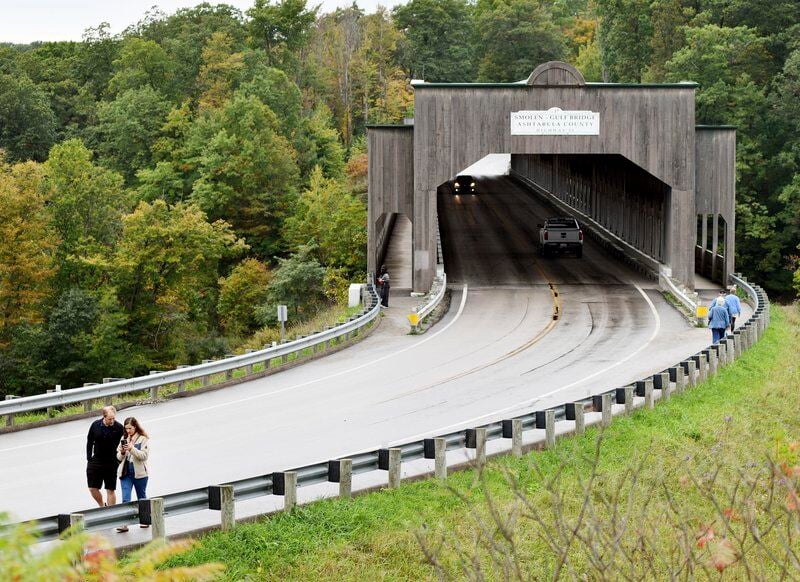 Visitors check out the Smolen-Gulf Bridge on Sunday afternoon in Plymouth Township during the Ashtabula County Covered Bridge Festival. 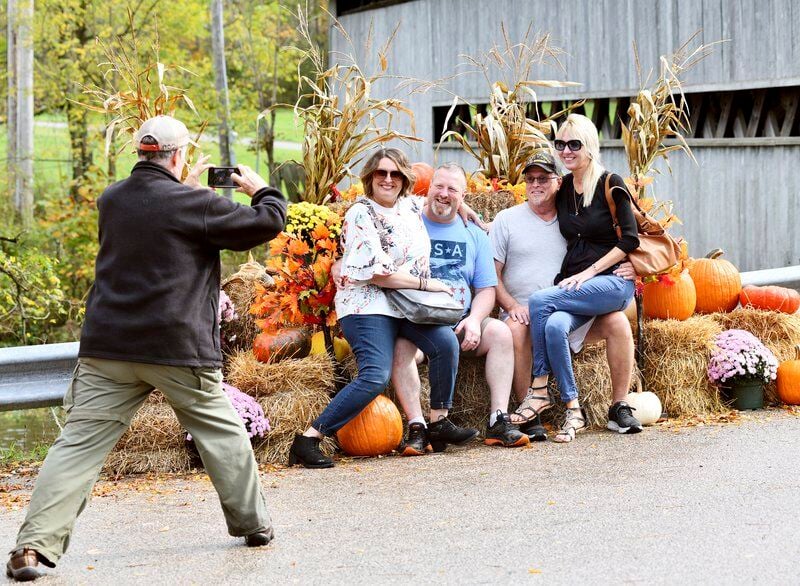 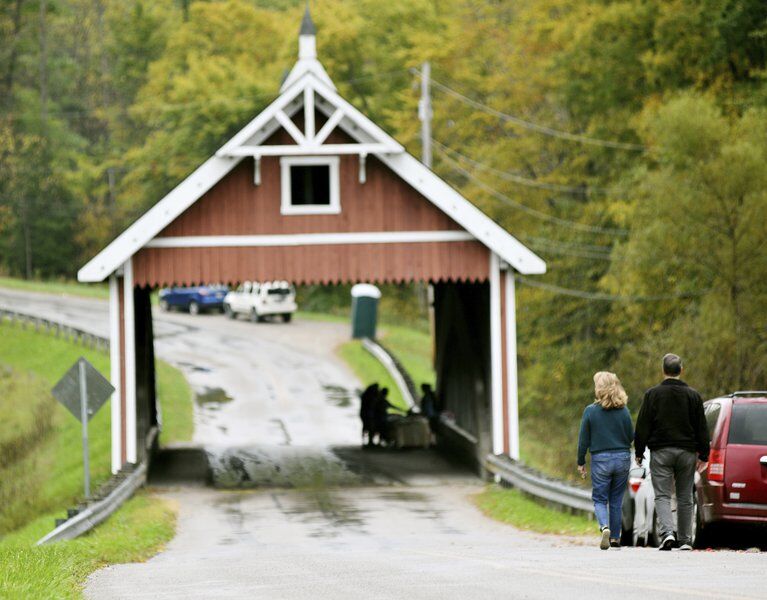 Visitors check out the Smolen-Gulf Bridge on Sunday afternoon in Plymouth Township during the Ashtabula County Covered Bridge Festival.

Visitors spent a lot of time checking out the county’s 19 covered bridges during the Ashtabula County Covered Bridge Festival this weekend.

Steve Neumann and Linda Yuhas, of Timberlake, made the trek from Lake County to enjoy their annual pilgrimage to the bridges.

“We do this every year,” Neumann said.

The festival was canceled last year due to the COVID-19 pandemic, but Neumann still made the trip.

Neumann said he loves the history of the bridges and is fascinated by the durability of the structures.

“Just think what it must have been like when they built this,” he said while standing inside the Netcher Road Covered Bridge.

“Six down and 13 more to go,” Neumann said before leaving for the next tour stop.

Kingsville Boy Scouts of America Troop 41 spent much of the weekend at, or under, the Smolen-Gulf Bridge. The troop was packing up after selling elephant ears and meat sticks as a fundraiser, said assistant scout master Mike Corbitt.

He said the troop got permission to camp out under the bridge so the scouts would then show up for the fundraising activity.

The scouts were leaving around 1:30 p.m. after a successful weekend, Corbitt said.

“We’ve been here for two days and the Browns are on at 4:05,” he said for the reason on why they closed up shop before the 5 p.m. end of the festival.

Joe Misinec worked the East Plymouth Grange booth on Sunday afternoon and marveled at all the out-of-town visitors.

“I would say one out of 10 [visitors] are from Pennsylvania,” he said.

A couple hours of rain didn’t seem to make much of a difference for visitors at the bridges or at Giddings Park, where the bulk of the festival was held on Saturday and Sunday.

“We had a terrific day [Saturday] “ said ACBF Board President Michele Victor.

She said the festival has new board members and officials are looking forward to next year.

“We have some exciting things coming but I can’t tell you yet. She said this was a year of new starts after the festival was canceled last year due to the pandemic.

ACBF Executive Director Ginger Whitehead said the festival went well and even the Sunday afternoon rain didn’t cause too many issues. “A lot of people just put up their umbrellas and kept walking,” she said.

Bob Waples of Newbury just returned to his native Ohio from Colorado and was a passenger on a motorcycle touring the county’s covered bridges.

“Now we are settling back in Ohio,” he said.

At the Doyle Road Covered Bridge Jerry Hulsenbeck, a representative of Troop 41, was selling pumpkins and taking pictures of visitors.

Vicky Tuttle of Plymouth Township said she and her husband were giving a tour of the covered bridges for family in town from Florida.