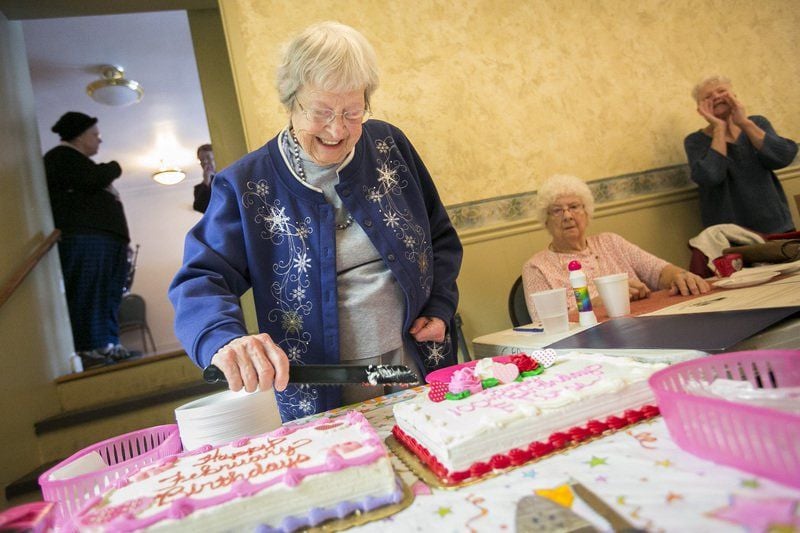 Eloise Fleming, of Geneva, cuts her 100th birthday cake at the Geneva Senior Center on Thursday. The former Geneva High School teacher attributes her age to an active lifestyle, "One thing I say is you just have to keep moving," she said. Fleming will turn 100 on Feb. 28. 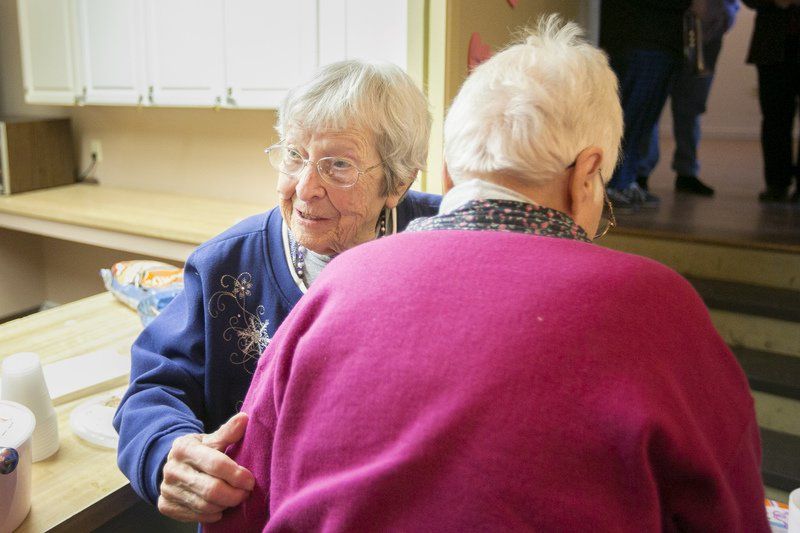 Eloise Fleming, of Geneva, left, celebrates her upcoming 100th birthday with friends at the Geneva Senior Center on Thursday. Fleming will turn 100 on Feb. 28.

Eloise Fleming, of Geneva, cuts her 100th birthday cake at the Geneva Senior Center on Thursday. The former Geneva High School teacher attributes her age to an active lifestyle, "One thing I say is you just have to keep moving," she said. Fleming will turn 100 on Feb. 28.

Eloise Fleming, of Geneva, left, celebrates her upcoming 100th birthday with friends at the Geneva Senior Center on Thursday. Fleming will turn 100 on Feb. 28.

In the case of Geneva's Eloise Fleming, a 100th birthday means a lot more. The centenarian and former Geneva High School biology teacher is still active — playing in the "Off Our Rockers" band, exercising regularly, engaging in bird watching and other nature activities, driving to church and other errands and still living independently at home.

On Thursday, the Geneva Area Senior Center honored her — along with four other Senior Center regulars born in February — with a birthday party. The party also included Robert King, Therese Kuscik, Phyllis Shimko and Dick Whelpley.

"I know I've got a few weeks to go until (her birthday on) Feb. 28, but I'm a little surprised I'm going to be 100," Fleming said. "Still, I'm grateful so many people are showing they care."

"I didn't have her as a teacher, but I hear she was great," Starkey said. "She's an amazing person."

Fleming was born Eloise Koeppe in Amsterdam, Ohio on Feb. 28, 1916. After that her family moved to Aurora.

She attended Kent State University from 1934-38 and received a Bachelor's degree, and in 1941 earned a Master's in biology from Kent State. In February 1943, she married Fredrick Paul Fleming and in January 1944 her first daughter, Phyllis, was born. Her second daughter, Carol, was born in May 1947. Her son, Allen, was born in June 1951.

During the late 1940's and the early 1950's Fleming and her family moved back and forth from Washington state to Geneva. She began teaching biology at Geneva High School in 1956 and stayed there until her retirement in 1976. She still lives in Geneva.

Fleming is in great shape both physically and mentally, and when asked how she stays in top condition she credited the Senior Center.

"I come to the Geneva Area Senior Center twice a week for PACE," she said. "It stands for 'People with Arthritis Can Exercise.' We do as much or as little exercise as we want depending on how we feel. It's a situation where you do what you can, but the results are always helpful."

"She's been doing it for at least 20 years," she said. "The point is getting out and moving. It started at UHGMC back then. There's companionship involved in it too."

Another way Fleming stays young is playing kazoo and washboard in the "Off Our Rockers" band.

"The Off Our Rockers Band is a lot of fun," she said. "We play at nursing homes and assisted living places around three times a month."

She said while playing with "Off Our Rockers"  once, a fellow musician pointed out that one of the people in the audience had her eyes closed and was sleeping.

"I answered back, her eyes were closed but her foot was tapping the whole time," she said.

Chenoweth said the family takes Fleming on vacations every year.

"We've gone to Colorado, New York, Pennsylvania and all around," she said.

Fleming is an avid fan of Cleveland sports teams and, since her retirement in 1976, she's spent a lot of time watching sports on TV.

"I really like track and field, but I guess I'll have to wait to the Olympics for that," she said.

Fleming said one of the reasons she wanted to become a biology teacher was because of the natural things she saw in her early home in Aurora.

"We had fruit trees and there was nature all around, plus my dad was a school principal," she said. "I started with math, but when the time came to get my Master's, it was biology."

State Rep. John Patterson attended the party Thursday and read a proclamation honoring her for her years as a Geneva High School biology teacher.

"I just wanted to wish her a very happy birthday on behalf of the House of Representatives," he said. "She's been an inspiration to all those fortunate enough to have known her for many years. Today is a day to honor her accomplishments."

Harpersfield Township Trustee Ray Gruber called it "quite an accomplishment reaching 100. We wish her all the best going forward."

"Teachers are so important in kids' development," he said. "They are often the first ones to teach us how to live and behave in society. Eloise Fleming has set quite an example."