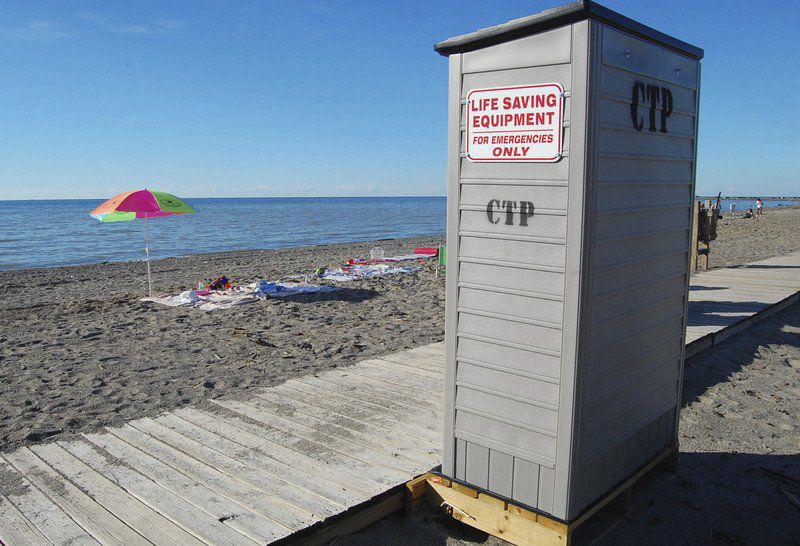 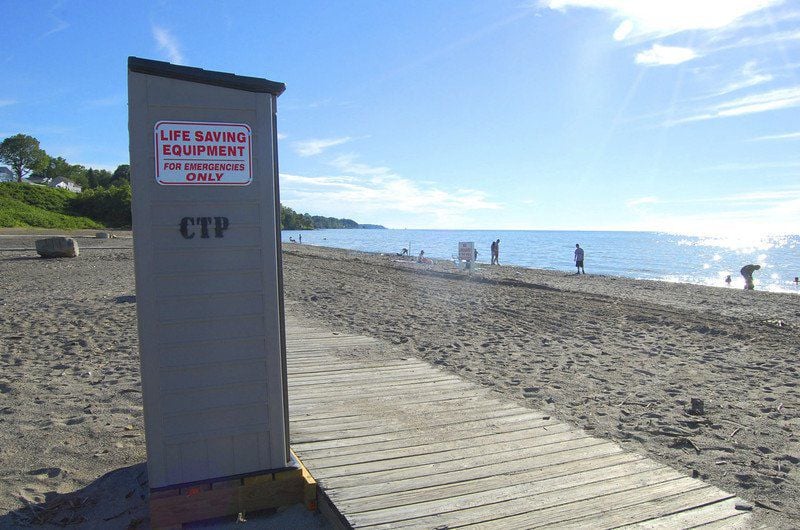 A plastic locker was recently installed along the wooden boardwalk on the west end of the lengthy beach, said James Supplee, a park commissioner. Inside are rope and floatation devices that can assist a swimmer in trouble.

"One of the takeaways was deploying lockers on the west beach area," he said.

The west beach is close to a parking lot, making it more popular with visitors, Supplee said.

"Hopefully (the locker) never has to be used," said Gary Coxon, another park commissioner. "We really hope nothing happens."

The box contains easy-to-use items that nonetheless could make a difference in an emergency, Coxon said.

"It's stuff the average person can handle," he said.

The locker is unsecured to allow quick access. Coxon said he hopes people are respectful of the bin and its contents. The equipment cost a few hundred dollars.

"It could mean the difference between life and death," he said.

The locker is the second piece of life-saving equipment available at the water's edge. Several years ago a 911 emergency call box was installed on the eastern side of the beach.

The park's most recent fatality occurred in June 2016. Jakub Hess, 16, of Hiram drowned while swimming in the lake at Township Park.

Township Park beach has no lifeguards, mainly because of the difficulty in finding lifeguards able to work an entire summer season, officials have said. The vastness of the beach, more than four-tenths of a mile long, is another factor, commissioners said.

So many of the drownings that occur in Lake Erie can be avoided if people take precautions and use common sense, said Dave Benjamin, executive director of the Great Lakes Surf Rescue Project.

"We believe 99.9 percent are preventable," Benjamin said. "Most people don't know drowning is one of the leading causes of accidental death. If people knew, they may exercise extreme caution."

The Surf Rescue Project charts drownings that occur in the Great Lakes. So far this year, six people have died on Lake Erie, according to GLSRP data available on its website. Nineteen people died on the lake in 2016, second only to Lake Michigan in number of fatalities.

This year is heading down a grim path for drownings: 31 people have already died on the Great Lakes (99 perished in 2016), says the GLSRP.

"Thirty-one people," Benjamin said. "That's a high number for this time of year."

Know Before You Go

• Check the National Weather Service for forecasts about dangerous waves and currents.

• Stay dry when waves are high. White water and waves as small as 2-3 feet high can generate dangerous currents.

• When in doubt, don't go out. Respect the power of the water and don’t take chances.

• Steer clear of the pier. Most current-related incidents occur near structures.

• Call for help as soon as you realize you’re in trouble. The closer you get to drowning, the harder it will be to yell.

• Remember to flip, float and follow: flip onto your back and stay calm; float to keep your head above water and conserve energy; follow the safest path out of water (swim parallel to shore and if you're too tired keep floating)

Safely save others from drowning

• Designate someone to watch people in the water as their sole responsibility.

• Drowning doesn't look like drowning. Know the signs of drowning – it’s not like Hollywood with lots of yelling and waving. It’s actually subtle and silent.

• Save yourself first. Don’t become a victim trying to save someone else. Only go out with a flotation device (life ring, kayak, surf/paddle board, cooler, soccer ball) and keep it between you and the victim. Wear a life jacket if available. Have someone call 911.

• Remember preach, reach, throw and row: shout to the victim that help is on the way, try to reach them with a pole or rope, throw them a floatable, get to them on a board or inside a boat, kayak or canoe.

SAYBROOK [emdash] MaryLou Salvatore, 84, died peacefully May 5, 2021 in Saybrook. Funeral Mass is 11 a.m. Monday, May 10, at Our Lady Of Peace Parish Mother of Sorrows Church in Ashtabula, Ohio. www.pottifuneralhome.com