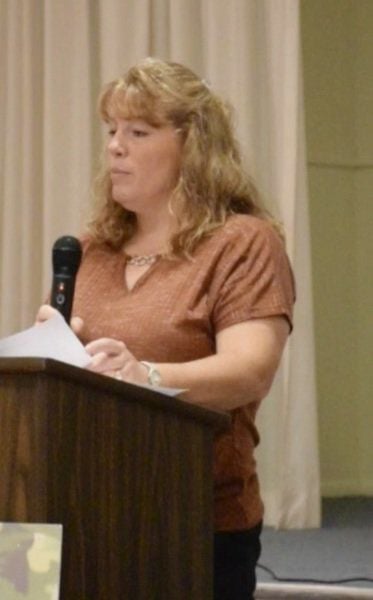 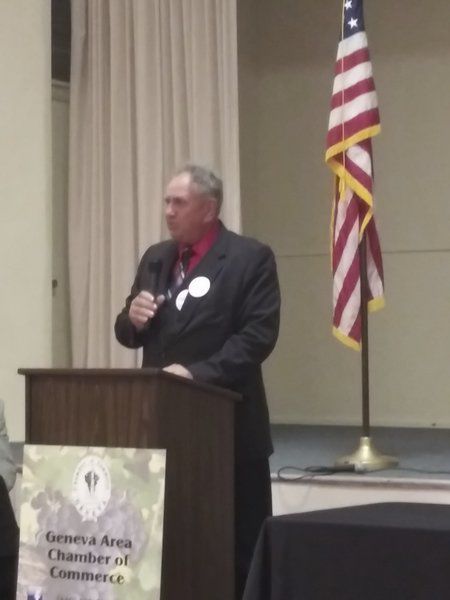 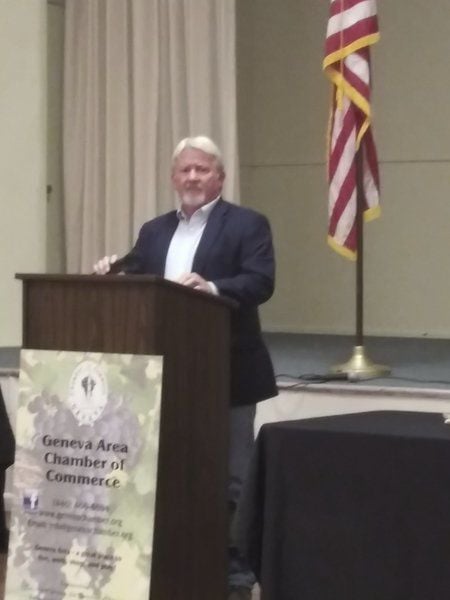 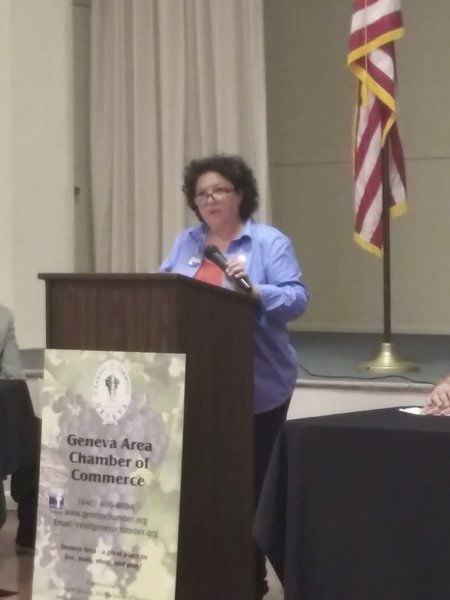 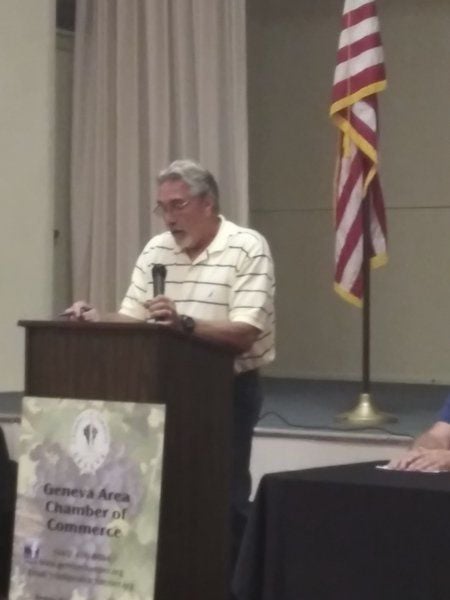 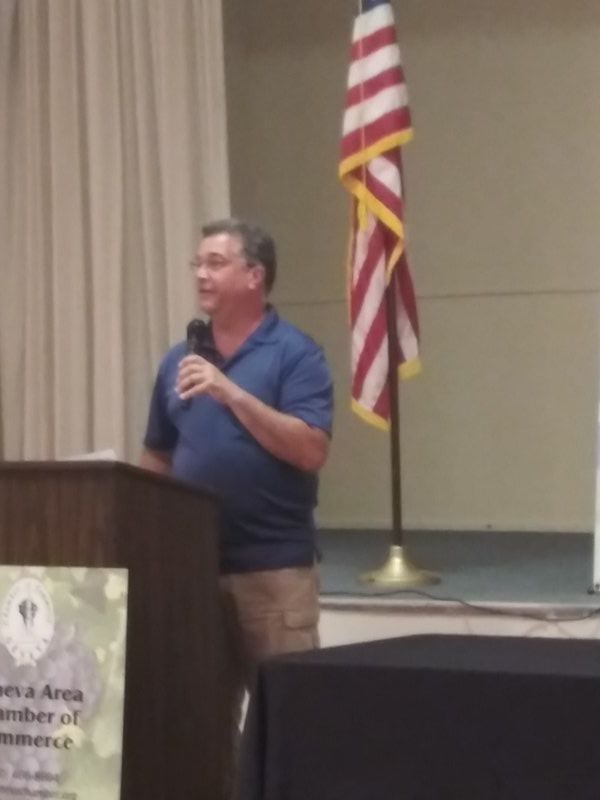 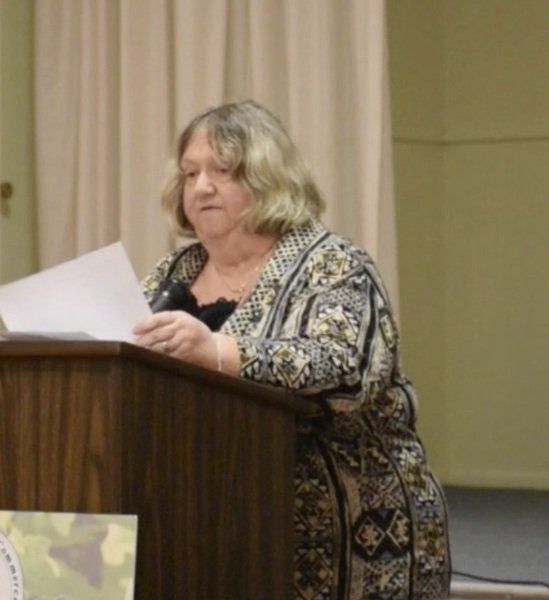 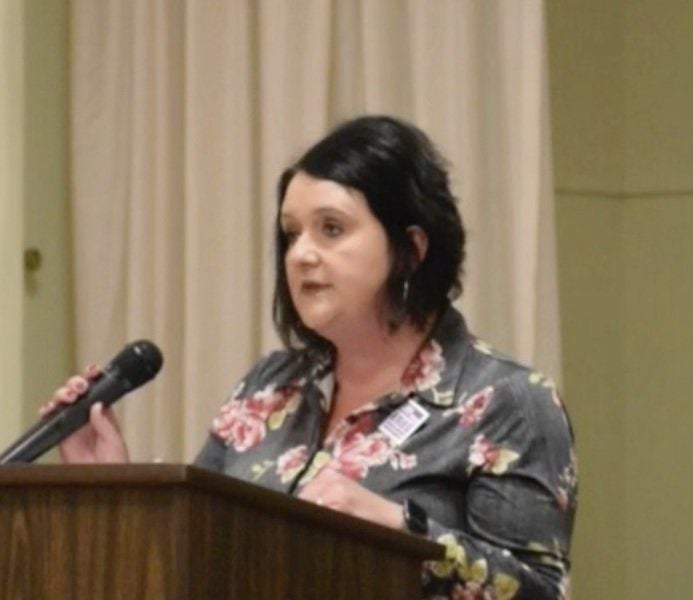 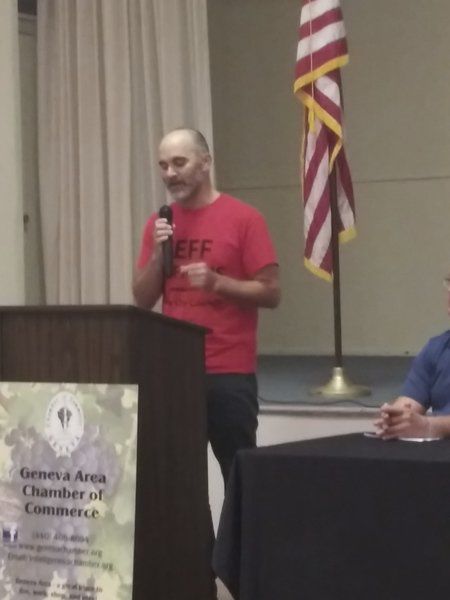 GENEVA — Candidates for various elected positions got a chance to speak directly to voters in Geneva on Wednesday night during the Geneva Area Chamber of Commerce’s annual Candidates Night.

Three contested races in the western part of the county had candidates at the event. The most candidates, four, were running for Geneva city council. Four seats are open, with six candidates running for them.

Phillip Cordova and Mario Butera did not attend the event.

James Baehr, a first time candidate who is running as a write-in, gave his opening speech first. Baehr served as a police officer in Geneva for 13 years, then was a sheriff’s deputy for seven years. Afterward, he served as a coroner’s investigator until his retirement in 2013.

Currently, Baehr is the bailiff for the Western County Court in Geneva.

Baehr announced that his desire is to work with everyone to make the city better.

“I believe I could bring some new ideas and fresh perspective to the city,” Baehr said. “I want to work with council, all the employees and citizens.”

“We believe in this community,” Griffiths said. “I believe I have the unique mix of skill, experience, ideas and vision that can propel the city forward to a shared and prosperous future.”

Griffiths has been meeting with department heads in the city to better his understanding of the city, he said.

“I will do the work,” he repeated several times in his opening statements.

Susan Hagan is the current president of Geneva Council.

“At the heart of every politician, regardless of elected office, should be to do what is best for the greater good,” Hagan said. “It is easy to point out what is wrong, very easy. It takes patience, determination, and a sense that we are all in this together to make for a successful city.”

Robert Rosebrugh was the final council candidate to speak.

Rosebrugh served as a council member previously, before taking a job with the U.S. Postal Service that he said prevented him from serving on council.

“I believe it’s important to have a business person on council, someone who knows the city and knows it’s history, someone with business sense,” Rosebrugh said.

Rosebrugh came out against taxes, and said the best way to raise money was to increase the tax base.

There were also three candidates for two Geneva School Board seats at Wednesday night’s event.

Sarah Fisher, who is currently a member of the board, spoke first, and highlighted her desire for all-day kindergarten in the district.

Fisher started her term on the board with collective bargaining, followed by issues with SPIRE, followed by financial difficulties, and multiple levy attempts, she said.

“These years haven’t been what I had envisioned, but they were very important in the life of the Geneva schools,” Fisher said.

Michele Krieg, a teacher the Maplewood School District, is running for the school board. She graduated from Geneva High School in 1993.

“Our administration needs to be held accountable to be better leaders and make better choices,” Krieg said.

Amber Metzler was the final school board candidate to give her opening speech. Metzler works at the Geneva Library, and has been involved with the Austinburg PTO, she said.

“I have been an involved parent and member of the community not only by being a PTO  officer, but by chairing many functions at Austinburg,” Metzler said.

One audience member asked if the superintendent should have his salary tied to the district’s score on the report card.

All three candidates said no.

“I think the state is still shaking the bugs out,” she said.

Metzler likened the report card to standardized tests for students, and how they change.

“There’s not anyone I know who can hit a moving target,” she said.

Krieg mentioned her own experiences with merit-based pay.

“That is not a way to find success for the state report card,” she said.

Several times throughout the question and answer session, Krieg referenced the district in which she teaches.

The last question was to Krieg alone, asking her if the poverty level in Geneva had impacted the ranking between the two districts.

“I would say no. At Maplewood, we spend less per pupil than Geneva does,” Krieg said.

Two of the four candidates for Geneva Township Trustee attended the event and both spoke to the crowd, explaining their background and skills.

Leroy Caranci, a Vietnam veteran, was a supervisor for most of his military career.

His speech lasted approximately one minute, not including his final comment. “How’s that for short?” Caranci said as he finished his introduction.

Tim Miller currently serves as the Director of the Lake County Storm Water Management Agency, and has lived in the Geneva area for 29 years.

Miller served on the Geneva City Council, both as president and vice president.

“I have extensive knowledge of county and township government,” Miller said.