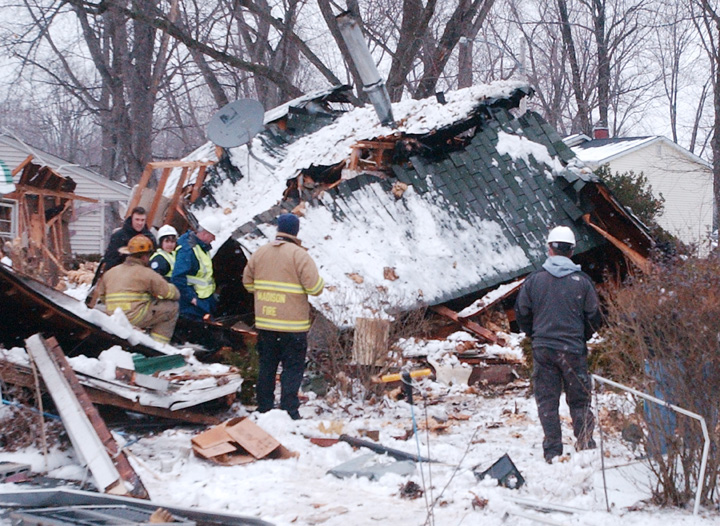 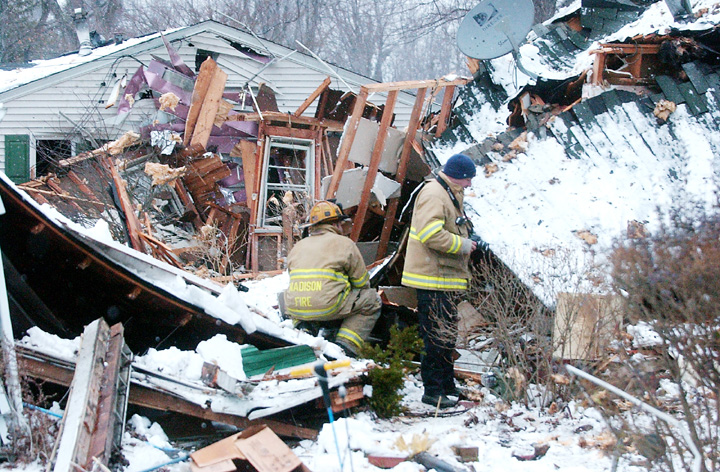 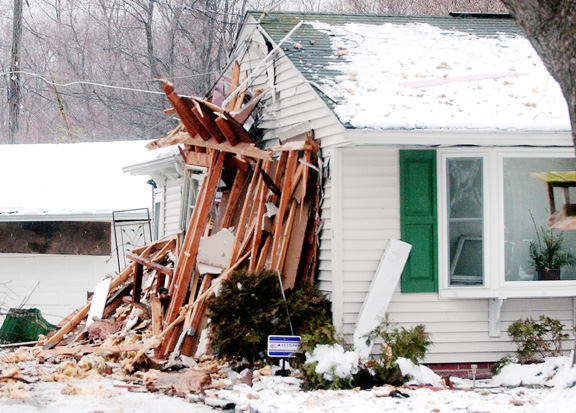 Janet Sency tried to stay warm  while marveling that nobody in her family was hurt when the house next door exploded early Sunday morning.

Sency was wrapped in a blanket while looking at the remnants of 1518 Parkview Place from behind yellow caution tape after the blast that rocked the neighborhood and sent flames into the sky.

“It woke me out of bed. My husband and I. I thought somebody hit the house,” she said while standing with other neighbors. She said her husband ran outside and found the adjacent home had exploded at 12:20 a.m.

Sency shed a few tears as she discussed how her son and granddaughter were sleeping in a room very close to the wall that was struck by debris from the explosion.

While one home was destroyed and seven or eight damaged, nobody was hurt.

“We were very lucky,” Sency said.

The unoccupied home was destroyed, with the four walls falling in toward the center of the structure. The Sency home was badly damaged and five or six other homes were damaged to a lesser degree, said Gene Lutz, chief of the Madison Fire District.

“We received a call for a house explosion at 12:21,” Lutz said. He said the house was already on the ground with a small fire burning when they arrived.

Jessica Seybert lives just across the street from the destroyed house. She said she was asleep and disoriented when she heard the blast.

“I thought it was an earthquake,” she said. “It woke me up from a dead sleep and it felt like a freight train was going by.”

Jim Barchok owns the house behind 1518 Parkview Place. His home was saved by the lucky placement of two garages.

“Our house doesn’t appear to have much damage,” he said, “but that is because the garages took the brunt of the blast.”

Barchok said items in his garage, which is located directly next to the garage at 1518 Parkview Place, were knocked out of place. The clock and spice rack in his house, along with several pieces of his wife’s china, fell to the floor.

An army of Dominion Gas employees, along with firefighters, were on the scene Sunday morning to investigate the cause of the explosion. Lutz said it would probably be several days before the investigation into the cause of the fire is complete.

“First of all I’m glad nobody got hurt,” he said. Anderson said an Ohio Highway Patrol “reconstruction” team was on site early in the morning to help in the investigation process.

Lutz said the fire department received several calls from neighbors after the explosion. Firefighters from Perry, Leroy, Geneva and Harpersfield, assisted at the scene.

Lutz said arson dogs were brought to the scene but there was no sign of accelerants. He said investigators were going step by step to eliminate potential causes of the blast.

The three-bedroom rental home was unoccupied, as the tenant died in July, Lutz said.

The owners said no one had been in the house in months and they had not noticed anything amiss.

A girl, 12, said she saw a man in a black coat leave the house at noon on Saturday. She said she noticed the man “locking the door behind him” on Friday, too.

Debris was littered over the street and several surrounding properties with yellow caution tape blocking portions of a two block radius.

“It’s a disaster inside. It looks like it (the house) may be off the foundation,” Sency said of her home.

Lutz said the Sency family was the only family evacuated but several homes  had windows blown out or damage to roofs or walls.

Barb and Bob Wickert live just 200 feet from the Parkview Place house. They were in their living room just moments before the explosion, but had gone to bed just before broken glass sprayed into their house and then the explosion sucked the debris back out.

“We’re fine,” Bob Wickert said. “God was watching out for us. If it had blown 10 minutes sooner, Barb could have been killed.”

“I thought we were being bombed,” she said. “I thought it was my house that was exploding. There was this bright orange light and a really loud blast and it shook everything.”

Neighbors stood outside Sunday afternoon, watching fire and gas company employees come and go from the scene as a steady line of people drove by to catch a glimpse of the wreckage.

“I think right now we are all concerned about our properties, sure, but we are all just really, really glad no one was in that house. No one could have survived an explosion like that,” Morris said.