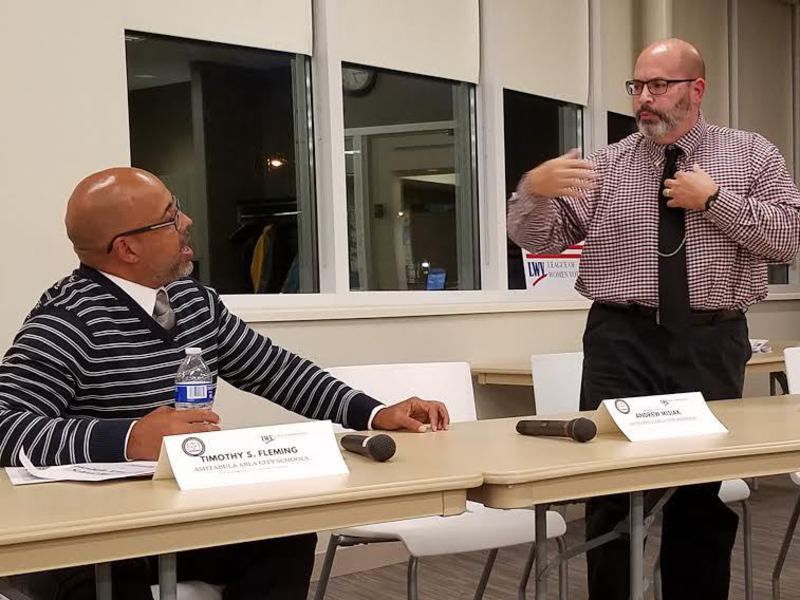 Ashtabula City Schools Board of Education candidate Timothy S. Fleming, left, asks opponent Donald Rapose what he's done to improve racial diversity in the school system. Rapose said he's "lived it" throughout the past 32 years as a teacher and administrator for the school district. 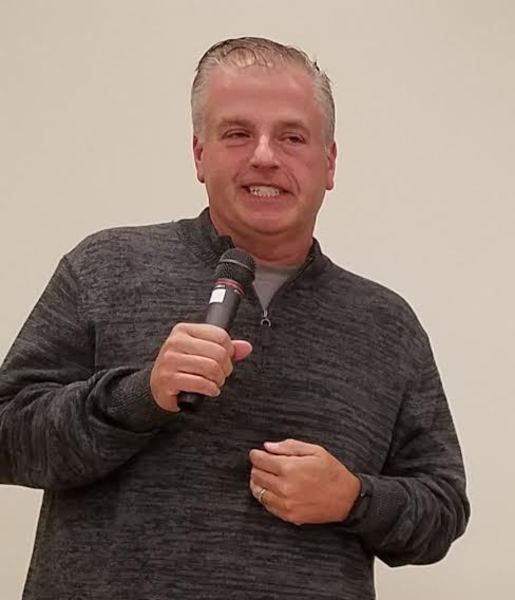 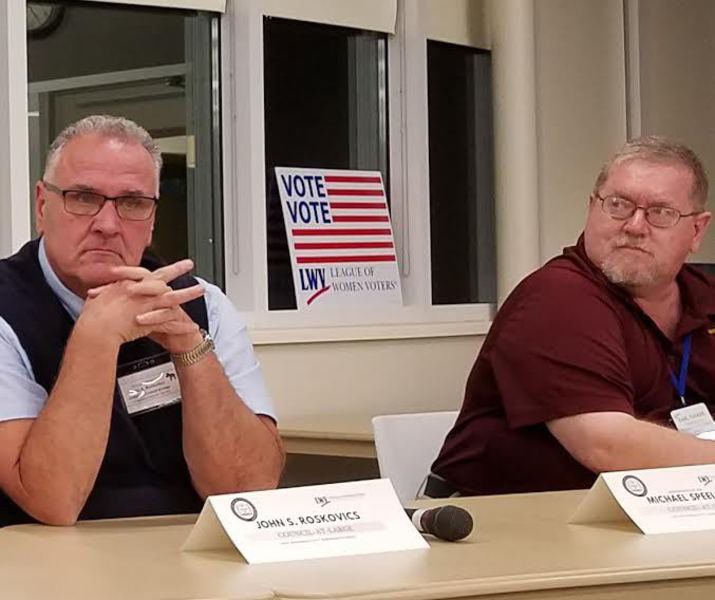 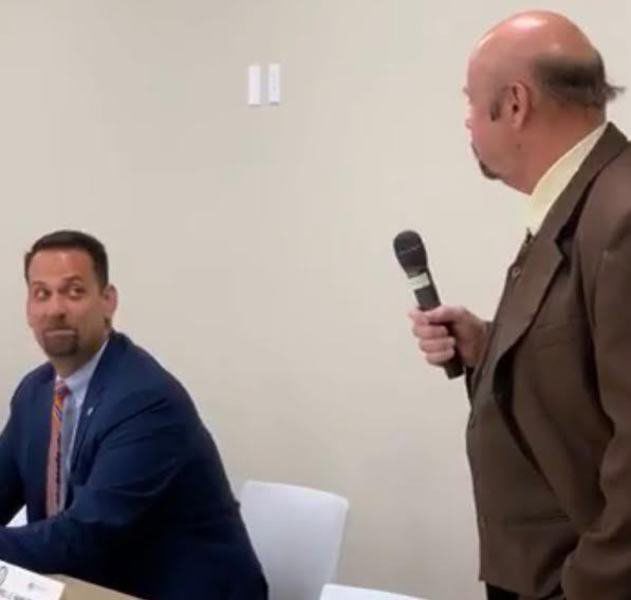 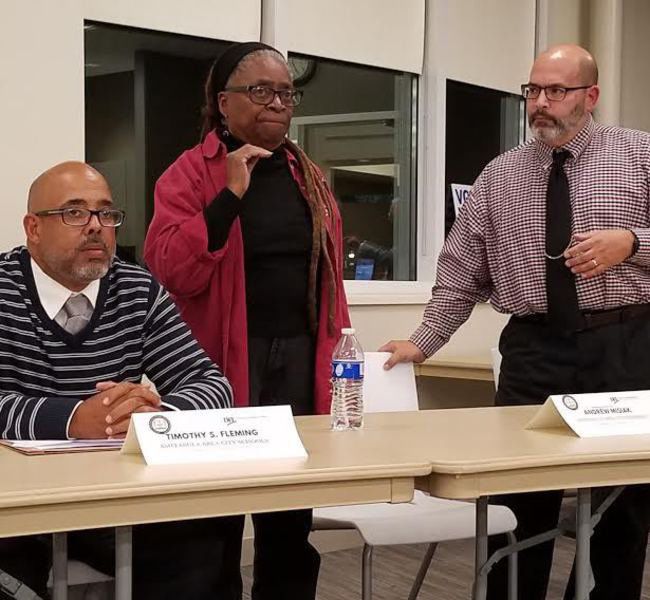 Ashtabula City Schools Board of Education candidate Timothy S. Fleming, left, asks opponent Donald Rapose what he's done to improve racial diversity in the school system. Rapose said he's "lived it" throughout the past 32 years as a teacher and administrator for the school district.

ASHTABULA — The atmosphere was stormy both inside and outside Wednesday night’s Ashtabula City Candidates’ Debate at the Ashtabula County District Library.

More than 50 people attended the 90-minute event moderated by former Cleveland Senator C.J. Prentiss and hosted by The League of Women Voters and the Ashtabula Chapter of the NAACP.

Candidates touched on both the positive and negative aspects of the city and school district, including booming business on Bridge Street, park improvements, downtown development, potholes, drugs and diversity.

Jim Brady Sr., an incumbent and one of four candidates competing for two seats on the Ashtabula Area City Schools Board of Education, introduced himself by listing the “remarkable” accomplishments that have taken place in the district in the past 20 months. The list included the district going from a F to a D on the state report card, buildings and grounds in good repair and wise spending. He also praised the work of Treasurer Mark Astorino and Superintendent Mark Potts.

Timothy S. Fleming, a former substitute teacher, had his turn next but ignored the speaking rules and instead lashed out at Brady and fellow contender Donald Rapose for a lack of racial diversity in the schools.

Following the incident, Fleming’s substitute teacher contract was not renewed, he said.

“Just because I don’t say it the white way, it’s not wrong,” Fleming said. “I’m not playing games when it comes to kids’ lives.”

When asked to answer an audience member’s question he ignored it. When his allotted time to speak was up, Fleming refused to stop talking.

The audience started to rumble with dismay.

Prentiss said, “Mr. Fleming broke the rules, but so what?”

Rapose, retired principal of Lakeside High, then had his opportunity to speak. He said he’s always had a passion for youth. A 1983 graduate of Harbor High School, Rapose returned to Harbor High to teach in 1987, and continued his career in the Ashtabula throughout his entire career.

“I tried to do right about kids in our community,” he said. “I think we have very good leadership at the top right now. You can count on me to always do the best I can do.”

School Board candidate Andrew Misiak could not attend because he was out of town for work, but he had Ashtabula resident Eli Kalil read a statement from him.

When an audience member asked how the elementary campus is working out, Fleming blamed “the gang of Licate, [Gail] Deligianis and [Martha] Shippy” for taking away the district’s neighborhood schools.

Brady said he didn’t agree with the decision either.

If he were on the board at that time, he would have put the elementary school in downtown Ashtabula. Now, the district must bus all children to one of two campuses — Wade Avenue or Sanborn Road — and it’s been difficult keeping enough bus drivers, he said.

Rapose said campus-style schools are designed so if a child moves during the school year, which is a problem in Ashtabula, they don’t have to change schools.

“There’s no going back now,” Rapose said. “The buildings we have, we have and we do the best we can.”

Fleming interjected that the school board’s problem is there’s no racial diversity.

“I’m a passionate individual,” he said. “I have black kids that need me.”

Fleming blasted the board for “having a block party” after the district’s state grade went from a F to a D. He said it wasn’t acceptable.

Rapose said the district has a “diverse population and we try ...”

When Prentiss and NAACP President Liz Penna tried to quiet Fleming, he yelled, “I put pressure on the pipe and I broke them!”

Brady got up and left the library, but not before saying he wasn’t going to tolerate being called a racist.

Prentiss said she spent her entire career fighting for racial diversity and the fact that Ashtabula doesn’t have a single black teacher on staff “makes you want to cry.”

Rapose said a black graduate of the city schools came back a few years ago to teach and then left after a year because there was nothing here for him.

“We try to hire [people of color] but we just don’t have the applications,” he said. “I agree we need more diversity in the school system.”

Penna agreed with Rapose, adding she was disappointed in Fleming’s behavior. When he wouldn’t quiet down, she asked him to leave the room.

“This has been an experience,” Rapose said.

“With Auggie [Pugliese] retiring, I thought it would be a good time to run,” Crawford said. “If you have a question, I will try my best to get an answer.”

If elected, Crawford wants to see the city work on developing projects that will make the city more attractive to existing and future residents, promote economic growth by attracting better paying jobs and develop programs that ensure safety to all residents.

Tucker, a retired paramedic, said he’s always tried to give back. He’s chaired the city’s Parks and Recreation Board for the past 10 years and attends most all city council meetings, volunteering to serve as videographer.

“I know what the job entails,” he said.

Council President John Roskovics, a Democrat running for re-election, said he believes council is doing a good job of planning ahead.

He feels his job on council is like the inspirational quote by Nelson Henderson, PassItOn.com — “The true meaning of life is to plant trees, under whose shade you do not expect to sit.”

An Ashtabula High School graduate, Ward 4 Councilman Michael Speelman, also running for a council-at-large seat, couldn’t attend the debate because of surgery that day, so his father read a statement from him.

A Republican, Speelman and his wife of 24 years, Chrissy, own the Chalk Box on Main Avenue. The Speelmans have lived all over the world while he served 21 years in the U.S. Marines, including tours in Iraq and Afghanistan.

“I will be a well-rounded president or vice president of council,” he wrote.

Speelman noted he’s “honest to a fault” and promised to “hold people accountable.”

Independent candidate Kenneth Vanyo, a former U.S. Marine and retired U.S. Customs agent also running for council-at-large, said his goal, if elected, would be to keep the children here.

“I would try to provide more family recreation,” he said.

Democratic Ward 1 Council person Kym Foglio, a retired Municipal Court clerk, who is running unopposed, introduced herself. She said she enjoyed serving the past two years on council as it “gives an opportunity to give back to the community.”

Last on the debate list was City Manager Jim Timonere, a Democrat, facing off with Independent challenger Darrell Hamilton.

Hamilton took some shots at the manager, charging “he only gets grants to tear down [historical] buildings.”

“In the past eight years, the city has taken several steps backwards,” Hamilton said. “I can remember when this was a really great city.”

Hamilton reminded the crowd he was responsible for getting the former municipal building on the National Historic Register.

He then reviewed several accomplishments of the past eight years, including getting millions of dollars in grant money, removing 300 blighted structures, transforming Bridge Street and the soon-to-come pig iron plant.

“I take pride in my community,” he said.

An audience member brought up Ashtabula’s problem with domestic violence.

Hamilton said the city needs more police officers. Then he said, “Did you know we have a socialist charter? I wrote a new charter but a socialist council wouldn’t pass it.”

Timonere said he didn’t know what a socialist charter had to do with domestic violence.

Hamilton continued to talk about old buildings being demolished when he stopped, turned to Timonere and said, “You are a joke, you know that?”

Hamilton said, “If you want to vote for an idiot, vote for Timonere.”

The audience groaned and Prentiss thanked everyone for coming.

Many people were shaking their heads afterward.

“All in all, it was not a great night for Ashtabula, through no fault of the organizers and hosts,” Tucker said. “I continue to believe Ashtabula is better than this and a great place to live. It’s so sad the actions of so few reflect upon the whole so badly.”

Ashtabula County Treasurer Dawn Cragon said, “Equal and consistent adherence to the League of Women Voters’ rules would have helped calm the tone early on.”