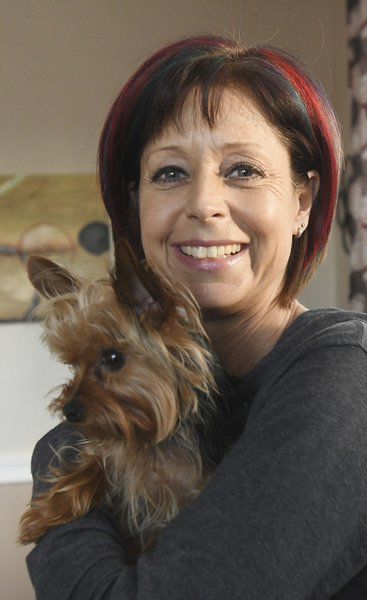 Chrissy Speelman, of Ashtabula, poses with her dog Charlie after recently donating a portion of her liver to help a person in need. 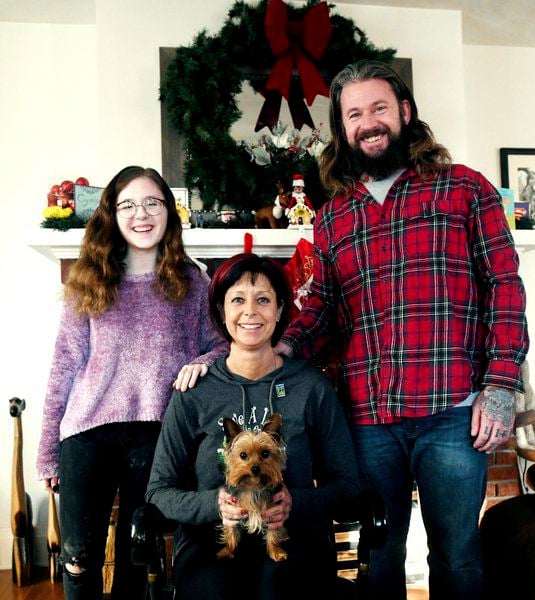 Chrissy Speelman of Ashtabula poses with her dog Charlie and daughter, Jenna, and husband, Michael, after recently donating a portion of her liver to help a person in need. 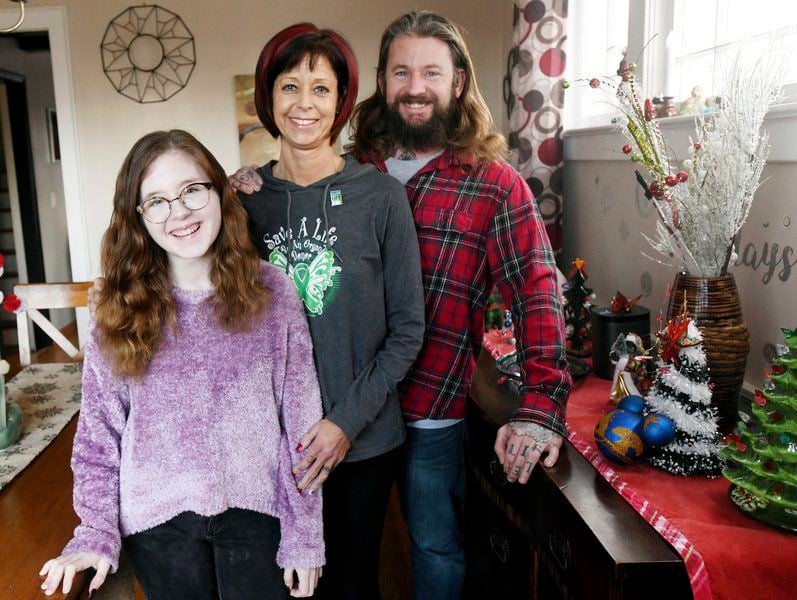 Chrissy Speelman, of Ashtabula, poses with her daughter, Jenna, and husband, Michael, after recently donating a portion of her liver to help a person in need.

Chrissy Speelman, of Ashtabula, poses with her dog Charlie after recently donating a portion of her liver to help a person in need.

Chrissy Speelman of Ashtabula poses with her dog Charlie and daughter, Jenna, and husband, Michael, after recently donating a portion of her liver to help a person in need.

Chrissy Speelman, of Ashtabula, poses with her daughter, Jenna, and husband, Michael, after recently donating a portion of her liver to help a person in need.

ASHTABULA — An Ashtabula family has a special reason to be thankful this holiday season after their wife/mother gave a part of herself that another couldn’t live without.

Chrissy Speelman’s journey to become a living organ donor began a year ago when her friends’ Brittany and Justin Kutscher’s newborn daughter, Katelyn, was born with a liver disease and desperately needed a transplant.

Speelman, 42, heard about the baby’s need at their family’s business, The Chalk Box on Main Avenue. Brittany Kutcher shared Katelyn’s story with Speelman and, when Speelman showed interest in becoming a donor, Kutscher gave her the information for the Cleveland Clinic’s Live Donor Program.

“I talked to [my husband] Michael and [daughter] Jenna about wanting to sign up to see if I could donate a portion of my liver for Katelyn,” Speelman said. “The donor program allows you to sign up to donate for a specific person. I did all the paperwork to be put on the list for Katelyn. Fortunately for Katelyn, another donor was found almost immediately.”

But then, Speelman surprised everyone when she told the doctors at the Cleveland Clinic that she would still like to be a donor.

“On July 15, Katelyn received a liver transplant from a 59-year-old man in Maryland and she’s doing great,” Brittany Kutscher said. “When Chrissy is fully healed, we are going to have a fundraiser and increase live donor awareness.”

Chrissy and Michael Speelman have been married for almost 24 years, and have had “a pretty amazing life together,” said Michael Speelman, a retired U.S. Marine, who was elected vice president of Ashtabula City Council in November. “We have had an opportunity to see the world, meet some unbelievable people, have a wonderful daughter, and move back to Ashtabula to take over a business that we both love — all this pales in comparison to how humbled, inspired and amazed I am by her selfless act.”

When Speelman told her daughter, Jenna, that she wanted to donate part of her liver, the teen was surprised.

“When I found out that Katelyn had found a match I thought that she wouldn’t pursue it further,” Jenna said. “When she said she wanted to keep going, I was surprised but proud and excited. I didn’t really think about the risks until the surgery got close and then I got to thinking about how this could really change our lives in a good way or bad way.”

Chrissy Speelman said their family has been very blessed.

“One of the reasons I wanted to do this was because Michael gave so much of himself in his 21 years in the Marine Corps,” she said. “This was my way of giving back to someone that needed help. Knowing that I am healthy enough to help someone else live made the decision very easy.”

Testing started in July at The Cleveland Clinic. It was three full days of testing, which included an MRI, CAT Scan, ultrasounds, psychological evaluation, questionnaires, lab testing on her blood that required 35 vials in one day, and an interview with her husband to make sure he agreed to the procedure.

After July, there were numerous phone calls, various vaccinations and different medicines to prep for the surgery.

“They encouraged me to continue my healthy lifestyle and try to avoid getting sick,” she said. “Then, I got the call at the beginning of October.”

As with any surgery, there was a risk of death, infection, and even a risk of Speelman’s liver failing. There is also a risk of the recipient rejecting her liver and then having to cope with that psychological and emotional pain. There is also the burden of being off of work for eight weeks and the possibility of having difficulties returning to an active lifestyle.

The entire surgery was done laparoscopically, so Speelman only has five small incisions, meaning there will be minimal scarring. This is the Cleveland Clinic’s eighth such operation.

“In about a year, my liver will have regenerated to about 99 percent of its original size,” she said. “Many people don’t realize that the liver will regenerate, which makes live liver donation possible.”

She doesn’t know anything about the person who received part of her liver. In three months, if they want to meet, the Cleveland Clinic will arrange it, she said. “All I know is that the surgery was successful and they are doing well.”

For the next few weeks, Speelman can not lift more than five pounds and she must walk and rest so she can get her strength back.

Now that the surgery is over and her mother is on a successful road to recovery, Jenna said she’s proud and happy that her mother could save someone’s life — just in time for the holidays.

“I also hope this will bring attention to how many people need transplants and how important live organ donors are,” she said.

Her husband said he admires and loves his wife more than ever.

“Without any hesitation or thoughts of how this could possibly be harmful to her, she willingly volunteered to give a piece of herself to a total stranger, and that person has received the gift of life from her,” he said. “I am a hard person to impress, and she impresses me to no end.

“In society when children seem to look to television, or the internet, or to professional athletes to find someone to admire; how lucky are we that our kids in Ashtabula can look to Chrissy as a hero. The kids at The Chalk Box will have their very own hero to talk to every day and Jenna and I are lucky enough to live with our very own Super Hero.”

JEFFERSON- Donna Ellen Doyle, 73, passed away very peacefully July 3, 2020 with her husband by her side at Hillcrest Hospital in Mayfield. Funeral arrangements will be announced by the Czup Funeral Home, 1329 Lake Ave. Ashtabula.