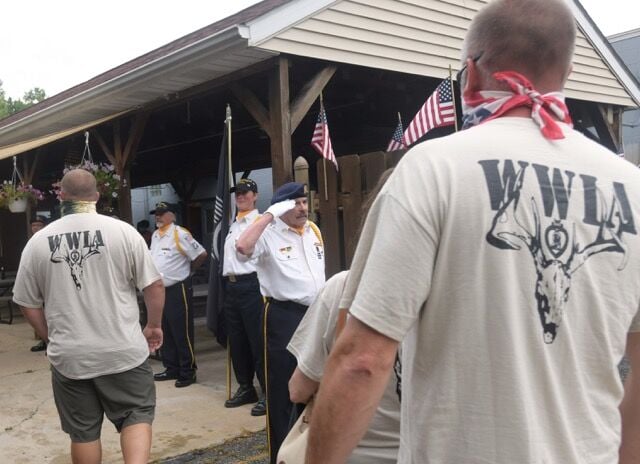 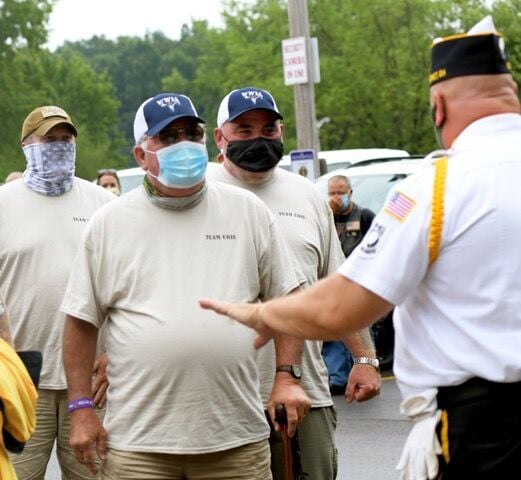 ASHTABULA — Nine Purple Heart recipients were given a grand welcome to the area on Saturday as a motorcycle escort showed the men from all over the country around town before a steak dinner was served at the American Legion Post on Carpenter Road.

He said honoring the veterans who were injured is important.

"It is the greatest honor we could have is to honor our veterans," Adley said after welcoming the men to the post after the ride around town.

The legion post partnered with Team Erie, a branch of the Wounded Warriors in Action program, that partners veterans with outdoors interests for weekend trips throughout the United States.

Jim Dottore led the motorcycle group and said the Ashtabula Police Department has been very helpful each year providing an escort for the event.

He also thanked Jerry Cornelius, also of the APD, for leading the motorcyclists.

"It was great. It didn't rain," Dottore said of the tour.

Larry Fielder of Euclid helped coordinate the event for the WWIA. He said he the organization facilitates getting the soldiers together and then they get along like they have been lifelong friends.

"The elderly are telling the young ones you can get through," he said.

Gary Herbert, who lives in the Atlanta area, said he served in the U.S. Army from 2007=1,2 including a stint in eastern Afghanistan, where he was injured.

"What a great welcome this community has showed us," he said.

Herbert said there were people on their lawns waving to the veterans.

Guy Patterson, a Vietnam Veteran from Tampa, Fla., said he served in Vietnam from 1968-70. he also appreciated the reception.

"I have never been in this part of the country and I find it refreshing," he said.